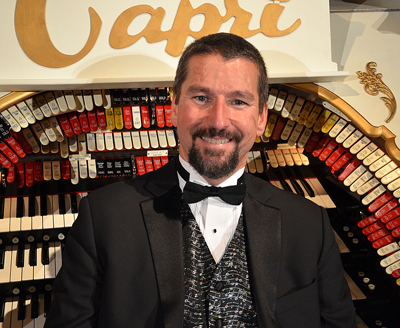 The Oklahoma History Center is pleased to welcome Dave Wickerham as the featured organist for the July 2019 Kilgen Organ performance “Salute to America.” This presentation will be Monday, July 15, from 7 to 8:30 p.m. and will take place in the Devon Great Hall. Tickets are $10 for Oklahoma Historical Society members and $20 for nonmembers, and may be reserved by calling 405-522-0765. Doors will open at 6 p.m. and seating is on a first-come, first-served basis. The Oklahoma History Center is located at 800 Nazih Zuhdi Drive in Oklahoma City.

Wickerham’s “Salute to America” will be comprised of dozens of well-known compositions that are intended to pay tribute to the patriotic spirit of all Americans, as well as to honor those servicemen and servicewomen who have defended the freedoms enjoyed in the United States.

Wickerham is recognized worldwide for his versatility on the theater organ and his popular recordings. Among the hundreds of venues where he performs and the thousands of dates that he books are various chapters of the American Theatre Organ Society, a society of like-minded and astute performers. In April of 1999, he took great pleasure in being a feature artist in Melbourne, Australia, for the convention of the Theatre Organ Society of Australia, for which he received rave reviews. He returned “Down Under” for six-week concert tours in Australia and New Zealand during the summers of 2003 and 2012, as well as October and November of 2015.