Pawnee Bill Ranch and Museum will host a traveling exhibit, Smoke Over Oklahoma: The Railroad Photographs of Preston George, from April 23 to June 23, 2021. This collection of 25 black-and-white images represents the railroad photographs taken by Preston George during the 1930s and 1940s.

George photographed trains in his spare time while working as a civil engineer in Colorado and Oklahoma. Born in 1906 in Indian Territory, George’s interest in trains began at an early age but did not culminate into a full-fledged pastime until the 1930s.

“I ran across a copy of Railroad Stories, later renamed Railroad Magazine, and saw the many photos of locomotives and trains,” said George in an interview during his lifetime. “This started me on a new hobby. . . . Soon, I was snapping still pictures of locomotives with a cheap Kodak camera and trading them far and wide with other fans.” 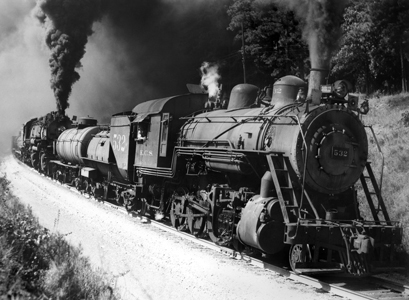