On Saturday, June 12, at 1:30 p.m. the Oklahoma Historical Society (OHS) will host “Legacy of the Tulsa Race Massacre,” a roundtable discussion on how race relations developed in Oklahoma after one of the state’s most horrific events, the Tulsa Race Massacre. The panel will present several perspectives that represent different aspects of the state’s African American community. This conversation will take place at the Oklahoma History Center, and limited seating will be available on a first-come, first-served basis. The event is free and open to the public.

Moderated by J. D. Baker, special assistant to Oklahoma City Mayor Holt, the panel will include Brenda Alford, who will share her family’s story of surviving the Tulsa Race Massacre; Oklahoma State University professor Dr. Brandy Thomas Wells, who will provide historic context for and ramifications of the massacre; and Rev. Dr. Robert Turner of Historic Vernon Chapel A. M. E. Church, who will give the perspective of a community leader in Tulsa.

Dr. Brandy Thomas Wells earned her Ph.D. at Ohio State University and is a professor of history at Oklahoma State University. She is currently preparing a book manuscript that analyzes African American women’s international interests and activities from the 1890s through the 1960s. Her work illuminates how members of the National Association of Colored Women’s Clubs and the National Council of Negro Women pursued anti-colonial and anti-imperialist agendas, and how they communicated, cooperated, and competed in the overall quest for civil and human rights. Dr. Wells’s essays have appeared in the journal Origins and the collection “Women and Modern Empire, 1840 to the Present.”

Reverend Dr. Turner is the pastor of the Historic Vernon Chapel A. M. E. Church in Tulsa. He is also the academic dean for Jackson Theological Seminary in Little Rock, Arkansas. Turner is on several boards and involved in many other organizations in Tulsa, including for the American Village, Crutcher Foundation, and the North Tulsa Task Force. Since coming to Tulsa in 2017 he has become a tireless advocate for Greenwood. Through his leadership, the church has been placed on the National Register of Historic Places.

J. D. Baker serves as the special assistant to Oklahoma City Mayor David Holt. He is a sixth-generation Oklahoma City resident who graduated from the University of Oklahoma with a bachelor of arts in public relations. While at OU, he received the Clara Luper Department of African and African American Studies Leadership Award. Along with his position in the mayor’s office, Baker serves on the Board of Directors for the Oklahoma City Black Chamber of Commerce. He was recently recognized in the top five of Oklahoma City’s “Most Powerful Young Professionals” by OKC Friday newspaper for the second year in a row.

This roundtable discussion is sponsored by the OHS’s Black Heritage Committee and the Oklahoma History Center Education Department. For more information about the event, please call 405-522-6676. 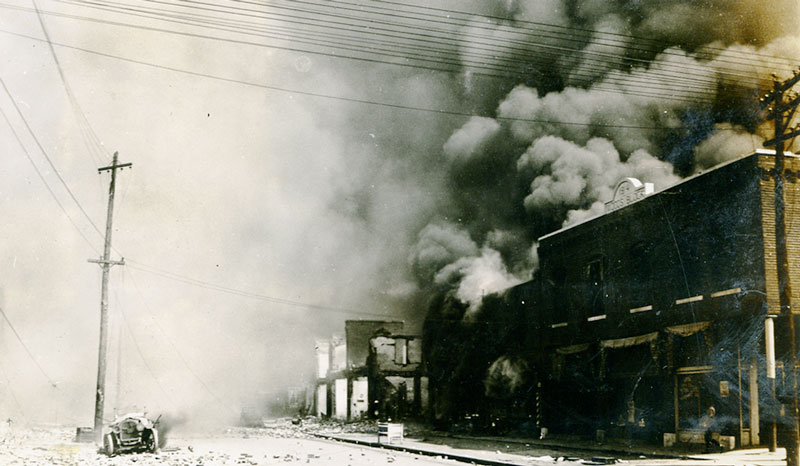