Found in the Century Chest 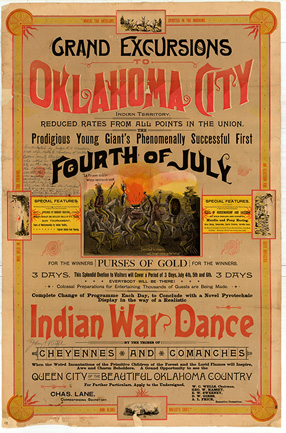 A rare color poster promoting a Fourth of July celebration in Oklahoma City was found in the Century Chest, opened April 22, 2013.

The Fourth of July celebration of 1889 was designed to be a grand event, bringing in up to twenty thousand visitors to the fledgling town. In early June of 1889, a committee was formed to arrange the celebration, and the first order of business was to secure reduced railroad fares into Oklahoma City, the second to secure land to the east of town (in what is now Bricktown) to build a baseball diamond and horse track. By June 26, 1889, the plans for the Fourth of July celebration were mostly complete. Cheyenne, Arapaho, and Caddo Indians had been recruited from Darlington, and permission from the Department of the Interior for the two hundred plus Indians to leave their reservations was granted. A parade route which would take participants down California, Reno, Harvey, Robinson, Grand, and Main Streets had been mapped. The list of activities over the course of the three-day celebration was decided upon and included the following: horse racing, feats of horsemanship, sack racing, Indian war dances, infantry drills, a baseball game, and a gun tournament.

The Oklahoma Gazette, a local Oklahoma City newspaper, followed the preparations daily and noted on June 7, 1889, “This will be the first grand excursion to Oklahoma, and will if properly managed be but a second April 22nd to the beautiful land.” However, by August 1889, the event would be known by the same paper as “the Fall of Babylon” due to the crash of the grandstand at the horse track on the first afternoon of the three-day event. The 4th of July celebration, which fell far short of its expected twenty thousand visitors, nevertheless was a triumph for a city that was feeling somewhat desperate after the initial excitement of the land run on April 22, 1889.

To find out even more about the July 4 celebration of 1889, view Bricktown's First Fourth of July published in The Oklahoman.