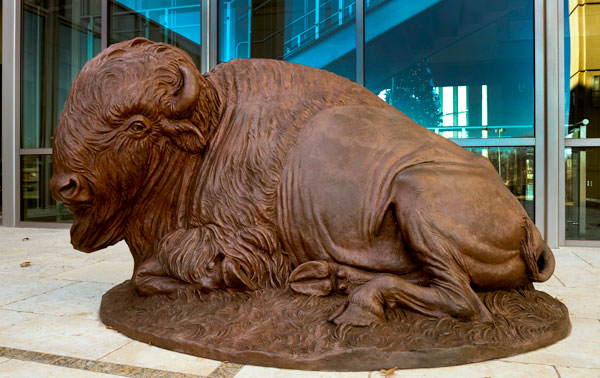 Monarch at Rest is a larger-than-life bronze sculpture created by renowned artist Harold T. Holden. This graceful sculpture captures a bison, the monarch of the plains, in a restful moment.

Holden attended Oklahoma State University and graduated from the Texas Academy of Art in Houston, Texas. He then began his art career in the commercial art field, eventually taking the position of art director at Horseman Magazine. After a tour of duty with the Navy in the Vietnam War, Holden returned to the United States to begin a full-time career as a professional artist.

Holden is a member of the Texas Cowboy Artists Association and the National Western Artists Association and has also been elected as a Professional Member of the National Sculpture Society. He has received numerous awards and accolades, including the Oklahoma Governor’s Art Award and the Lifetime Achievement Award from the Oklahoma Sculpture Society. He is known for his attention to detail and particularly his sculptures of horses. Believing that an artist should know his subject matter, Holden spends much of his leisure time team roping and staying close to the cowboy way of life.

The Monarch at Rest sculpture is made possible through the generous sponsorship of John Groendyke.