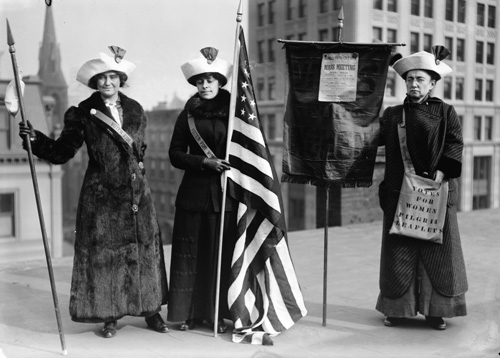 The Oklahoma History Center is celebrating the 100th anniversary of women gaining the right to vote in Oklahoma with a new exhibit. Votes for Women features twenty-eight black-and-white photographs from the Oklahoma Historical Society’s archives and the Library of Congress highlighting some of the key moments and events, and the people who fearlessly led the way. Three reproduction postcard illustrations will also be on exhibit.

This exhibit will be on display in the Chesapeake Event Center and Gallery through October 26, 2019. This room also is utilized for meetings and events. Please call in advance to make sure the exhibit is open to the public on the day of your visit.

On March 16, 1917, the Oklahoma Legislature passed a resolution allowing a referendum on the suffrage amendment in the November 1918 general election. On November 5, 1918, the suffrage amendment to the Oklahoma Constitution was ratified by a vote of 106,909 to 81,481. Equal suffrage nationwide for white women was not granted until 1920 with the passage of the Nineteenth Amendment to the US Constitution. African American women did not get full voting rights until the Voting Rights Act of 1965. Oklahoma women continued to fight until 1942 for the right to hold state executive offices.