The 45th Infantry Division was the only unit to ship straight from the United States into the battle to take the Island of Sicily from the Axis Powers in June of 1943. The other units who fought had been in North Africa for a year and were already veterans of the war. Despite being a "green" unit, the 45th fought as well as any of the other divisions in taking Sicily.

After taking the Island of Sicily in thirty-eight days, the Allies then launched an attack on Italy. Italy was a member of the Axis Powers. After the Allies took Sicily, Italy surrendered. Because the Nazis occupied Italy, soldiers in the 45th fought only German troops from now on.

Italy is a small country with many mountains, so the fighting was slow because it was hard to move trucks, food, tents, and ammunition through mountains. The Allies tried a risky attack to sneak behind the Germans. They landed troops in boats at a place called Anzio. The Germans were ready for the attack, though, and they trapped the 45th in Anzio for 135 days. The Germans attacked the 45th every day during those months, but the 45th never gave up. The 45th was able to break out of the siege and capture Rome, the capital of Italy, on June 4, 1944.

A wrecked Panzer IV on the beach near Salerno (image courtesy of the National Archives Signal Corps Records). 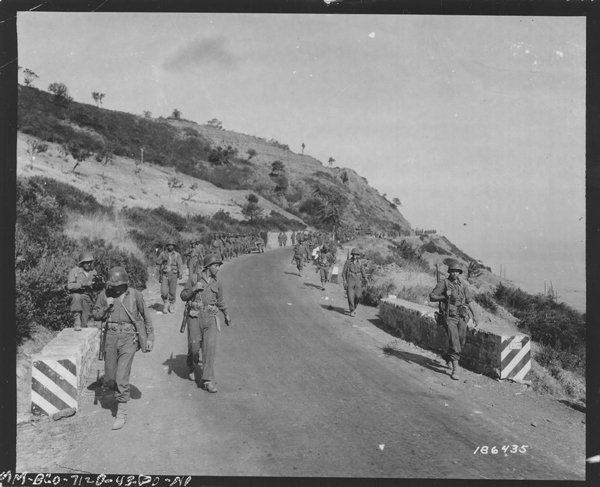 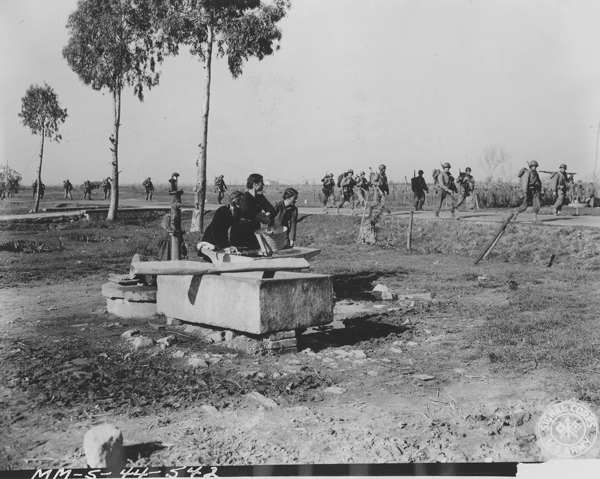 Soldiers of the 179th Infantry Regiment on the way to the front, north of Salerno, as Italian citizens watch while gathering water from a well (images courtesy of the National Archives Signal Corps). 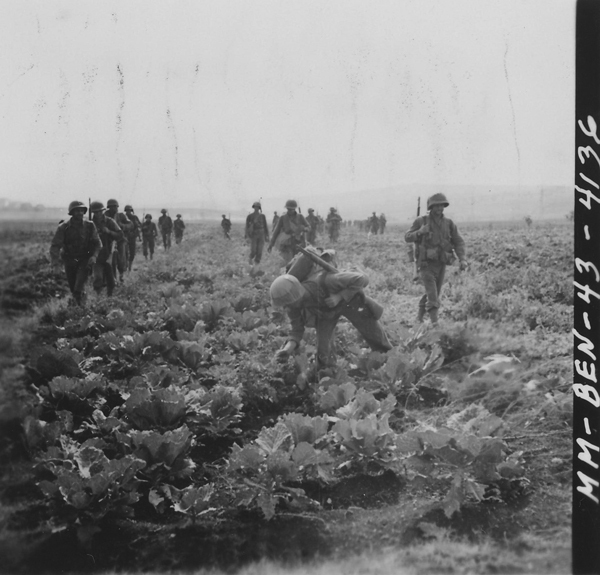 Soldiers from the 157th Regiment marching towards Ponte, Italy. One of them has stopped to pick a tomato (image courtesy of the National Archives Signal Corps). 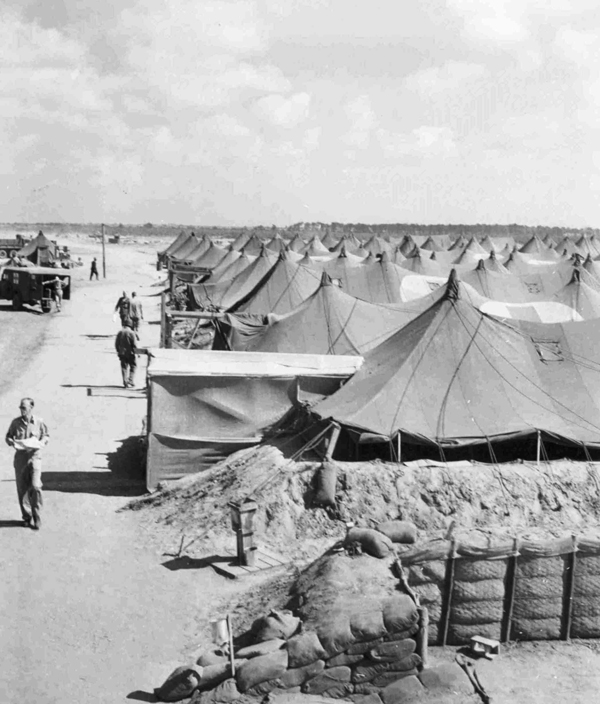 The Anzio beachhead was under almost constant fire from German artillery for months. If a structure couldn't be built into the ground for protection, the ground had to be built up around the structure with sandbags and piles of dirt (OHS Collections). 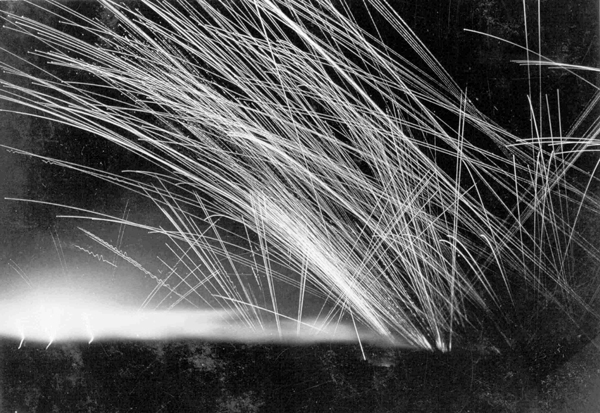 Allied gunners are fending off a German air raid at night. The streaks of light are tracer rounds, meant to help gunners see where they are shooting when in low light conditions. There is usually one tracer round for every five live rounds (OHS Collections).

The Italian campaign was very difficult. The mountain terrain made the armies move slowly and gave the German defenders an advantage. Late in 1943, Prime Minister Winston Churchill made a plan to take some of the troops from the Allied forces in Italy and land them from naval craft in an amphibious assault behind enemy lines, just south of Rome, near the city of Anzio. There was a lot of arguing about the plan. Some people thought it was too dangerous, and others thought it needed more men than Minister Churchill had put forward.

The attack, codenamed Operation Shingle, was scheduled to begin on January 22, 1944. The Allies attacked with two divisions, the US Third Division and the British 1st Division with the 45th Infantry in reserve. The first few days were greatly successful for the Allied soldiers, as they caught the Germans by surprise. The Allied troops used this time to set up supply depots and defenses on the beachhead while taking some territory from the Germans. The Germans responded to the landings quickly and three days after the Allied landings, they had the beachhead surrounded by eight divisions with five more on the way.

The Allied troops buttoned up and dug in for defense. The 45th Infantry moved forward to the center of the Anzio defensive line, the most important position in defense. For the next six months the men of the 45th would hunker down as German artillery shelled the beachhead day and night. There were many times when German attacks pushed deep into the 45th lines, but they never broke. Eventually, the Germans wore themselves out attacking the entrenched Allies, and the Allies took that chance to attack. On May 31, the Allies at Anzio broke out of the beachhead and raced towards Rome. Five days later, on June 5, 1944, the troops would take the Italian capital city of Rome. 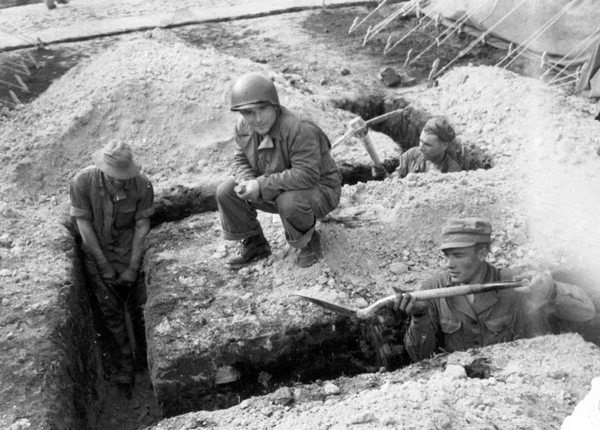 In order to move safely from place to place, soldiers dug slit trenches that a person could dive into if a German artillery barrage began.

Despite being under fire every day, soldiers on the Anzio Beachhead tried to carry on normal life activities like getting married. Lt. Genevieve Clarke of Pennsylvania married Lt. Thomas Rose of Ohio on March 27, 1944. After the wedding, Lt. Clarke cut her wedding cake with a trench knife (image courtesy of Google News).