The other problem was the rivers in Europe. Europe has big rivers, like the Rhine, that are difficult to cross without bridges. The Rhine is a wide river that separates Germany from France, so the Nazis destroyed the bridges across the Rhine as they retreated home. The 45th Infantry had engineer units, so they rebuilt bridges or built new pontoon bridges to get across the rivers and into Germany. 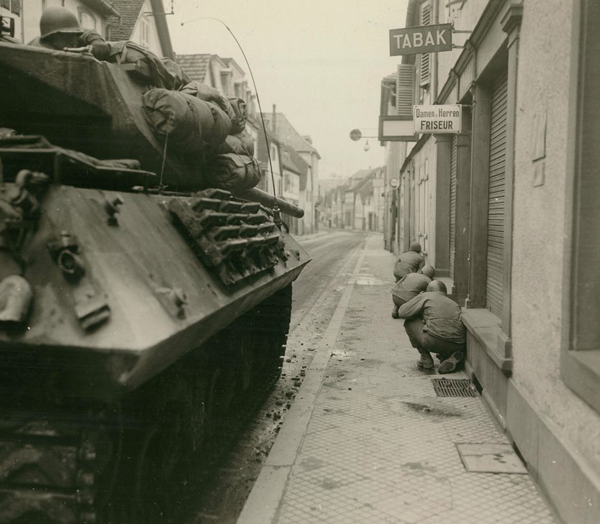 Soldiers from the 45th are under German artillery fire in the French town of Niederbronn (image courtesy of the National Archives Signal Corps Records). 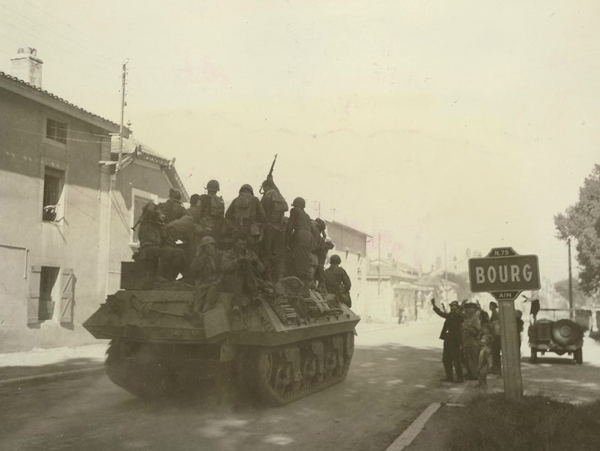 Soldiers of the 45th load up on a tank to chase after German soldiers withdrawing from Bourg, France (image courtesy of the National Archives Signal Corps Records). 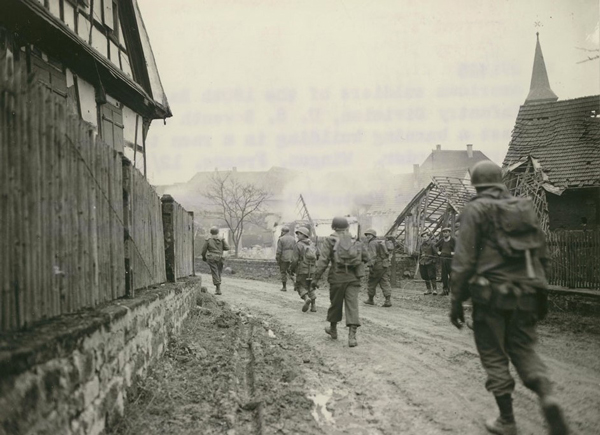 Soldiers from the 180th Regiment are marching past a burning building in Wingon, France (image courtesy of the National Archives Signal Corps Records).

After chasing the German Army through Southern France, the Moselle River stood between the Seventh Army and the territory of Alsace-Lorraine. Germans during World War II thought Alsace-Lorraine belonged to Germany. It was a territory taken by France from Germany after World War I, which Germany had taken from France after the Franco-Prussian War. It was also populated mostly by German-speaking, French peoples. This meant many of the German soldiers fighting in this area felt like they were fighting for their own home, so they fought more fiercely for it.

The 45th Infantry Division was tasked with crossing the Moselle River at Epinal and taking the city. To do this, the 157th Regiment attacked north of Epinal at Igney and the 179th attacked south of Epinal at Arches. The 180th Regiment had the hardest time, fighting head-on through the city of Epinal. It took two days of fighting for the 180th to reach the western border of Epinal, and then they had to fight building to building to clear the town. The 180th was in a hurry because French spies had told them there were two bridges across the Moselle River that were still standing. These bridges could help the 45th get tanks and artillery over the large river.

The Germans realized they were losing, so they planned to evacuate and blow the bridges after they crossed. This only slowed the 45th for a day, as men crossed in boats and the 40th Combat Engineers built a Bailey bridge for the bigger trucks and tanks, all while being shelled by German artillery.

While the 45th were still liberating France for a few weeks, the Germans were now fighting for their homes. 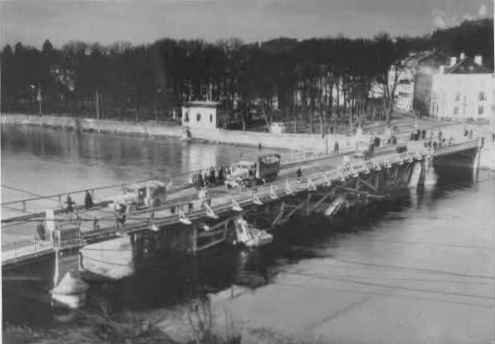 A Bailey bridge, built by H company, 40th Combat Engineers, over the Moselle River in Epinal. The Bailey bridge used the pylons from the original bridge, which was destroyed by the retreating Germans, as its supports (image courtesy of Don Jackson).

This picture shows the destruction in Epinal shortly after the Germans withdrew. Residents built the small, plank footbridge to cross back and forth across the Moselle River (OHS Collections). 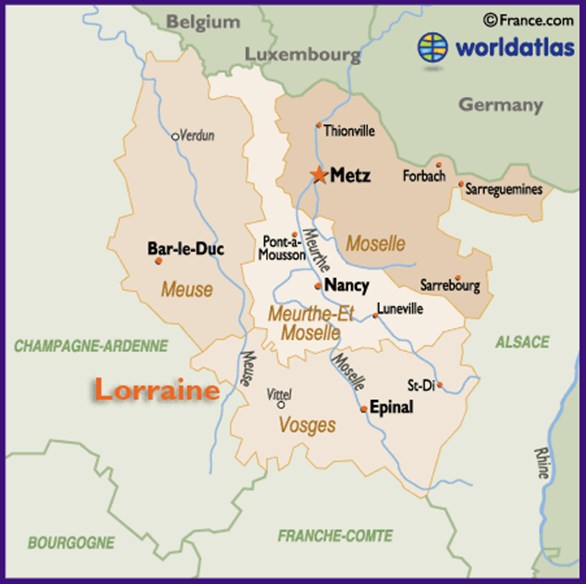 A French map of the Alsace-Lorraine region, which France and Germany had been warring over for seventy years by the time the 45th arrived. The Moselle River runs through Nancy and south to Epinal (map courtesy of World Atlas).