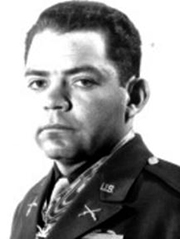 Jack Montgomery was born on July 23, 1917, in Long, Oklahoma. He was a member of the Cherokee Nation and a graduate of the Chilocco Indian Agricultural School. He is one of three graduates from Chilocco to have earned the Medal of Honor, making the Chilocco School one of the smallest schools in the United States to have graduated so many Medal of Honor recipients. While attending Bacone College, Jack joined the 45th Infantry Division in 1936. Montgomery left in 1938 to attend Redlands University in California and returned to Muskogee, Oklahoma in 1940. After the attack on Pearl Harbor, he signed up with the 45th again and served with his old unit, the 180th Infantry Regiment, through the entire war in Europe, until 1945.

By February of 1944, Jack Montgomery was a First Lieutenant in I Company of the 180th Regiment. While defending the beachhead at Anzio, Lt. Montgomery's platoon came under fire from three fortified German positions. Lt. Montgomery single-handedly assaulted those positions with covering fire from artillery and his men. His actions that day earned him the Medal of Honor.

Later that day, Lt. Montgomery was wounded by mortar fire and taken to the field hospital on the Anzio beach. He was eventually evacuated back to the United States where he recovered and returned to service with a training army in Texas. He was serving there when he received his medal from President Franklin Delano Roosevelt. Jack Montgomery left the service in 1945 and spent the rest of his life in Oklahoma. During World War II, Jack Montgomery was awarded the Medal of Honor, two Silver Stars, and two Purple Hearts. He passed away at the age of eighty-five and is buried in the Fort Gibson National Cemetery. The Veterans Health Administration medical center in Muskogee is named after Lt. Montgomery. 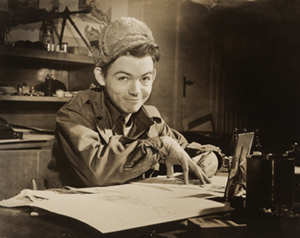 Bill Mauldin at work (image courtesy of the Library of Congress).

Bill Mauldin was born on October 29, 1921, in Mountain Park, New Mexico. He grew up in Phoenix, Arizona, and took some courses at an art school in Chicago before joining the 45th Infantry Division in 1940 at the age of nineteen.

It was not long before his friends in the 45th noticed his ability to draw cartoons. By the time the 45th was shipping out to Sicily, Bill was a regular contributor to the 45th Division News, a paper printed by and for the men of the 45th. Eventually, people outside the 45th noticed his drawings and liked them as well. Bill's most famous cartoons were of two soldiers named Willie and Joe. Bill drew Willie and Joe as a way to poke fun at many of the problems that soldiers faced on the front lines. The soldiers in the 45th and elsewhere loved Willie and Joe, and Bill's cartoons led to him getting a job with Stars and Stripes, the Army newspaper. Soldiers all over Europe would come to love Willie and Joe as much as the men in the 45th did.

Not everyone liked Bill's cartoons. Often, Willie and Joe complained about the officers in the Army, and this did not make some officers very happy. One famous example is General George C. Patton. General Patton was in command of the American forces that invaded Sicily, and he thought that Bill's cartoons bordered on being mutinous. General Dwight D. Eisenhower, who was in command of all Allied forces at that time, forbade General Patton from punishing Sgt. Mauldin because he knew how much the soldiers at the front liked Willie and Joe. This didn't stop General Patton from saying he'd arrest Sgt. Mauldin if he "ever saw him again" to a journalist giving him an interview.

Sgt. Mauldin's cartoons even made it into some of the papers in the United States. One of those cartoons even won him a Pulitzer Prize at the age of twenty-three, making him the youngest person ever to receive the award. Mauldin went home to his wife and son after the war and continued drawing cartoons. He won the Pulitzer Prize again in 1959. He lived until the age of eighty-four and is buried in Arlington National Cemetery in 2003. 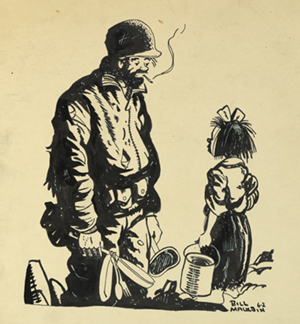 The Prince and the Pauper, February 28, 1944 by Bill Mauldin (image courtesy of the Library of Congress).

Sgt. Mauldin on drawing the "dogface" soldier:
"I don't make the infantryman look noble, because he couldn't look noble even if he tried. Still there is a certain nobility and dignity in combat soldiers and medical aid men with dirt in their ears. They are rough and their language gets coarse because they live a life stripped of convention and niceties. Their nobility and dignity come from the way they live unselfishly and risk their lives to help each other. They are normal people who have been put where they are, and whose actions and feelings have been molded by their circumstances. There are gentlemen and boors; intelligent ones and stupid ones; talented ones and inefficient ones. But when they are all together and they are fighting, despite their...griping and goldbricking and mortal fear, they are facing cold steel and screaming lead and hard enemies, and they are advancing and beating...the opposition."

General Middleton was born in Copiah County, Mississippi, on October 12, 1889. He grew up on his father's 400-acre plantation until he left for school at Mississippi A&M (now Mississippi State University) in 1904. He graduated with a bachelor's degree in 1909 and hoped to go to West Point. He was unable to get an appointment to the Military Academy, so he signed up as an enlisted man in 1910. 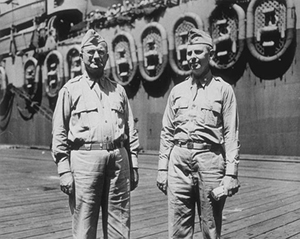 Middleton quickly distinguished himself in the army as a talented rider, able clerk, and a popular football player. At that time, football was a sport endorsed by the US Army, and General Middleton once said he "never met a good football player who wasn't also a good soldier." After two years in the Army, Middleton passed an exam at Fort Leavenworth, Kansas, to earn a commission as a second lieutenant. He then transferred to Texas in the 7th Infantry Regiment.

Lt. Middleton and the 7th Infantry Regiment participated in the occupation of Veracruz, Mexico in 1914, but returned to Texas after seven uneventful months. He married Jerusha Collins in Galveston, Texas, in 1915 and traveled with the 7th Infantry Regiment into Mexico again, this time under the leadership of General Pershing, to chase after Poncho Villa, a Mexican revolutionary who had attacked American border towns.

Lt. Middleton was promoted quickly as World War I approached, and he traveled with the 47th Infantry Regiment, 4th Infantry Division to Europe as a Captain. There, he would serve as a reserve unit for the badly battered 42nd Division. Middleton rose through the ranks quickly, serving with distinction and leaving World War I as a colonel. He and other officers would form the first instructors of the Camp Benning Infantry School. Middleton spent the next ten years of his career as an instructor or student at various War Colleges across America. One of his students was a young man from Abilene, Kansas, future general and president Dwight David Eisenhower, even though Middleton was only one year his senior.

On Sunday, December 7, 1941, Middleton was dove hunting with his son. When they returned to his home for lunch, his wife informed them of the attack on Pearl Harbor. Middleton immediately wrote to the War Department to offer his services. He was reinstated as a Lt. Colonel and told to report to Camp Wheeler, Georgia.

After some quick promotions, now Major General Middleton was placed in command of the 45th Infantry Division and took over their training at Camp Pine, New York. General Middleton commanded the 45th Infantry through Sicily and Italy, but had to leave before the amphibious landing at Anzio. He had injured his knee playing football as a young man, and now the pain was so bad he could barely walk. Despite this, Eisenhower wanted General Middleton in command of VIII Corps in England. A sergeant who was a physical therapist before the war was assigned to care for the General's knee until the end of the war.

While in Europe with VIII Corps, Major General Middleton commanded his troops with distinction, earning him a Distinguished Service Medal from Lt. General Patton. In December of 1944, he also managed to upset General Patton when he refused to withdraw his troops from Bastogne during the Battle of the Bulge. Middleton commanded VIII Corps until the end of the war, when he retired from the Army for good. He spent the rest of his career at Louisiana State University and retired in 1962 as the LSU President. Despite retiring, Troy Middleton spent the rest of his life in public service to the State of Louisiana in various roles. He passed away in 1976, three days before his 87th birthday. He is interred in the Baton Rouge National Cemetery with his wife who died in 1980.

First of all, he had moral courage, and he had common sense, and he took full advantage of all the experiences he'd had. You know, I like that saying attributed to Napoleon, that the genius in war is the man who can do the sensible thing or an average thing, when everybody else around him was crazy. Well now, that was Troy Middleton...I was impressed always by his complete command of himself and of the situation...Troy typified what you think of as the best in the Regular Army. He was intelligent, dedicated, and loyal. He always acted according to the old aphorism: Always take your job seriously and never yourself. If the war had gone on, he would certainly have led an army because we were still bringing in people. —former United States President Dwight D. Eisenhower