The first people living on the prairie were the ancestors of various American Indian tribes. Through archaeology, we know that the plains have been inhabited for centuries by groups of people who lived in semi-permanent villages and depended on planting crops and hunting animals. Many of the ideas we associate with American Indians such as the travois, various ceremonies, tipis, earth lodges, and controlled bison hunts, come from these first prairie people. Through archaeology, we know that the ancestors of the Wichita and Caddo tribes have been in present-day Oklahoma for more than 2,000 years. Their impact can still be seen today in Oklahoma.

For more information on what archaeologists do and how they uncover clues about the past, see the archaeology section. 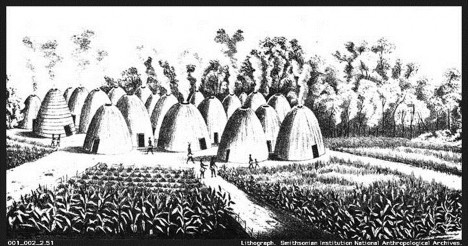 Life on the Great Plains

The first known tribe in the plains area was the Pawnee who lived in earth lodges part of the year and in tipis during the summer and fall hunts. The earth lodge tribes such as the Arikara, Hidatsa, Mandan, Omaha, Oto, Ponca, Pawnee, Wichita, and Winnebago, among others, planted crops such as corn, squash, and beans and stored their food in underground storage caches. Their semi-subterranean lodges held from ten to forty people.

Several lodges were grouped together to form villages. Smaller groups went out with tipis for the bison hunts, returning to the earth-lodge for winter.

Other tribes associated with the Great Plains were the Lakota-Sioux, Cheyenne, Arapaho, Comanche, Kiowa, and Crow, among others. They lived mainly in tipis, traveling through the plains region. These groups were the great hunters of the plains following the bison or "buffalo" and foraging for berries, roots, and other plants. They lived in extended family relationship groups, traveling to familiar places and encampments. Often, they traded and warred with the earth lodge dwellers.

When the prairie was changed by the coming of Euro-Americans the culture of the prairie tribes was dramatically affected. The prairie tribes were moved off their traditional homelands onto reservations by the United States government to make way for the new settlers. They were forced into a new lifestyle that was very different from their own. 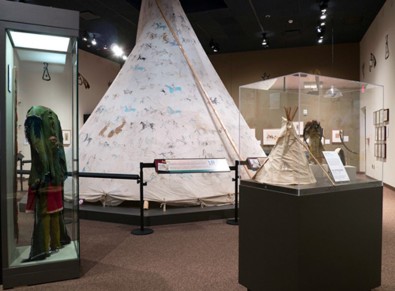 Tipi with Battle Pictures. This tipi was traced back to 1833 when Little Bluff became the sole leader of the Kiowa people.

We Are Who We Were, American Indian exhibit at the Oklahoma History Center 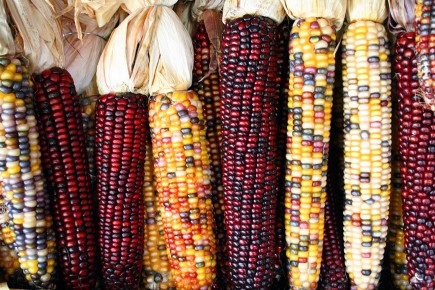 Plains Indians who had semi-permanent homes planted gardens and maintained small farms. Here is a picture of maize, or corn, an important crop totribes (image courtesy of Wikimedia). 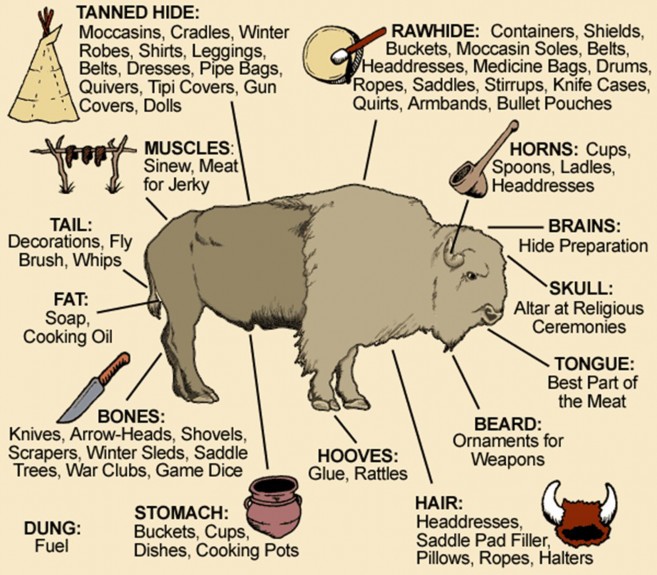 Plains Indians honored the buffalo by using every part of the animal and not letting anything go to waste (image courtesy of the South Dakota Historical Society).