History of the Five Tribes 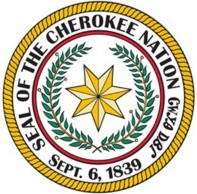 (Seal courtesy of the Cherokee Nation.)

Oklahoma's largest tribe of American Indians, the Cherokee Nation, with approximately 240,000 people, was one of the tribes removed to Oklahoma in the 1830s by the United States government. The Cherokee homeland is in the southeastern portion of the country. Before contact with the Europeans, Cherokee people owned little land and were a hunter-gatherer warfare tribe. Their families, unlike Anglo-American families, were matrilineal, which means tracing the mother's family rather than the father's family. Once removed to Oklahoma, the Cherokee began to adapt and expand their nation. This includes becoming the first tribe to have a written syllabary for their language. They also created higher education institutions for both men and women. During allotment by the Dawes Commission they lost most of their land and wealth, leading to impoverished tribal members. After World War II many Cherokee returned to their homelands from combat overseas and began to revitalize and rebuild their nation. Today the Cherokee Nation continues to grow and expand their economic and cultural independence led by their headquarters in Tahlequah, Oklahoma.

(Seal courtesy of the Chickasaw Nation.) 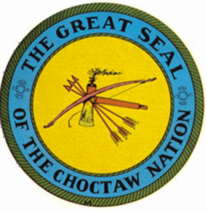 (Seal courtesy of the Choctaw Nation.)

The Choctaw Nation's homelands were in Mississippi before they moved to the southeast part of Oklahoma with the Treaty of Dancing Rabbit Creek 1830. More than 5,000 Choctaw were removed to present-day Oklahoma and began to rebuild their community and government. They began to build schools of higher learning such as the Wheelock Academy. Later, railroad companies began pushing for the opening of their lands, at least a part of it, so they could build a track through it. During the Civil War, the Choctaw Nation was one of the tribes who allied with the Confederacy and had to sign over parts of their land and government as punishment after the war. Today the Choctaw Nation is headquartered in Durant, Oklahoma, and they continue to revitalize and rebuild their culture and language. 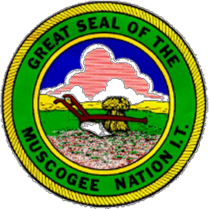 (Seal courtesy of the Muscogee Nation.)

The homelands of the Mvskoke (Creek) people are located in and around Alabama as evidenced in the mounds built during the influence of the Mississippian culture. With the contact of European explorers, such as Hernando De Soto, epidemic disease killed thousands. During the Civil War, the Creek were an ally of the Confederacy. Currently the capitol of the Creek Nation is located in Okmulgee, Oklahoma.

(Seal courtesy of the Seminole Nation.)

The Seminole people at one time were a part of the Creek Nation in Georgia and Alabama but separated and moved to northern Florida. In the beginning of the nineteenth century, most but not all of the tribe was forcibly removed from their homelands and relocated to present-day Oklahoma. They were placed within the Muscogee (Creek Nation) initially, but later signed a treaty establishing themselves as the Seminole Nation. During the Civil War, most Seminole sided with the Confederacy.

Today the headquarters are in Seminole, Oklahoma, and the tribe continues to revitalize their culture and the Muskogee language.