After the Civil War, the United States government set out to solve what they called the "Indian problem." The "Indian problem" was the dissatisfaction many white Americans felt with American Indians and their life on reservations. Because many tribes were forced to live on reservations that they could not leave, the US government had promised rations of food and supplies. This way, tribe members did not have a reason to leave the reservation to hunt. After a while, though, whites became impatient and no longer wanted to give American Indians their promised rations. Many had hoped that Indians would become assimilated, which means to take in or absorb someone else's culture. The US government wanted American Indians to act and dress like whites and to have labor jobs like farming instead of living in tribal communities like they had for generations. The push for whites to assimilate American Indians led to the creation of boarding schools, conflicts and Indian Wars, and, eventually, the dividing of tribal lands into allotments. 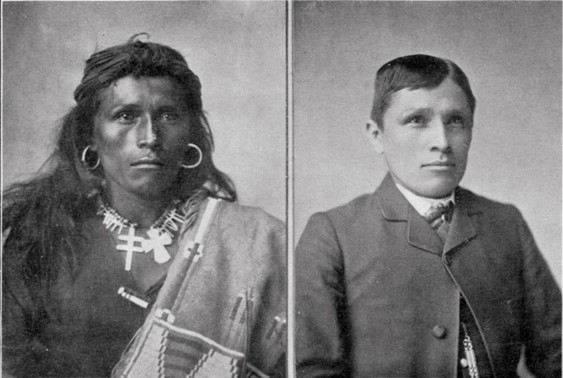 Indian boarding schools were special schools funded by the government or tribes themselves for American Indian children only. These schools were created to take Indian children away from their parents and tribal communities and to assimilate them into white culture. American Indian children would be forced to cut their hair, wear mainstream or traditional American clothing, learn about Christianity, and speak only English. The children were taught basic reading and writing skills as well as manual and skilled labor trades like sewing and cooking for girls and farming and construction for boys. The most famous Indian boarding school was the Carlisle Indian Industrial School in Carlisle, Pennsylvania. Jim Thorpe, a Sac and Fox member called the greatest athlete of the twentieth century, attended Carlisle. It was at this school that Thorpe's athletic skills were discovered.

Many tribes in Oklahoma established their own boarding schools to ensure that their children would be educated but also learn about tribal sovereignty. The Cherokee government established a public school system in 1841 and operated eighteen public schools by 1843. In 1844 the Chickasaw tribal government appropriated funds for a tribal academy, which was opened seven years later as the Chickasaw Manual Labor School for Boys. Between 1852 and 1859 the Chickasaw opened four more boarding schools. The Choctaw Nation, whose educational system became the model for schools in the Creek, Chickasaw, and Seminole nations, had twelve tribally funded schools in operation by 1838. 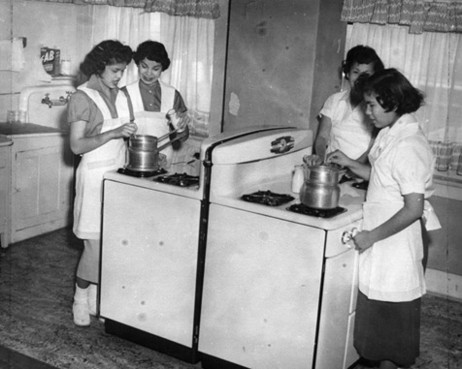 When it came to treaties with American Indian tribes, the US government broke its promises over and over again. This made many tribes unhappy with their treatment by whites. It also led to many American Indians escaping from their reservations. Many wanted the freedom to travel and hunt as they pleased like they had done in the past and began to escape together from their assigned lands. When Indians would leave their reservations or were suspected of housing warrior bands, often the US Army was sent to find them. This led to many conflicts and battles in Indian Territory.

On November 27, 1868, peace chief Black Kettle and his Cheyenne and Arapaho followers were attacked in their sleep by Lieutenant Colonel George A. Custer and his Seventh Cavalry near the Washita River. The US Army suspected Black Kettle and his people were housing a warrior band that had been raiding white settlers and stealing their goods. The great peace chief Black Kettle was shot and killed while trying to mount his horse. The total number of Cheyenne and Arapaho casualties is unknown. General Custer lost twenty-seven men at the Battle of the Washita. The surviving women and children of the camp were taken hostage while their homes and possessions were burned. The 800 horses found at Black Kettle's camp were shot and killed as well. 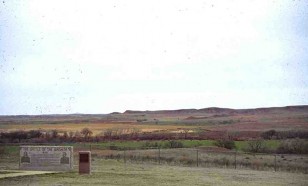 By 1874, not much had changed for the American Indians tribes in Oklahoma. Although many had settled onto their reservations, some refused to live on their assigned lands because of the mistreatment by the US government and the lack of supplies and rations. Conditions on Indian Territory reservations during this time were very bad, filled with disease and little food or resources to survive. Some Plains Indians, including the Comanche and Kiowa, had members that raided and hunted for their own resources off the reservations. When white hunters began killing off their much needed buffalo, many American Indians became even more desperate for food. This upset the US Army and eventually led to the Red River War of 1874–1875. In the end, the US Army won. By the end of the Red River War, the buffalo was almost completely wiped out on the plains, and more white settlers entered current-day Texas and Oklahoma.

Fort Reno had its origins as a temporary camp in July 1874 to protect the Cheyenne-Arapaho Agency at Darlington following an Indian outbreak that led to the Red River War of 1874. Located three miles west and two miles north of present El Reno in Canadian County, the original military camp was enlarged and officially created as Fort Reno on July 15, 1875. It took its name from General Jesse L. Reno, who had been killed at South Mountain, Maryland, during the Civil War.

Fort Reno was assigned to exercise military control over the Southern Cheyenne and Southern Arapaho Reservation. It stretched westward between the North Canadian and Washita watersheds to the Texas Panhandle. The post and the Darlington Agency fostered the first trappings of white settlement in what is now central Oklahoma.

In January 1869 General Philip Sheridan began building a permanent base in Indian Territory, known as Fort Sill. It was named after Brigadier General Joshua Sill, a West Point classmate of Sheridan's who was killed at the battle of Stones River, Tennessee. Fort Sill has long been known as the home of the US Army's Field Artillery. In the nineteenth century, the soldiers of Fort Sill served as peacekeepers, police of the Oklahoma Land Run of 1889, and protection for settlers and American Indians, including Apache chief Geronimo. Today it is home to the US Army Field Artillery Training Center. 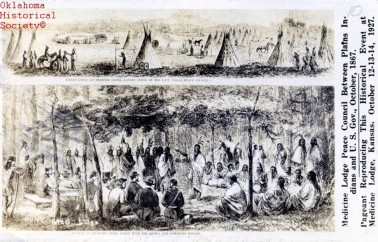 A rendition of the October 1867 Medicine Lodge Peace Council between Plains Indians and the US government. A year later in November of 1868, this peace treaty would be broken at the Battle of the Washita (19589.68.45, Alvin Rucker Collection, OHS). 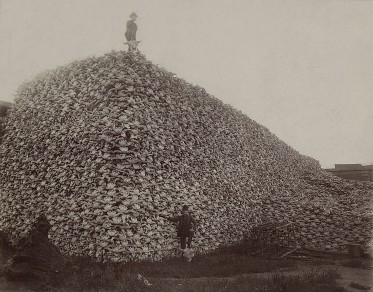 A pile of American bison, or buffalo, skulls in 1870 leading up to the Red River War (photograph courtesy of the Smithsonian).