American Indians in the Twentieth Century

American Indians faced much heartache in the twentieth century, including assimilation and racism, but continued to persevere. Despite mistreatment by the US government, American Indians served in both World Wars, built up tribal communities, and reclaimed their sovereignty by joining together across tribal lines. 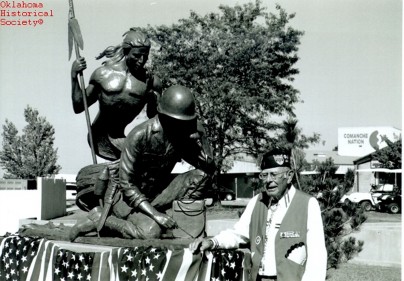 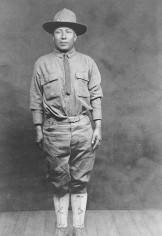 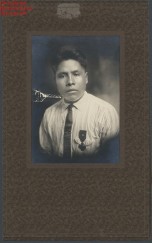 Around 10,000 American Indians served their country during World War I. The most decorated of these was Joseph Oklahombi.

Joseph Oklahombi was a fifteen-year-old soldier in World War I and a member of the Choctaw Nation. He served in Company D, 141st Regiment, 1st Battalion, 1st Brigade, 36th Division. He, along with his other tribal members, used their native language to send messages throughout the 71st Brigade so that German intelligence could not understand what they were saying. They later were called Code Talkers. Not only was Joseph Oklahombi a Code Talker, he also fought with his fellow soldiers and has been identified by some as "Oklahoma's Greatest Hero." He is the recipient of a Silver Star and the French Croix de Guerre. He came back to Oklahoma after the war and was struck by a truck and killed in 1960.

American Indians served as "Code Talkers" in World War I, World War II, the Korean War, and the Vietnam War. The first Code Talkers were a group of Choctaws in the 141st, 142rd, and 143rd Infantry Regiments of the 36th Infantry Division in World War I. During the Meuse-Argonne campaign of 1918 in France, Germans broke Allied communication codes, monitored radio and telephone lines, and captured one of every four runners between companies. Needing a more secure means of communication, an American army officer overheard some Choctaw soldiers conversing in their native language. The most famous Code Talkers are likely the Navajo Code talkers who served during World War II. The Navajo language is the only military code that has never been cracked by the enemy.

The attack on Pearl Harbor in 1941 encouraged many American Indians to enlist. Oklahoma American Indians, many of whom were already members of National Guard units, filled a noticeable portion of the ranks of the US Army's famed 45th Division. It is estimated that around 44,000 served during the war. Like World War I, many American Indians who served in the Second World War were also honored for their heroism. Ernest Childers, a Muscogee Creek, and Jack Montgomery, a Cherokee, received Medals of Honor. They were the only American Indians to be awarded the nation's highest military honor in World War II. 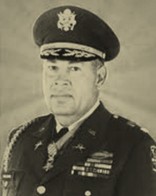 Clarence Tinker was the first American Indian in the history of the United States Army to attain the rank of major general. He was one-eighth Osage and was born in the Osage Nation, Indian Territory, in 1887. He was given command of the Hawaii Department following the attack on Pearl Harbor in 1941 and in 1942 was promoted to major general. Clarence Tinker led four bombing attacks on Wake Island on June 5, 1942; upon leaving Midway Island on June 6, his plane crashed at sea, killing all on board. Tinker Air Force Base in Midwest City is named after him.

Red Power and the Rise of a New Age 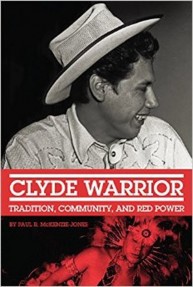 The opportunities for higher education, jobs, and travel that came with World War II became an important moment for the newest generation of American Indians in the 1960s and 1970s. Many were inspired by the African American civil rights movement and decided to fight for their people's sovereignty and an end to racism. According to Standing Rock Sioux historian and American Indian leader Vine Deloria Jr., Red Power is a uniquely American Indian idea that puts human beings before money and goods. The Red Power movement was also used to contradict the media's portrayals of American Indians as "noble savages," a stereotype that was often used to depict American Indians as less modern or ignorant.

Clyde Warrior was born in Ponca City, Oklahoma, and raised by his traditional Ponca grandparents. While attending Northeastern State University in Tahlequah in 1966, Warrior began organizing the National Indian Youth Council (NIYC). The NIYC was the first student-led Indian activism group and became famous for their 1964 "fish-ins" in Washington State that demanded local tribes be given back their fishing rights. Clyde Warrior was important to the Red Power movement across the nation and has been called the "prophet of Red Power." 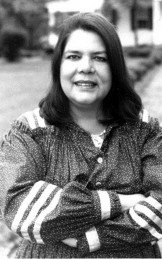 Wilma Mankiller, born on November 18, 1945, in Tahlequah, was highly inspired by the Red Power movement and the idea of bettering her tribe through unity.

Mankiller became the first female Principal Chief of the Cherokee Nation in 1985. Though up against the male-dominated world of the Cherokee Nation when she became principal chief, she managed to create a sense of community within the nation and assisted in providing the help it needed to become self-sufficient. She also authored many books, including Mankiller: A Chief and Her People.