American Indians and the Arts

American Indians have a long and rich relationship with the arts. From petroglyphs and paintings, weaving and pottery making, and symbolic clothing and bead work, American Indians have created some of the most beautiful works of art from pre-European contact through the twenty-first century. 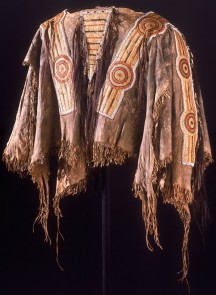 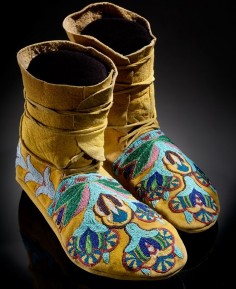 Although George Catlin was not of American Indian descent, he was the first artist to paint American Indians and display his work to a widespread audience. Traveling from Fort Gibson to the Wichita Mountains in 1832, Catlin painted many portraits of the Osage, Kiowa, and Comanche people he met. George Catlin traveled around the United States and later parts of Europe with his American Indian art shows. His paintings were the first real glimpse of American Indian life for many Americans at the time. Most of George Catlin's works are housed at the Smithsonian, but the American Museum of Natural History and Oklahoma's own Gilcrease Museum in Tulsa display many of his portraits as well. 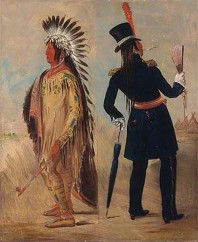 Pigeon's Egg Head (The Light) Going to and Returning from Washington, 1837–39 (image courtesy of the Smithsonian). 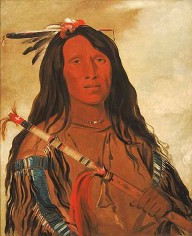 Né-hee-ó-ee-wóo-tis, Wolf on the Hill, Chief of the Tribe, 1832 Cheyenne/Suhtai (image courtesy of the Smithsonian).

The Kiowa Six were some of the first professionally trained American Indian artists. Under the direction of Oscar Jacobson at the University of Oklahoma in 1927, the Kiowa Six became internationally known for their talent and portrayals of American Indian traditions. The six members were Lois Bougetah Smoky, James Auchiah, Jack Hokeah, Spencer Asah, Stephen Mopope, and Monroe Tsatoke. Lois Smoky was the only female member of the group and the first American Indian woman in Oklahoma to paint the human figure, as it was against tradition for females to practice this style of art. The most famous works by the Kiowa Six are the murals in the Wiley Post Building, which is now the Oklahoma Judicial Center. The murals were painted by Monroe Tsatoke and Spencer Asah and are thought to be inspired by George Catlin's works. All of the Kiowa Six were born and raised in Oklahoma. 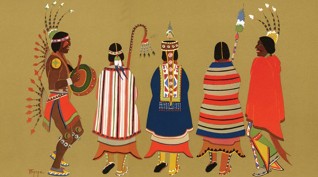 A member of the Chickasaw Nation, Te Ata (or Mary Frances Thompson) was best known for her American Indian storytelling, a career that spanned sixty years. She was born in Emet, Chickasaw Nation, Indian Territory, in 1895 near Tishomingo. Te Ata performed at the first state dinner given by Franklin Roosevelt in 1933 and wrote a children's book, Baby Rattlesnake. 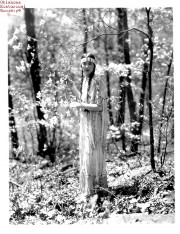 Allan Houser is one of the most famous American Indian artists. Born in 1914 near Fort Sill to Apache parents, Houser would go on to attend the Painting School at the Santa Fe Indian School. Although a fairly successful painter, Houser quit art professionally for some time in order to make more money for his family. He eventually returned to the art world, but this time as a modernist sculptor and an art professor. His many sculptures of American Indian life are world-renowned. His last monumental bronze sculpture, Unconquered, sits in front of the Oklahoma History Center. Houser's work As Long As the Waters Flow is on display outside of the Oklahoma State Capitol. 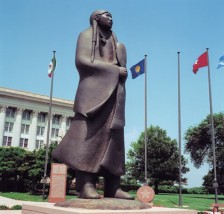 As Long As the Waters Flow by Allan Houser (image courtesy of the Oklahoma Arts Council). 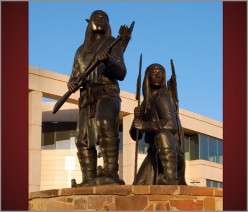 Maria and Marjorie Tallchief, Rosella Hightower, Moscelyne Larkin, and Yvonne Chouteau were the first American Indian professionally trained ballet dancers. They are renowned for combining the artistic skills and traditions of their ancestors with modern dance. 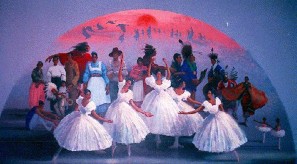 All five were honored with the title prima ballerina and with a mural at the Oklahoma State Capitol titled Flight of Spirit. All five were born in Oklahoma (image courtesy of The Daily Oklahoman).