In 1974 Sonic began redesigning its outward image, changing its logo and paper products to a more graphic and modern look. In 1975 a Sonic Advertising Trust was formed to produce television and radio commercials and catchy songs that could be used to promote all of the restaurants. The first Sonic television commercial aired on July 11, 1976. The trust moved towards developing new slogans and marketing strategies. The slogan “Sonic– America’s Favorite Drive-In” was added to commercials in 1977. At the same time, Sonic released many different types of commemorative items, such as glasses, posters, and cards with the company’s logo as well as advertisements for companies like Disney, Dr. Pepper, and Coca-Cola. Sonic found its big chance in establishing a brand with the rise of nostalgia for the 1950s. The images of carhops, burgers and shakes, and drive-ins were directly connected to the 1950s, and with the popularity of films like Grease in the late 1970s, these images drew consumers to Sonic.

The ’50s image continued through the 1980s when Sonic signed Frankie Avalon, a popular movie star, singer, and teen idol from the late 1950s and early 1960s, to star in their commercials. The name of the advertising campaign at the time was “Sonic–Where the ’50s Reach the Future.” Under the leadership of longtime President and Chairman of the Board Cliff Hudson, the brand would honor that promise as it moved into the 1990s, with a major redesign of the Sonic logo in 1996 to the modern yellow, blue, and red logo, a reconstruction of the menu format, and set kits for uniforms and publicity across the nation. In 1997 the Wacky Pack kid’s meal was created, with a rotating selection of collectible toys. From 2000 to 2003, Sonic would sponsor a NASCAR car. In 2004 comedians T.J. Jagodowski and Peter Grosz became nationally famous from their popular series of “Two Guys” television ads for Sonic. They still perform in many Sonic commercials, but Sonic has embraced a twenty-first century style of advertising as well, promoting deals and specials through Twitter, Facebook, and Instagram accounts. No matter the decade, Sonic always finds a way to connect to their audience. 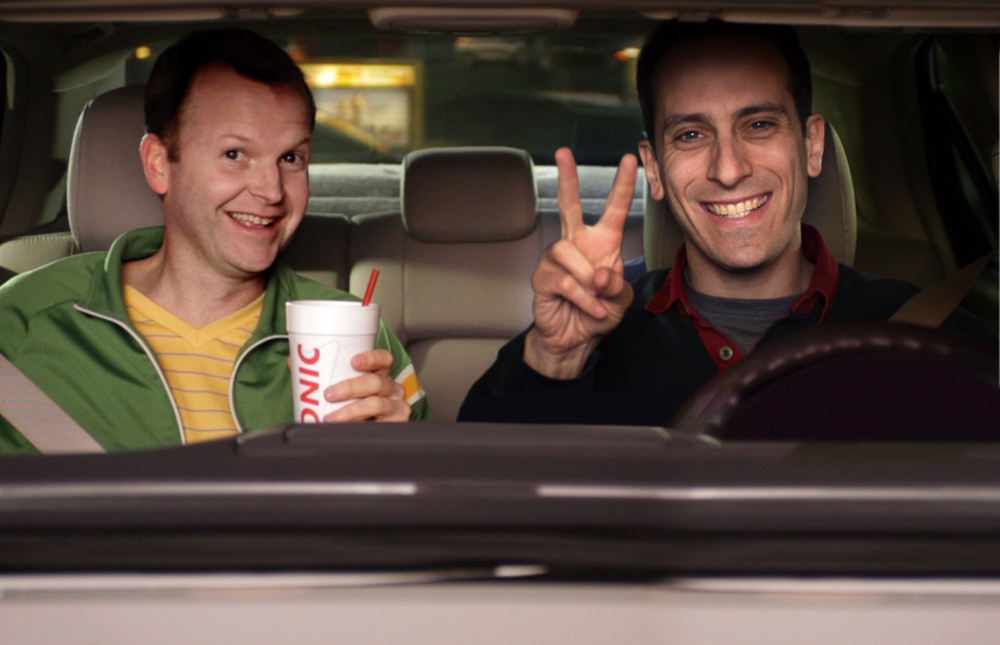