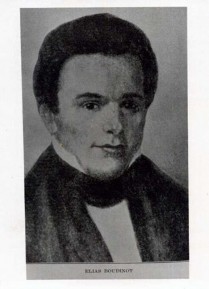 Elias Boudinot was born under the name Galagina Oowatie in Georgia in 1803. He was educated at missionary schools, and during his education took the English name Elias Boudinot. After he finished his schooling, he became the editor of the Cherokee Phoenix newspaper. The newspaper had national circulation and often discussed the Cherokee Nation's efforts to resist removal from their homes in Georgia. Boudinot's uncle was Major Ridge, the leader of the removal party of the Cherokee Nation. The removal party included Cherokee citizens that felt resisting removal was a useless effort, and that the nation should sign a treaty soon to get the best deal they could for their land. Elias, his uncle, his cousin, John Ridge, and Stand Watie signed the Treaty of New Echota in 1835. This was the removal treaty used by Presidents Andrew Jackson and Martin Van Buren to force the Cherokee to move west, even though most Cherokee citizens opposed the treaty.

Elias Boudinot moved west to Park Hill in present-day eastern Oklahoma and resettled his family. When the rest of the Cherokee Nation arrived in 1839, many blamed the removal party members for the hardships and deaths endured on the journey west. Major Ridge, John Ridge, and Elias Boudinot were assassinated for signing the Treaty of New Echota in 1839. 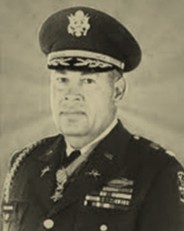 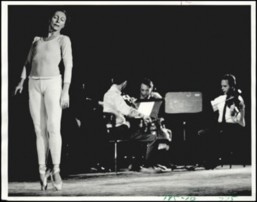 Rosella Hightower was a member of the first five American Indian prima ballerinas and the Choctaw Nation. She performed all over the world with her fellow American Indian ballerinas: Maria Tallchief, Marjorie Tallchief, Moscelyne Larkin, and Myra Yvonne Chouteau. Their pictures are in the rotunda of the state capitol. 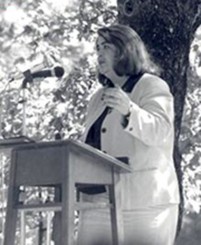 Wilma Mankiller, a former chief of the Cherokee Nation, was a brave leader and the first woman to be named chief. She grew up in a big family who eventually moved to California. She came back to Oklahoma and began to help her people with everyday needs. Her work with the tribe before she served as chief earned her the Medal of Freedom, the highest honor given to a Cherokee citizen. She died in 2010. 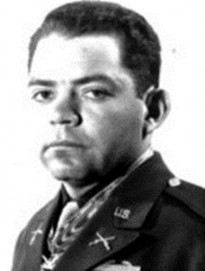 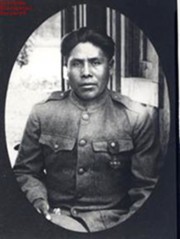 Joseph Oklahombi was a fifteen-year-old soldier in World War I and a member of the Choctaw Nation. He served in Company D, 141st Regiment, 1st Battalion, 1st Brigade, 36th Division. He, along with his other tribal members, used their native language to send messages throughout the 71st brigade so that German intelligence could not understand what they were saying. They later were called code talkers. Not only was he a code talker, he also fought with his fellow soldiers and has been identified by some as "Oklahoma's Greatest Hero." He is the recipient of a Silver Star and the French Croix de Guerre. He came back to Oklahoma after the war and was struck by a truck and killed in 1960. 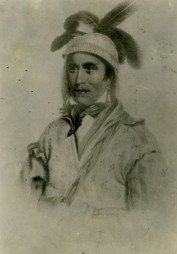 Opothleyahola was a prominent chief of the Muscogee (Creek) Nation. Born in Alabama in 1780, Opothleyahola belonged to the Upper Creek faction of the Muscogee (Creek) Nation. The Upper Creek were those members of the Creek Nation that held closest to their traditional way of life, while the Lower Creek more readily adopted the lifestyles of those non-Indians living near them. The Upper Creek also strongly opposed removal to west of the Mississippi, while the Lower Creek felt that removal was inevitable and accepted removal sooner.

Opothleyahola and many Upper Creek held on to their lands in Alabama as long as they could but eventually signed the Treaty of March 1832. This treaty exchanged the Muscogee (Creek) lands in Alabama for lands in Indian Territory where the Upper and Lower Creek would clash again during the American Civil War. 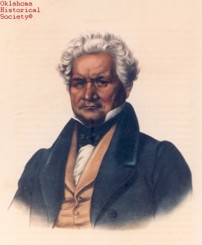 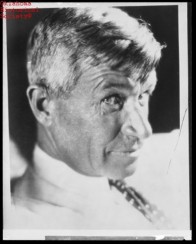 Cherokee citizen and comedian, Will Rogers, from Claremore, Oklahoma, learned how to be a cowboy on his father's ranch. He would eventually join a Wild West Show, entertaining the crowd by doing rope tricks and riding a horse. Once motion pictures became popular, he moved to Hollywood and began acting in western movies. While acting, he began to write a newspaper column on the current news all the while ensuring he made people laugh. 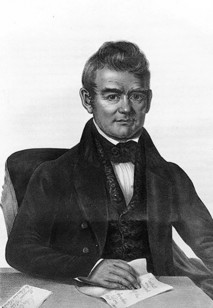 John Ross was the principal chief of the Cherokee Nation for nearly forty years. He was born in 1790 to a Scots-Irish father and Cherokee mother. He was raised speaking both Cherokee and English. During the War of 1812, he served as an adjutant in a unit under General Andrew Jackson's command. Ross rose to prominence as a political leader amongst the Cherokee after the war due to his education and ability to speak both English and Cherokee.

Ross proved himself to be an effective negotiator and diplomat, rebuffing many attempts to force the Cherokee to cede their lands to the United States. This led to his assumption of the role of Principal Chief in 1828, a position he held until his death. The next ten years of his life were spent in conflict with President Jackson over the policy of Indian Removal.

John Ross headed west with his people in 1838. One quarter of those that left in 1838 perished on the Trail of Tears, including Ross's wife. He continued to lead his people through the Civil War, but perished in Washington, DC, in 1866 during negotiations over the Reconstruction Treaties of 1866. He is buried on a family plot in Tahlequah, Oklahoma.

Sequoyah was a Cherokee citizen best known for the creation of the Cherokee syllabary. He was born sometime in the 1770s in Tennessee. He served with the Cherokee Company, like John Ross, at the Battle of Horseshoe Bend. In 1819, he moved to Alabama with his wife and daughter.

Sequoyah had noticed how much of an advantage a written language provided English speakers, so he decided to create something similar for Cherokee. What he created was not an alphabet, like in English, but a syllabary. An alphabet has a few symbols or letters where each symbol can be used to make more than one sound. In a syllabary, each symbol makes exactly one sound, so the Cherokee Syllabary has eighty-five symbols. This also means that the Cherokee written language is 100 percent phonetic, which makes it much easier to learn than English.

To prove the usefulness of the syllabary to the National Council, Sequoyah taught his daughter, Ahyokah, how to read it. Ahyokah and Sequoyah wrote messages to each other from separate rooms and read them aloud to the Council members. The Council approved the use of the syllabary and by 1826 the Cherokee Nation published the Cherokee Phoenix, a bilingual newspaper written in English and Cherokee, for a national audience.

In 1829, Sequoyah moved to Indian Territory near present-day Sallisaw, Oklahoma. Sequoyah died in 1842 while traveling through Mexico. His cabin still stands near Sallisaw and is owned by the Cherokee Nation. 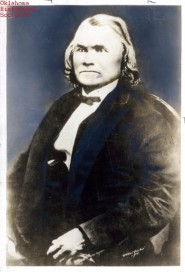 Stand Watie (also known as De-ga-ta-ga, or "he stands") was the only American Indian to earn the rank brigadier general during the Civil War. As a Cherokee leader of the mixed-blood treaty party along with his brother, Elias Boudinot, and his uncle, Major John Ridge, he signed the Treaty of New Echota in 1835 that led to the removal of the Cherokee from Georgia to Indian Territory. Stand Watie was a successful businessman and plantation owner until the outbreak of the Civil War in 1861. Despite Principal Chief of the Cherokee Nation John Ross's wavering, Stand Watie formed an alliance with the Confederacy and commanded the First Regiment of Cherokee Mounted Volunteers. Stand Watie was a great leader in the Confederacy despite its lack of resources and manpower in Indian Territory. He is credited with the capture of the Union steamboat J. R. Williams and the Confederate victory at the Second Battle of Cabin Creek. In May 1864 Watie was promoted to brigadier general, and in February 1865 he became the commander of the Indian Division. Watie surrendered on June 23, 1865, as the last Confederate general standing. 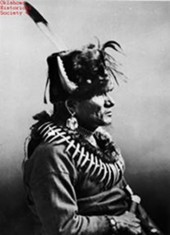 Born in 1829, Standing Bear was a chief in the Ponca Nation. Shortly after the Ponca people were removed to Indian Territory, in 1877, Standing Bear's son died. Standing Bear wished to bury his son in his homeland of Nebraska, so he and a group of other tribal members left the territory and traveled there. They were captured and incarcerated by the US government in Omaha, Nebraska, for leaving Indian Territory. Standing Bear was interviewed by a newspaper, which drew attention to his story and brought volunteer lawyers to his aide. A federal judge determined that the United States govern- ment could not confine the Poncas to a reservation. This decision allowed any Indian to come and go from their reservation at will. Standing Bear's story also captured the attention of Henry Dawes, who would write the legislation for the Dawes Act. 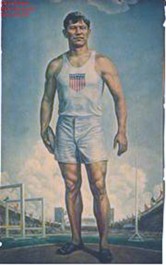 Jim Thorpe, of the Sac and Fox tribe, was one of the earliest champions of the Olympics and is recognized as the greatest athlete of the first half of the twentieth century. Born on his mother's allotment in Pottawatomie County in 1887, Thorpe had a troubled childhood after his mother and twin brother passed away. After transferring from an Indian School in Oklahoma to the Carlisle Indian Industrial School in Carlisle, Pennsylvania, Thorpe realized he enjoyed football and excelled at track and field. While in high school he broke many athletic records and won a place on the United States Olympic team. Jim Thorpe won two gold medals at the 1912 Olympics which would later be revoked but then reinstated. They were removed by the International Olympic Committee because he was a professional athlete. This rule was unevenly enforced. He would later play professional football and baseball and become the first president of the NFL. 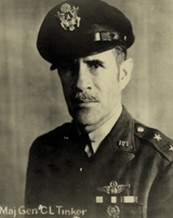 Clarence Tinker was the first American Indian in the history of the United States Army to attain the rank of major general. He was one-eighth Osage and was born in the Osage Nation in Indian Territory in 1887. He was given command of the Hawaii Department following the attack on Pearl Harbor in 1941 and in 1942 was promoted to major general. Clarence Tinker led four bombing attacks on Wake Island on June 5, 1942; upon leaving Midway Island on June 6, his plane crashed at sea, killing all on board. Tinker Air Force Base in Midwest City is named after him. Clyde Warrior was born in Ponca City, Oklahoma, and raised by his traditional Ponca grandparents. While attending Northeastern State University in Tahlequah in 1966, Warrior began organizing the National Indian Youth Council. The NIYC was the first student-led Indian activism group and became famous for their 1964 "fish-ins" in Washington State that demanded local tribes be given back their fishing rights. Clyde Warrior was important to the Red Power movement across the nation and has been called the "prophet of Red Power."