Home |   Learn |  Indian Removal and the Trail of Tears

Indian Removal and the Trail of Tears

Without enough supplies, many American Indians died on these trips, which were often more than a thousand miles long. Many died from disease and exposure to harsh weather on the trip as well. Once in Indian Territory the US government left the tribes without enough supplies, leading to more deaths. This information is important to know because it changed American Indian culture and their relationship with the United States government forever. 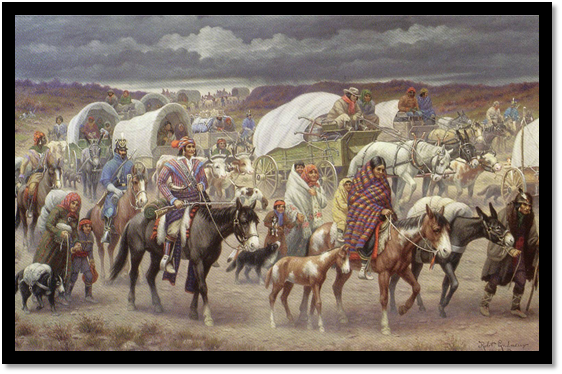 Following the purchase of the Louisiana Territory from France, there was a growing movement to remove American Indians residing in United States territory east of the Mississippi River to lands west of the Mississippi River. Many Americans held the flawed belief that American Indians did not make good use of the land they possessed, and American settlers could better develop it. This belief led to conflict and eventually invasion of Indian lands by white settlers, which was multiplied by the discovery of gold in Indian lands in Georgia.

Many presidents tried to convince American Indian nations to move West in exchange for land or money. President Thomas Jefferson promised to remove all American Indian residents from Georgia in 1802 but was not able to go through with his plan. President James Madison renewed some talks with tribes in Georgia, Mississippi, and Alabama following the War of 1812 but did not follow through. In the 1820s, it was President James Monroe who first put forth the idea to exchange land in the east for land west of the Mississippi River, but his negotiations were as equally unsuccessful as his predecessors.

The issue came to a head under the presidency of Andrew Jackson. President Jackson was strongly anti-American Indian rights and refused to recognize the sovereignty of Indian nations. He felt that it was wrong to allow American Indians to possess and control lands which he felt belonged to American citizens. He also did not like the idea of independent nations existing within the borders of the United States. Indian removal as an official policy was first put forth in President Jackson's second annual address to Congress in 1830. The Indian Removal Act of 1830 was written that same year, passed, and signed by President Jackson in December.

The Trail of Tears

The Indian Removal Act called for the relocation of all American Indian tribes residing east of the Mississippi to lands in the West. The tribes were forced to negotiate and sign relocation treaties and could voluntarily move or be forced to move at gunpoint by the US Army. The Removal Act created conflict among the Five Tribes. Some members felt that they should accept the inevitable move West, while most wanted to fight removal as long as they could.

Major Ridge and his supporters, however, signed the Treaty of New Echota with President Jackson in 1835. They exchanged all Cherokee lands east of the Mississippi for land in Indian Territory, $5 million, and one year's worth of rations and supplies. The president ignored the Supreme Court and upheld the Treaty of New Echota. In 1838, President Martin Van Buren sent troops to forcibly remove the remaining Cherokee. The Cherokee citizens were held in disease-ridden camps and forced to march with little food, water, or good winter clothes. One in four Cherokee citizens died on the march known today as the Cherokee Trail of Tears.

The stories of the other four tribes are very similar, and by 1838 the United States Army ensured most of the tribes had moved to Indian Territory. One exception was the Seminole Nation. The Seminole armed themselves and fought the Second Seminole War from 1838 to 1842. Some of the tribe was captured and forced to move to Indian Territory, while others continued to fight until the US Army gave up. Today, the Seminole Tribe of Florida refers to themselves as the "Unconquered People," for this reason. 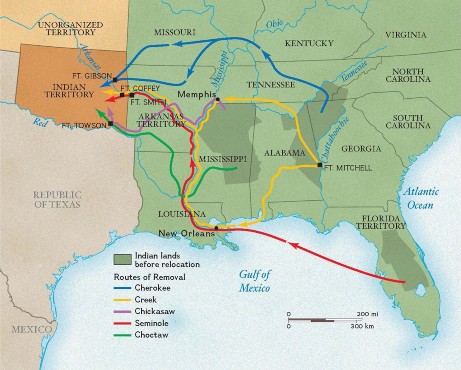 This map shows the route each of the Five Tribes took from their homelands to Indian Territory. These routes are known as the Trail of Tears because of the high number of deaths on the marches (map courtesy of National Geographic).