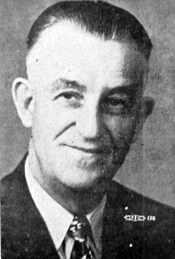 Paige Belcher
(image courtesy of the U.S. House of Representatives).

Oklahoma's lone Republican in Congress during much of the 1950s and 1960s, Page Henry Belcher was born in Jefferson, Oklahoma Territory, on April 21, 1899, on the claim his father took in the opening of the Cherokee Strip. He attended high school in Jefferson and Medford and studied at Friends University, Wichita, Kansas, and at the University of Oklahoma, lettering in football, basketball, baseball, and track. He later received an honorary LL.D. from Oklahoma City University. He served in the military during World War I.

From 1934 to 1938 Belcher was court clerk of Garfield County. In 1936 he was admitted to the bar and began to practice law in Enid, in 1938 becoming a municipal judge. He was also a member of Enid Board of Education. He became active in Republican Party politics, serving as a delegate to the Republican national conventions beginning in 1936 and becoming executive secretary of the Oklahoma Republican Party. In 1941–42 he served as secretary to U.S. Rep. Ross Rizley. While advancing his career, Belcher and his wife Gladys had a son, Page, Jr., and a daughter, Carol.

In the 1950 election Belcher won Oklahoma's Eighth District seat in the U.S. House of Representatives, and in 1952 he gained the First District seat. He served in the House from January 3, 1951, to January 3, 1973. Because the district was one of the few Republican strongholds in Oklahoma at that time, the congressman easily won reelection, except in 1958 when some constituents reacted against the Eisenhower administration's agriculture policy. Because of redistricting, Belcher moved from Enid to Tulsa in 1967 in order to remain a resident of the First District.

During his first term in the House Belcher was appointed to the Agriculture Committee, on which he served throughout his congressional career. He eventually became the ranking minority member of the committee and its Wheat Subcommittee. While in Congress, he worked for the development of the Arkansas River Navigation System.

In June 1972 Belcher announced that he would retire at the end of the congressional session, because his age and health prevented him from meeting the demands and pressures of congressional business. He returned to Oklahoma and resided in Midwest City. He died on August 2, 1980, and was buried in Enid's Memorial Park Cemetery.

The following (as per The Chicago Manual of Style, 17th edition) is the preferred citation for articles:
Todd J. Kosmerick, “Belcher, Page Henry,” The Encyclopedia of Oklahoma History and Culture, https://www.okhistory.org/publications/enc/entry.php?entry=BE011.