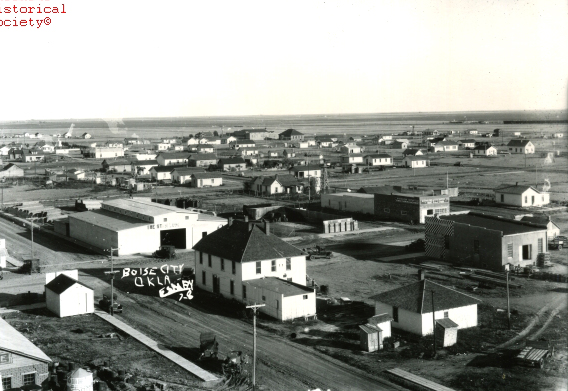 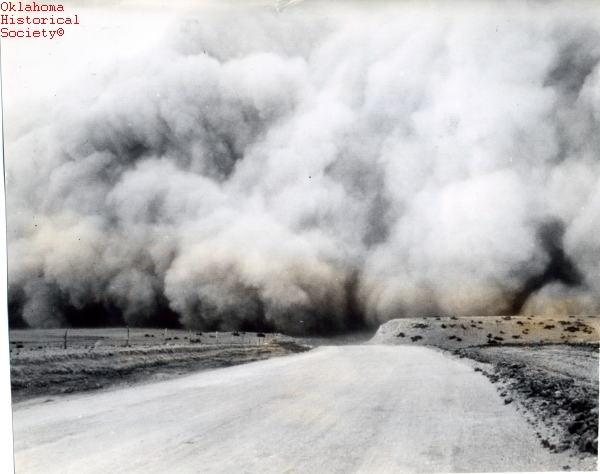 Boise City, the county seat of Cimarron County, is centrally located in the county at the convergence of U.S. Highways 287, 385, 412, 64, 56, and State Highways 3 and 325. In 1908 the Southwestern Immigration and Development Company of Guthrie, Oklahoma, composed of J. E. Stanley, A. J. Kline, and W. T. Douglas, established the town. They chose the approximate geographical center of the county, hoping it would stand the best chance of being selected as the county seat.

The men platted the town and sold about three thousand lots. Most went to buyers in Illinois, Indiana, Missouri, and other distant states where the prospective purchasers were less likely to tour the area and discover the fabrications in the circulated brochures. The advertisements showed rivers, paved streets, numerous trees, dozens of houses and businesses, and several sidewalks. Actually the Beaver River (dry most of the time) was located about four miles south of the town and the Cimarron was ten miles to the north, the area had no paving, a windmill stood in the center of the townsite (where the courthouse was built in 1928), there was one concrete-block building just southwest of the windmill, and one half-block long concrete sidewalk on the north side of the block east of the windmill. There were no trees and very few houses. The men also claimed that three railroads were coming through Boise City (the Santa Fe came in 1925), and that "King Corn and King Cotton grow side by side, yielding in excess of forty-five bushels of corn and a bale of cotton per acre." In the years since 1907 statehood there have been many good corn crops, as well as wheat, milo, and broomcorn, but it is doubtful that the county has ever produced more than one bale of cotton.

In addition to the false publicity, the promoters had no clear title to the land they sold. The men were arrested in September 1909 under a federal indictment charging them with fraudulent use of the mails. The company literature, according to postal authorities, "grossly misrepresented the natural resources of Boise City and Cimarron County." It was claimed that the defendants made $75,000. They were found guilty, and Stanley and Kline were sentenced to two years in the penitentiary, and Douglas, who was critically ill with tuberculosis, was given a sentence of one year and a day. He died before going to prison.

There have been a few faint clues as to how Boise City got its name. It might have been for a Captain Boise (spelling uncertain), who was a Civil War hero; for Boise, Idaho, with a change in pronunciation; or it may have come from the Boice Cattle Company (with a change of spelling), which, although located in Kansas, ran cattle in the area. In 1912 the town population approximately registered 325 residents and boasted a general store, telephone company, a drugstore, a tinsmith, a blacksmith, a barbershop, a hotel, a feed yard, a grocer, a livery, and two newspapers, the Boise City Tribune and the Cimarron News. The News continues to report into the twenty-first century. In 1925 the Atchison, Topeka and Santa Fe Railway built through the community, increasing residents and revenues. On July 20, 1925, residents voted to incorporate. In 1930 the population stood at 1,256, which steadily rose to 1,902 in 1950, and then leveled for many years until it dropped to 1,761 in 1980. Ranching, farming, and oil/natural gas production drive the local economy. In 2000 the U.S. Census reported 1,483 residents, and in 2010, 1,266.

In 1943 a B-17 bomber dropped six practice bombs on Boise City. These one-hundred-pound dummy bombs did not injure anybody but did damage a garage, sidewalk, and church. The plane flew from Dalhart Army Air Base, fifty miles south of Boise City, and mistook the town square's lights for its target. The town claims to be one of the few continental U.S. communities bombed during World War II.

The following (as per The Chicago Manual of Style, 17th edition) is the preferred citation for articles:
Norma Gene Young, “Boise City,” The Encyclopedia of Oklahoma History and Culture, https://www.okhistory.org/publications/enc/entry.php?entry=BO005.