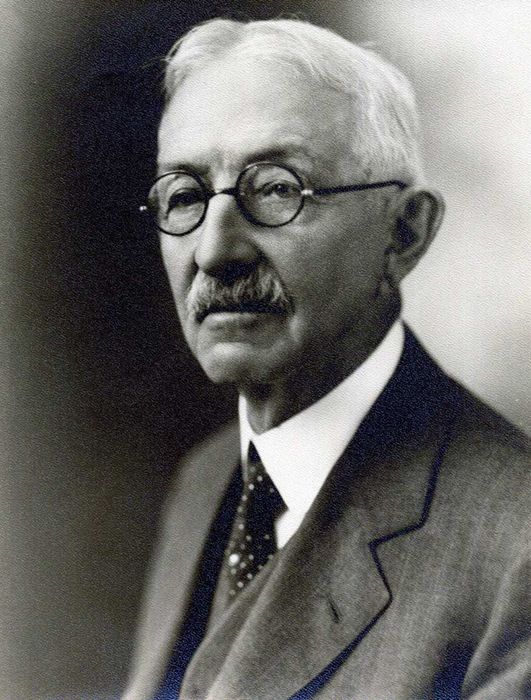 Appointed by Territorial Gov. Abraham J. Seay, David Ross Boyd was the first president of the University of Oklahoma, serving from 1892 until 1908. His sixteen-year tenure covered the entire territorial period of the university's history. Boyd, an Ohio native, was born on July 31, 1853, to James and Mary A. Ross Boyd. Interested in learning and education, David Boyd began teaching school at age fifteen. He graduated from the College of Wooster (Ohio) with a bachelor's degree in 1878 and a master's degree in 1881. An honorary degree of doctor of philosophy was awarded from this institution in 1898. From 1880 to 1888 Boyd was superintendent of the Van Wert, Ohio, schools.

While superintendent of schools in Arkansas City, Kansas, he was offered and accepted the University of Oklahoma presidency on July 6, 1892. Arriving at Norman, Oklahoma Territory, Boyd began plans to build a school and develop a faculty. He started with four: William N. Rice, French S. E. Amos, Edwin C. DeBarr, and himself. Tuition-free classes for territorial residents were held in a rented facility known as the "Rock Building." Other buildings were eventually erected at the new university during his presidency, and he took great pride in the campus, as evidenced by his tree-planting campaigns and building projects. He saw the enrollment of his school grow to 790 by the school year 1907–08. Varied extracurricular opportunities were realized during the Boyd years, including a literary society, glee club, drama club, school newspaper, and university sports. Unfortunately, he fell victim to political opposition by Gov. Charles N. Haskell. Boyd was subsequently dismissed in 1908 and was replaced by Arthur Grant Evans.

Boyd's other achievements included membership in the Territorial Board of Education and presidency of the Oklahoma Teachers' Association. He supported the creation of a new historical society as the caretaker for territorial records. He was married to Jennie Thompson of Coshocton, Ohio, and they had one daughter, Alice.

In 1930, by recommendation of Pres. William B. Bizzell, the regents conferred the title president emeritus upon Boyd. In 1945 the board of regents established the David Ross Boyd Professorship in his honor. Boyd was president of the University of New Mexico from 1912 to 1919. He died on November 17, 1936, in Pasadena, California.

The following (as per The Chicago Manual of Style, 17th edition) is the preferred citation for articles:
Kitty Pittman, “Boyd, David Ross,” The Encyclopedia of Oklahoma History and Culture, https://www.okhistory.org/publications/enc/entry.php?entry=BO030.