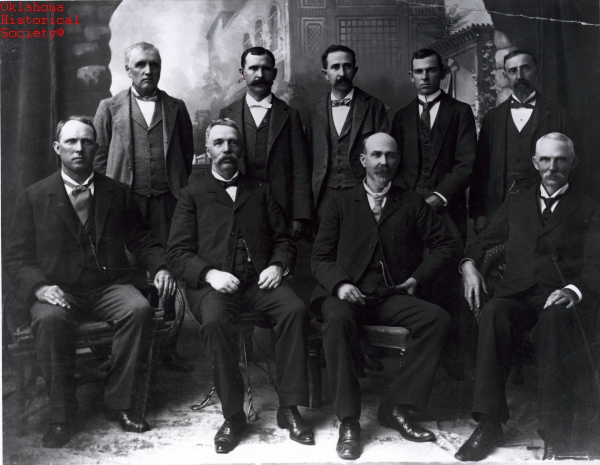 A political force who helped open Indian Territory for non-Indian settlement, Sidney Clarke influenced both state and national government. Born on October 16, 1831, in Southbridge, Massachusetts, to a family of abolitionists, Clarke worked in the newspaper industry before he moved to Kansas to promote the antislavery cause. In 1861 Kansas citizens elected him to the first state legislature. He also traveled to Washington, D.C., as Sen. James B. Lane's secretary. During the Civil War Clarke attained the rank of assistant provost marshal general for Kansas, Nebraska, Colorado, and Dakota. In 1864 he was elected to the U.S. House of Representatives, serving as Kansas's only House member. The state reelected him in 1866 and 1868. In 1865, as a member of a congressional committee, he escorted Pres. Abraham Lincoln's body to Springfield, Illinois, for burial.

As chairman of the House of Representatives Committee on Indian Affairs, Clarke headed investigations on treaties. One such agreement, made with the Osage in Kansas, benefited the railroads rather than the tribe or the non-Indian settlers, who were clamoring for the land. Reportedly, this stymied his Kansas political career, and after he lost the backing of Republican funders, he did not receive the party's nomination in 1870 as its congressional candidate. In 1878 he ran as an independent, and he won a seat in the Kansas House of Representatives and was named speaker of the house. Clarke soon joined David Payne and William Couch in the efforts to open the Unassigned Lands of present central Oklahoma to settlement. He served the "boomers" as a lobbyist in Washington and in 1889 assisted in drafting the Indian Appropriation Bill that accomplished their goal of settling Oklahoma Territory. He was a partner in the Seminole Townsite Investment Company and settled in Oklahoma City after the Land Run of 1889.

In Oklahoma Territory Clarke was quickly elected to the Oklahoma City Council and later served as the second provisional mayor, after Couch resigned the position. Clarke served on the Territorial Legislature in 1898 and 1900 and chaired the statehood committee. He again lobbied in Washington, pressuring Congress to admit Oklahoma as a state. He initially sought a combined state made of Oklahoma and Indian Territory, but by the beginning of the twentieth century Clarke supported statehood for Oklahoma Territory alone, with Indian Territory possibly added to it at a future date. He helped push through congressional legislation that donated federal military land to Oklahoma City, gave rights-of-way to the St. Louis and Oklahoma City Railway, and allowed Oklahoma Territory to acquire the Cherokee Strip after its opening.

Clarke served on the Oklahoma Historical Society's board of directors from 1896 until 1906. For a brief time in 1903 and early 1904 he served as the society's custodian. On June 18, 1909, Sidney Clark died in Oklahoma City. His papers are housed at the Carl Albert Center Congressional Archives at the University of Oklahoma.

Alvin Rucker, "The Good We Do: The Story of Sidney Clarke," Daily Oklahoman (Oklahoma City), 2 June 1929.

The following (as per The Chicago Manual of Style, 17th edition) is the preferred citation for articles:
Larry O'Dell, “Clarke, Sidney,” The Encyclopedia of Oklahoma History and Culture, https://www.okhistory.org/publications/enc/entry.php?entry=CL005.