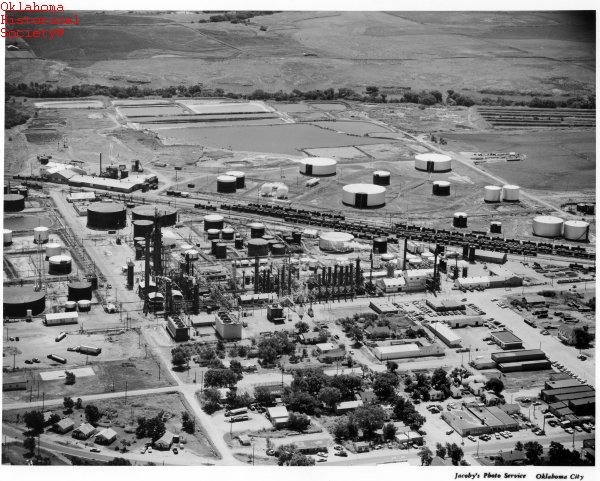 Cyril is located in the southeastern corner of Caddo County, fourteen miles south of Anadarko, twenty-five miles southwest of Chickasha, and about twenty-five miles northeast of Lawton. The town is situated at the junction of U.S. Highway 277 and State Highways 8 and 19. Originally built on eighty acres of the allotment of the infant daughter of Bayard Lookingglass, a Comanche, the town of Cyril was platted in late 1906 by E. S. Pearson, C. A. Nunnelley, Dr. M. H. Eden, and A. A. Hiatt. The townsite opened to settlement in 1907.

The surrounding agricultural community provided a basis for Cyril's economy in the early years. Important crops included corn, hay, melons, cattle, hogs, and broomcorn. The town was located on the Oklahoma City and Western Railroad line (after 1907 a branch of the St. Louis and San Francisco Railway) line between Oklahoma City and Lawton. In 1918 an oil refinery was constructed in the community to handle the output of the nearby Cement Field. Operated by the Anderson-Pritchard Refinery Company from 1922 until the late 1970s, the facility quickly became Cyril's economic mainstay. Purchased by the Oklahoma Refinery Company in the late 1970s, the refinery continued in operation only until about 1987. Despite numerous plans to bring it back into service, the plant remained in disuse until its demolition in 2004. Because it had the refinery, Cyril is one of thirteen industrial sites in Oklahoma named as an Environmental Protection Agency Superfund site. The town was put on the list in 1990, and at the end of the twentieth century cleanup activities were ongoing.

There have been several newspapers in the community with the Cyril News still serving the town at the end of the twentieth century. Other papers have included the Cyril Advocate, the Cyril Enterprise, the Cyril Pioneer, the Cyril Courier, the Caddo County News, and the Cyril Weekly News. The current form of city government is commission.

The following (as per The Chicago Manual of Style, 17th edition) is the preferred citation for articles:
Cynthia Savage, “Cyril,” The Encyclopedia of Oklahoma History and Culture, https://www.okhistory.org/publications/enc/entry.php?entry=CY001.