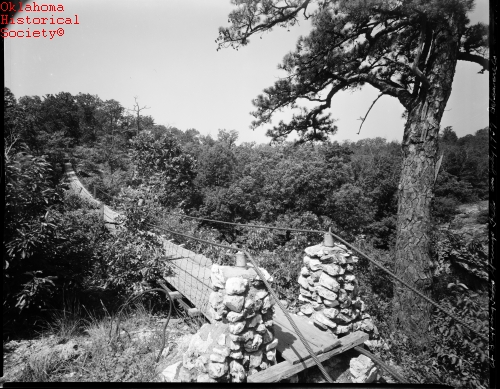 Located in northeastern Oklahoma, Delaware County is bordered on the east by McDonald County, Missouri, and Benton County, Arkansas, on the south by Adair and Cherokee counties, on the west by Mayes and Craig counties, and on the north by Ottawa County. U.S. Highway 59 crosses the region north and south. The Cherokee Turnpike, also U.S. Highway 412, crosses the southern end of Delaware County. Other important routes include State Highways 10, 20, 28, 85, 116, 125, and 127.

The county lies on the western slopes of the Ozark Plateau, an area of forests, prairies, and farmland. The Grand River and Elk River are the major watercourses in the county's northern portion, and Flint Creek and the Illinois River drain in the southern part. The Ozark limestone holds no oil or minerals but provides an abundant supply of water. The county's total land and water area is 792.33 square miles.

At least three different periods of prehistoric peoples have been documented in Delaware County. By 2004 twenty-three Archaic, seventeen Woodland, and sixty-three Eastern Villager archaeological sites had been tested. In 1939, before Grand Lake filled, University of Oklahoma archaeologists excavated along Grand River and Honey Creek, uncovering many artifacts. The sites, similar to the Hopewell Culture that resided in the Kansas City, Missouri area 2,000 to 1,400 years ago, are now under the lake. In more modern times, few American Indians lived in the present county until the federal government began relocating tribes.

Beginning in 1828 the Western Cherokee were relocated from Arkansas, settling mainly outside future Delaware County, in the southern part of the region that later became the Cherokee Nation. One of the chiefs, Thomas Chisholm (grandfather of Sen. Robert L. Owen), settled just west of Maysville, Arkansas. He was buried there in 1834 in the oldest-known marked grave in the county. In 1832 the Seneca from Ohio were removed to Indian Territory into lands that extended into present northeastern Delaware County. Some of the Eastern Cherokee arrived in 1836 and 1837, but the main body came late 1838 into 1839. About 1820 a group of Delaware who had befriended the Cherokee against the Osage settled Delaware Town, located approximately two miles south of present Eucha on Spavinaw Creek; that site now lies under Lake Eucha. The Cherokee named the surrounding area Delaware District.

Delaware County was created at statehood in November 1907. Cherokee John H. Gibson, mayor of Grove, swore in the first county judge and clerk. As the only incorporated town in the county at statehood, Grove was designated the seat of government. However, a movement soon emerged to relocate it. Those who it in the county's center banded together, found a place on Jay Washbourne's allotment, platted a town, won a vote to make Jay the county seat, and built a wooden courthouse. Meanwhile, an entrepreneur built a concrete courthouse just outside of the Jay plat. The wooden courthouse mysteriously burned, tempers flared, guns appeared, and the governor called out the military. A judge ruled in favor of the Jay plat, and in 1912 the records went into the Jay courthouse. Nevertheless, Grove citizens complained that poor roads and insufficient accommodations made it difficult to hold court at Jay.

At the turn of the twentieth century subsistence farming served as the principal occupation. Much changed in the century's first two decades. Better transportation, refrigerated railroad cars, new farm equipment, and agricultural education brought improvements. The value of dairy products rose from $127,389 in 1919 to $186,499 ten years later. Egg production increased from 390,006 dozen in 1919 to 636,835 in 1929. Over time, labor-intensive row crops and grains gave way to cattle. In 1920 the county had 2,176 farms with 257,671 acres. This held steady until the 1960s when the number began decreasing. In the 1970s poultry, mainly broilers, became a key product. In 1997 there were 1,303 farms covering 364,620 acres. The value of agricultural products sold that year was $94 million, approximately two-thirds of which were poultry products.

Three lakes changed the face and the economy of Delaware County. In 1924 the city of Tulsa, completed a water-supply dam at Spavinaw on Spavinaw Creek in Mayes County. Lake Spavinaw impounds water into Delaware County. Although small, the lake began to attract weekenders and day-trippers. In 1940 a dam on Grand River was completed, and Grand Lake O' the Cherokees was filled. Grand Lake sprawls north across Delaware County into Ottawa County. Creation of the lake also displaced hundreds of people, covered roads, and necessitated relocation of a number of cemeteries. Sailboat Bridge on Grand Lake is the second-longest bridge over water in Oklahoma.

Tulsa's growing need for water caused it to revisit Spavinaw Creek, and in 1952 an upstream dam was completed, creating Lake Eucha. It became a popular fishing and recreation area. The lake inundated the Cherokee town of Eucha, the home of Cherokee Chief Charles Thompson, or Oochalata, who was buried there. The town and the cemetery were relocated. The chief is buried just inside the gate of the new cemetery, the grave marked by a military stone for his Civil War service to the Union.

After World War II a boom began. Tourism and retirement became big business. In 1965 Green Country, Incorporated, formed to coordinate promotion and development of sixteen northeast Oklahoma counties. In 2000 the three largest occupation groups, each at 23.4 percent of the labor force, were management, professional, and related occupations; production, transportation and material moving occupations; and sales and office jobs. Service occupations involved 15.9 percent, and farming and related jobs involved only 1.8 percent.

Rail access assisted in community growth over the years. In 1896 Congress authorized the Arkansas Northwestern Railway to build a line from Southwest City, Missouri, northwest to the Kansas line between Baxter Springs and Chetopa. Under the name of the Arkansas and Oklahoma Railroad, a line was built from Rogers, Arkansas, to Grove, reaching there in 1900. The next year the St. Louis and San Francisco Railway bought the line, which never extended beyond Grove and was abandoned in 1940. In 1912–13 the Kansas, Oklahoma, and Gulf Railroad built tracks through the region to connect Kansas and Texas. Upon entering Delaware County, the line looped west and then southwest, following the west bank of Grand River and exiting into Craig County. In 1912 the town of Bernice was platted on both sides of the railroad near the crossing of Horse Creek. Many businesses in Needmore, two miles east, moved to Bernice. Further east, Rabbit, a small community north of Grove later renamed Copeland Switch, developed. When Grand Lake was built, Bernice relocated to higher ground on the west side of Horse Creek, and some of the railway grade was moved. The line was abandoned in 1966, and the railway grade, including the Horse Creek Bridge, became State Highway 85A.

In 1910 Delaware County had a population of 11,469; only five counties had fewer people. This did not change appreciably until 1970 when the population surged from 13,198 in 1960 to 17,767 in 1970, 23,946 in 1980, and 28,070 in 1990. The 2000 census recorded 37,077, more than fifty-nine other counties. In 2004 the census revealed that while rural counties were losing population, Delaware County was the fifth-fastest-growing in the state. In addition to tourism, a tight labor market, aggressive action to attract employers, and a growing economy in adjacent northwest Arkansas contributed to these changes.

Since the surge of whites into Indian Territory in the nineteenth century's last decades, they have outnumbered other groups. In 1900 the census of Indian Territory recorded whites at 77.2 percent and American Indians at 13.4. The 2010 census tallied whites at 67.0 percent, American Indians at 22.4 percent, Asians at 1.3 percent, and African Americans at 0.2 percent. Hispanic ethnicity was identified as 3.0 percent. The incorporated towns are Bernice, Colcord, Grove, Jay, Kansas, Oaks, and West Siloam.

Notable natives of Delaware County include Lee B. Smith (1844–1917), an adopted Cherokee who served on the Cherokee Nation Council and was the county's first state legislator. John H. Gibson (1861–1940) owned the Grove Sun and served in local and state offices.

The following (as per The Chicago Manual of Style, 17th edition) is the preferred citation for articles:
Rose Stauber, “Delaware County,” The Encyclopedia of Oklahoma History and Culture, https://www.okhistory.org/publications/enc/entry.php?entry=DE010.