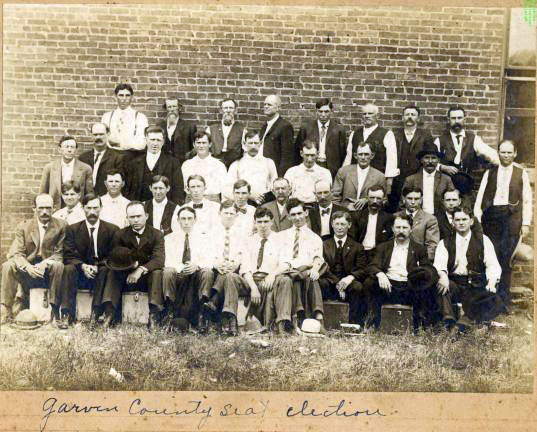 Delegates to the Constitutional Convention of 1906 formed Garvin County from a part of the former Recording District 17 in the Chickasaw Nation, Indian Territory. Located in south-central Oklahoma, the 813.66-square-mile county is bordered by McClain County to the north, Pontotoc County to the east, Murray and Carter counties to the south, and Stephens and Grady counties to the west. In 2010 the incorporated towns were Pauls Valley (the county seat), Elmore City, Erin Springs, Foster, Katie, Lindsay, Maysville, Paoli, Stratford, and Wynnewood.

Garvin County lies within the Red Bed Plains and Sandstone Hills physiographic regions. The Washita River, Rush Creek, and Wildhorse Creek flow southeast across rolling hills toward the Arbuckle Mountains in the south. Interstate 35 and State Highways 74, 76, and 18 run north and south through the county, and State Highways 7, 19, and 29 remain the principal east-west thoroughfares. At 1907 statehood the Atchison, Topeka and Santa Fe Railway connected Paoli, Pauls Valley, and Wynnewood along the eastern edge of the county, and an east-west line linked Pauls Valley with Lindsay. The Lindsay line was abandoned after 1978, but the north-south route remained in operation through 1990. Starting in 1999 the Heartland Flyer, an Amtrak passenger line from Oklahoma City to Fort Worth, Texas, stopped twice daily at Pauls Valley's restored Santa Fe depot.

The Wichita tribe lived in the region from A.D. 1250 to 1450. Artifacts recovered in the area reveal a culture that settled from a nomadic life to a village existence of farming and trading. A total of sixty-four such Plains Village (A.D. 1000 to 1500) sites have been identified in the county, along with nine Paleo-Indian (prior to 6000 B.C.), fifty-nine Archaic (6000 B.C. to A.D. 1), and seventeen Woodland (A.D. 1 to 1000) sites. While some American Indians abandoned the villages to move west in search of bison, others continued to live in the vicinity until the area became a part of the Choctaw and Chickasaw nations in 1832 and 1856, respectively.

A natural ford on the Washita River located two miles east of present Pauls Valley served as a crossing on the Washita River for a stage line that ran from Caddo to Fort Sill. Cherokee Town was established at the ford as a supply station and rest stop for the stage line and wagon trains. Confederate Gen. Albert Pike met with the Plains Indians at Cherokee Town in 1861 to enlist their support for the South during the Civil War. When the Atchison, Topeka and Santa Fe Railway came through in 1906, Cherokee Town merchants moved to Wynnewood and Pauls Valley, which were located on the rail line.

Garvin County took its name from Samuel J. Garvin, who moved to the Chickasaw Nation near Whitebead in 1870 and became a prominent cattleman, merchant, and banker. Citizens selected Pauls Valley as the county seat over Wynnewood and Elmore City on June 20, 1908. Named after Smith Paul, an early settler in the region, Pauls Valley served as the trade center for the fertile Washita River Valley, "a section," according to Paul, "where the bottom land was rich and the blue stem grass grew so high that a man on horseback was almost hidden in its foliage."

Other prominent settlers in the county included Lee McCrummen, a rancher and banker from Paoli, Lewis Lindsay, who donated the land for the town site of Lindsay, and his father-in-law, Frank Murray, who owned eight thousand acres of farmland stretching over five miles along the Washita River near Erin Springs. Maysville claimed Wiley Post as a resident before 1918 when he left to work in the oil fields. Earl and Charles Burford invented a "twist tie" machine to close bread wrappers in 1961 and built a corporation in Maysville that manufactured packaging and production machines for bakeries.

The population of the county remained stable throughout its history. In 1907, while the region was still a part of Oklahoma Territory, the number of people living there was 22,787. The population grew to 32,445 in 1920 but declined to 31,150 in 1940 and 28,290 in 1960, reaching a low of 24,874 in 1970. By the 1990 census the number of inhabitants stood at 26,605, and at the end of the twentieth century at 27,210. In 2010 Garvin County had a population of 27,576, of whom 81.5 percent were white, 7.8 percent American Indian, 2.6 percent African American, and 0.4 percent Asian. Hispanic ethnicity was identified at 6.2 percent. Farming, ranching, and oil production have provided the major economic activities in the county. In 1907 crops of alfalfa, broomcorn, cotton, onions, potatoes, and hay produced $2.5 million for the county. In the 1930s paper-shelled pecans, an important export, grew on one thousand acres dedicated to pecan groves. By 1961 the Lindsay area harvested more broomcorn than any other region in the world, and "We Sweep the World" became the county slogan.

Oil-field services from discovery to production to delivery constituted the petroleum industry in Garvin County. Production developed from the 1920s when oil was discovered in the Robberson Field in the southwestern part of the county, and newer discoveries across the area created drilling, production, and refining jobs. The Golden Trend pool extended from Lindsay in the northwestern part of the county to Elmore City in the southern section, and geologists discovered gas reserves throughout the county. In 1991 Garvin County wells produced 5,602,413 barrels of oil and 56,715,111 million cubic feet (mcf) of natural gas.

Garvin County has several interesting historic sites. These include the Murray-Lindsay Mansion in Erin Springs (listed in the National Register of Historic Places, NR 70000534), the Washita Valley and Santa Fe Depot museums in Pauls Valley, Elmore City's restored Main Street, the Eskridge Hotel (NR 79001994) in Wynnewood, and a restored bank and museum in Stratford. The Initial Point (NR 70000533), from which all of Oklahoma, except for the Panhandle, was surveyed), is situated on the boundary of Garvin and Murray counties. Recreational activities have included golf courses at Lindsay and Pauls Valley, and area lakes have provided fishing and boating opportunities.

The following (as per The Chicago Manual of Style, 17th edition) is the preferred citation for articles:
D. Keith Lough, “Garvin County,” The Encyclopedia of Oklahoma History and Culture, https://www.okhistory.org/publications/enc/entry.php?entry=GA017.