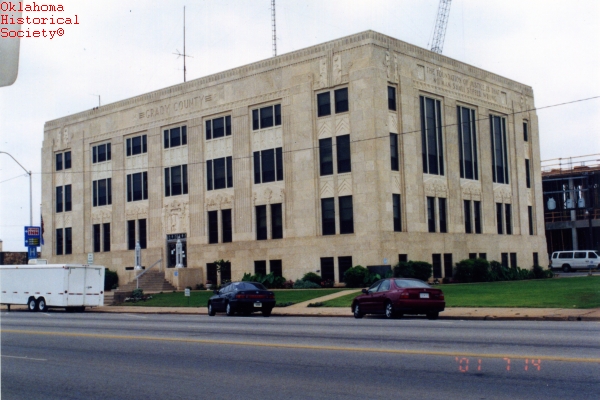 Located in south-central Oklahoma, Grady County incorporates 1,105.30 square miles of land and water. The name honored Henry W. Grady, an editor of the Atlanta Constitution and a prominent southern orator. Judge S. W. Hayes, representative to the Oklahoma Constitutional Convention of 1906, selected the name as the county organized prior to statehood. Canadian County lies to Grady County's north, with McClain and Garvin to the east, Stephens to the south, and Caddo and Comanche to the west. In 1911 Grady County annexed Washington, Prairie Valley, and the northern section of Dutton townships in Caddo County. Chickasha serves as the county seat. In 2010 other incorporated towns included Alex, Amber, Bradley, Bridge Creek, Minco, Ninnekah, Norge, Pocasset, Rush Springs, Tuttle, and Verden.

The county mostly lies in the Red Bed Plains region, attributing to its rolling prairies. The western and southwestern portions consist of sandstone hills. The Canadian River provides its northern border and the Washita River runs through the county's middle. These rivers and their tributaries drain the county and contribute to its agricultural prosperity.

By 1981 eighty-five archaeological sites had been recorded in the county. Most of these focused on the Plains Village period, A. D. 1000 to 1500. In the eighteenth century Pierre and Paul Mallet, French Canadian brothers, traveled through the area, following the Canadian River to present New Mexico. Soon after the United States acquired the Louisiana Territory, containing present Oklahoma, from France in 1803, Americans began to traverse the region. These included the Long-Bell Expedition (1820), the Dodge-Leavenworth Expedition (1834), Josiah Gregg (1839–40), and Randolph B. Marcy (1849). In 1820 the Choctaw received title to the land in exchange for their property in the southeastern United States. In 1837 the Chickasaw joined them, and in 1855 a treaty separated the nations, with the Chickasaw acquiring an area that included present Grady County. The Chickasaw Nation's Pickens County contained most of future Grady County.

In 1849, when Randolph B. Marcy blazed the California Road, he noted a Wichita and a Waco village near present Rush Springs. In 1858 federal troops under Maj. Earl Van Dorn attacked a Comanche band at the site. The Comanche were in a peaceful conference with the Wichita, Choctaw, and Chickasaw. Nearby Fort Arbuckle had knowledge of the meeting, but Van Dorn failed to consult the garrison. Sixty Comanche and four Wichita died, and the rest of the Wichita fled to Fort Arbuckle, fearing a Comanche reprisal.

Other Plains Indians, including Comanche and Caddo, settled near present Verden, then called Cottonwood Grove. In 1865 at Cottonwood Grove, as the Civil War concluded, a compact between representatives of the Five Tribes and the Caddo, Delaware, Kiowa, Comanche,Apache, Cheyenne, Arapaho, and Osage was signed. This Camp Napoleon Compact declared peace between the nations and pledged that they would stand united against any unjust demands that the federal government made at the war's end. In 1931, through the efforts of Anna Lewis, the Oklahoma College for Women erected a historical marker commemorating the event.

Prior to the Civil War the major transportation routes were the California Road and a military road that connected Fort Smith to Boggy Depot. Afterward the Chisholm Trail, used by Texans to drive their cattle to the railroads and markets of Kansas, ran north-south through the present county. In the 1870s, on the trail south of the Canadian River, C. L. Campbell established a store that evolved into Silver City, and a post office was designated in 1883. Fred, another prominent trade site and stage stand, stood at the intersection of the Chisholm Trail and the road to Fort Sill. Fred received a post office in 1894.

In 1890 the Chicago, Kansas and Nebraska Railway (sold to the Chicago, Rock Island and Pacific Railway Company [CRI&P] in 1891) built tracks to Minco. Construction stalled there for two years, helping to bolster that city's population. Most Silver City residents relocated to Minco. In 1892 the CRI&P laid tracks to the Texas line, establishing Chickasha, Ninnekah, and Rush Springs. In 1900 the CRI&P built a line from Chickasha to Mangum. In 1901–02 the Oklahoma City and Western Railroad (sold to the St. Louis and San Francisco Railroad Company in 1907) constructed tracks from Oklahoma City to Chickasha, creating Tuttle and Amber. By 1903 the line was continued to the Red River. Also in 1903 the CRI&P laid tracks from Chickasha to Lindsay; that route was abandoned in 1942. In 1906 the Oklahoma Central Railway (sold to the Atchison, Topeka and Santa Fe Railway in 1914) built from Lehigh westward to near Chickasha, completing lines in and near that town in 1910. In 1942 these tracks were abandoned.

After the 1898 Curtis Act divested the Chickasaw Nation's government of its authority and the allotment process disposed of communal land, the federal government paved the way to statehood. The far western portion of Grady County was located in the Kiowa-Comanche-Apache and Wichita-Caddo reservations, which had been opened to non-Indian settlement in 1901. With 1907 statehood, the county organized, and Chickasha was named its seat.

Ranching has had a long and illustrious history in the Grady County area. William "Caddo Bill" Williams operated the late-nineteenth-century Half Moon Ranch near present Verden. The Campbells, Johnsons, and the Bonds, all related, were early residents of Silver City and Minco and operated several ranches, including the 7BC. Charles B. Campbell, the 7BC's owner and Williams's son-in-law, and E. B. Johnson, Montford Johnson's son, purchased the Half Moon Ranch around 1900. In 1907 county ranchers owned 37,864 head of cattle and milk cows, and by 1935, 56,414 head. The number of cattle continued to climb to an estimated 90,000 in 1963 and 110,000 in 2000. The latter figure was augmented by the Braum's Dairy between Minco and Tuttle. In 1975 Bill Braum located his main dairy in Grady County, keeping a herd of ten thousand Holstein cows. In 1987 he added a processing plant and a distribution center.

Beginning in the late 1910s oil and gas exploration occurred near the Grady-Stephens county line. The two early production zones were the Carter-Knox oil field and the Chickasha gas field. The first gas well in the Chickasha Field was drilled in 1922. In 1923 Marland Oil Company successfully drilled a gas well in the Carter-Knox Field, and that same year the Becker-Reed Oil and Gas Company struck oil. By 1975 the county produced 4,166,893 barrels of crude oil and 46,593,957 million cubic feet (mcf) of natural gas. In 2000 production registered 3,788,323 barrels of oil and 104,343,006 mcf of natural gas.

In 1908 the first state legislature founded the Oklahoma Industrial Institute and College for Girls, and the second legislature placed it in Chickasha. In 1916 the name officially changed to the Oklahoma College for Women. In 1965 renamed the Oklahoma College of Liberal Arts, it accepted full-time male students. In 1974 it became the University of Science and Arts of Oklahoma. Chickasha has been the county's leader in industry, dating to the turn of the twentieth century when it was one of Oklahoma's important shipping points for cattle and cotton. The 1931 Oklahoma Almanac reported that Chickasha had five banks as well as twenty factories, which employed 371 workers. During World War II the city had a pilot training school and a German prisoner of war camp. In the 1970s Chickasha continued to attract manufacturers, including a Delta Faucet factory. In 2000 the county had fourteen companies employing more than one hundred people.

Anna Lewis, "Trading Post at the Crossing of the Chickasaw Trails," The Chronicles of Oklahoma 12 (December 1934).

The following (as per The Chicago Manual of Style, 17th edition) is the preferred citation for articles:
Larry O'Dell, “Grady County,” The Encyclopedia of Oklahoma History and Culture, https://www.okhistory.org/publications/enc/entry.php?entry=GR002.