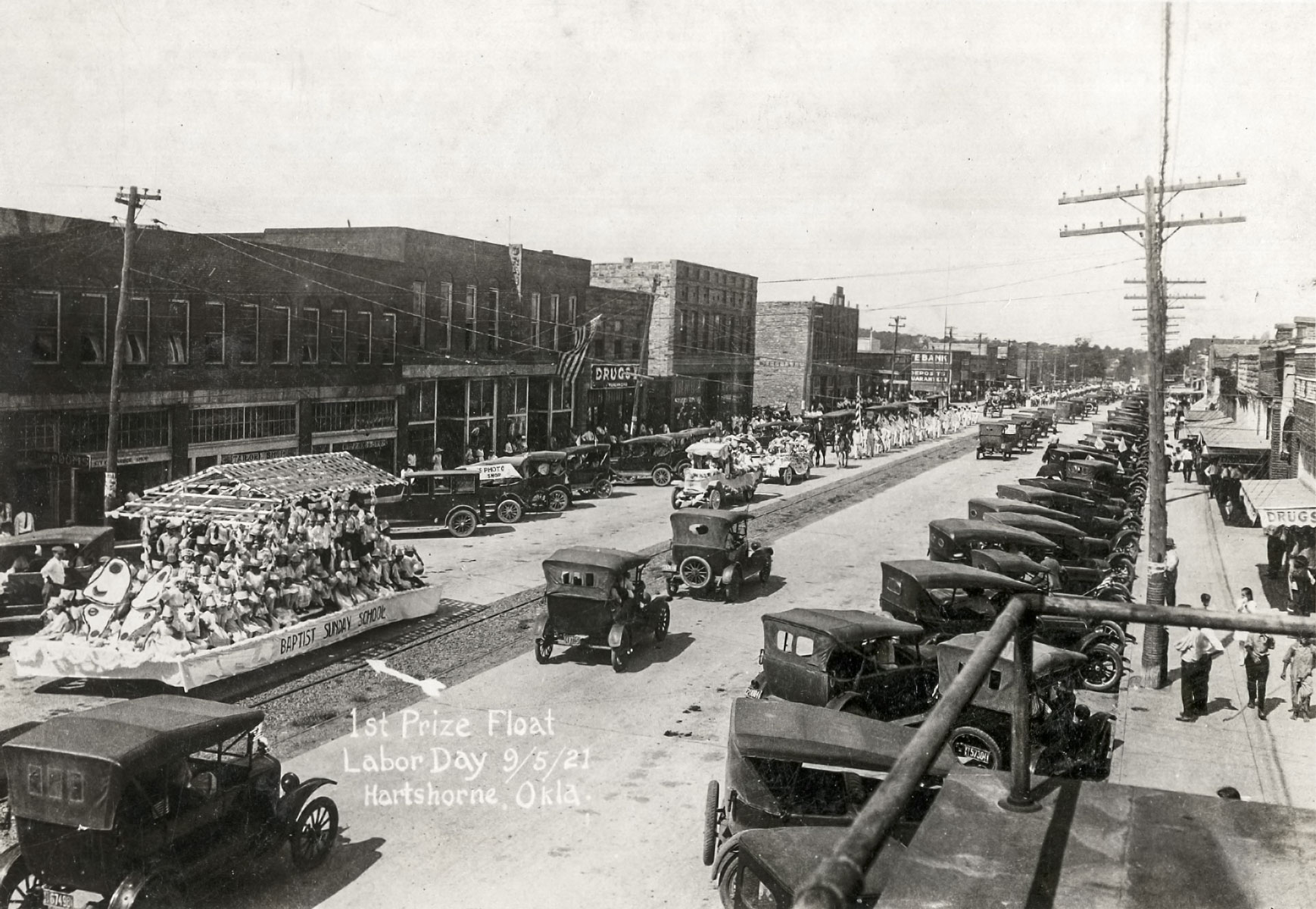 Hartshorne, in Pittsburg County, is located fifteen miles east of the county seat, McAlester, on U.S. Highway 270. As coal mines opened in the mid-nineteenth century, mine operators recruited immigrants from Italy, Ireland, Poland, Lithuania, and other countries to the area. A post office was opened on March 5, 1850. The town was incorporated by order of the U.S. District Court, Central District, Indian Territory, on March 1, 1900. The Choctaw Coal and Railway line, later acquired by the Choctaw, Oklahoma and Gulf Railroad, provided early transportation to the town. In 1902 the Chicago, Rock Island and Pacific Railway gained control of the line. In 1904 an electric interurban inaugurated a service from McAlester to Hartshorne.

The first school opened in a log house, and in 1897 the town built a four-room school. In 1909 Hartshorne upgraded to a three-story, brick school building, with full basement. The Phyllis Wheatley School existed as a separate (racially segregated, all-black) school until 1956 when the entire school system became integrated. In 1895 the Catholic Diocese of Oklahoma began building the Holy Rosary Church, a parochial school, rectory, and convent. Other major denominations represented in Hartshorne included the First Baptist, Methodist, First Christian, First Presbyterian, and Episcopal churches. One religious edifice that was built in 1917, the Saints Cyril and Methodius Russian Orthodox Church, remains a landmark. It replaced an earlier 1897 version that immigrants from Russia and other eastern European countries constructed.

Optimism and further development brought in four banks, an ice plant, saw mill, cotton gin, opera house, three hotels, and telephone service. The Hartshorne Sun reported the town's news from 1895 into the twenty-first century. The Critic, the News, and the Pittsburg County Republican are other short-lived newspapers that served the area. The population in 1900 stood at 2,352, and a business directory listed eighty businesses. A 1906 directory showed numerous fraternal halls, including Woodmen of the World, Knights of Pythias, two United Mine Workers of America locals, and Masonic lodges. In 1930 the population peaked at 3,587. As the mining industry began to decline, so did the population and business. In 1960 the census registered a low of 1,903, and in 1980 numbers increased to 2,380. The 2000 census reported 2,102 residents, and in 2010 the population stood at 2,125. The Cole Chapel School (NR 88001411) and New State School (NR 88001414), both Works Progress Administration (WPA) projects, are listed in the National Register of Historic Places. On July 4, 1904, the community organized a two-day celebration of Independence Day, creating a tradition that endures.

The following (as per The Chicago Manual of Style, 17th edition) is the preferred citation for articles:
Lorette Brown Payne, "Hartshorne," The Encyclopedia of Oklahoma History and Culture, https://www.okhistory.org/publications/enc/entry.php?entry=HA039.