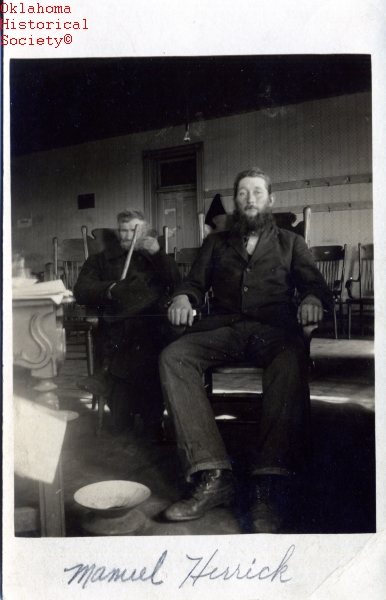 Born in Perry, Tuscarawas County, Ohio, on September 20, 1876, U.S. Rep. Manuel Herrick was the son of John and Belinda Kail Herrick. A simple-minded woman, Belinda Herrick believed that her son was Jesus Christ come to earth again and called him "Immanuel." The Herricks moved to Kansas in 1877 but returned to Ohio in 1892. That same year, the family went to Oklahoma Territory. In the summer of 1893 young Manuel attempted to rob a train and was subsequently found insane and sent to a mental institution. Upon release, he joined his parents on their claim near Perry, in the former Cherokee Outlet, and they farmed and raised cattle.

Largely self-educated, Herrick believed that he was Christ and became a preacher, although no church would accept him. The Herricks were so in awe of their son that they would walk several steps behind him. Shortly after 1907 statehood young Herrick began to run for a variety of public offices in Noble County. In 1918 he campaigned for a U.S. House seat as an independent but received only fifty-six votes. Since 1909 Oklahoma's Eighth District, a Republican stronghold, had been represented by Dick T. Morgan. During the filing period for the 1920 primary no Republicans other than Manuel Herrick filed against incumbent Morgan. On the last day of the filing period, however, Morgan died, leaving Herrick as the only Republican candidate. In the Republican landslide of 1920 Herrick easily won.

In the House Herrick served on several committees, including Alcoholic Liquor Traffic, Industrial Arts and Expositions, Irrigation of Arid Lands, and Election of President, Vice President, and Representatives in Congress. Perhaps one of his biggest assets in the nation's capital was his personal secretary, newspaperman Harry Gilstrap. A loyal employee, Gilstrap defended the congressman against an onslaught of ridicule. It was also obvious that Gilstrap wrote many of Herrick's speeches.

Herrick generally heeded the Republican Party line. He supported high tariffs, opposed the League of Nations, and advocated pensions for veterans. Called the "aerial daredevil of Congress," he was a staunch supporter of aviation and believed that an air defense was necessary for the country's future. Although he worked diligently for his constituents, his good work was overshadowed by his eccentricities and by his lack of knowledge of the governmental process. Shortly after he came to Washington, he introduced a bill to prohibit beauty contests, which he believed lured young women from home. To illustrate his point, he organized a beauty contest with the victor to win the hand in marriage of a wealthy man. Newspapers wrote scathing accounts of the event and questioned why Oklahoma voters ever chose such a man to represent them.

By 1952 he was nearly blind and in poor health. When a friend, George L. Welch, came to Quincy, the men made plans for Welch to move to the cabin. On January 11, 1952, they left Quincy during a blizzard, but neither reached the cabin. Herrick's body was found on February 29, 1952. His remains were cremated and the ashes interred in Quincy Cemetery.

The following (as per The Chicago Manual of Style, 17th edition) is the preferred citation for articles:
Carolyn G. Hanneman, “Herrick, Manuel,” The Encyclopedia of Oklahoma History and Culture, https://www.okhistory.org/publications/enc/entry?entry=HE018.