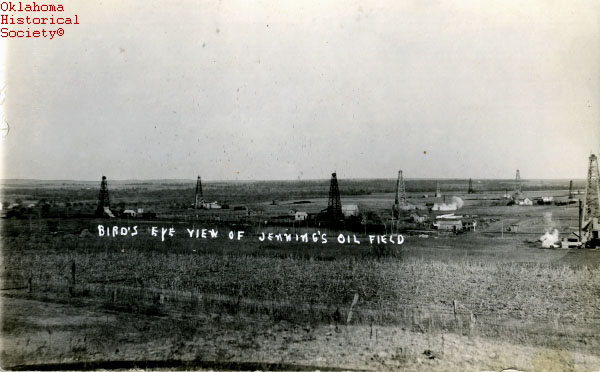 Located in south-central Pawnee County, the incorporated town of Jennings is situated on State Highway 99, three miles south of U.S. Highway 412 (Cimarron Turnpike). In Oklahoma Place Names, historian George H. Shirk asserts that the town was named in honor of townsite developer George Jennings. However, it is also believed that it was named for frontier lawyer turned outlaw Alphonzo "Al" Jennings, who donated forty acres for the 160-acre townsite. The community developed after the Cherokee Outlet Opening on September 16, 1893. A post office was established on November 14, 1893.

Following the land opening, merchants G. S. Van Eman, J. L. Bishop, Jesse C. Harper, and John A. Burkholder launched their businesses. On November 25, 1901, the Bank of Jennings opened, with C. C. Burkholder as president and J. A. Burkholder as vice president. Beginning in 1904 the town's agriculture-based economy was augmented when oil was discovered in the vicinity. In 1905 the town boasted of a "quiet and orderly" saloon, two broom factories, and ten stone buildings. By 1909 farmers supported a grain elevator and two cotton gins. In addition to cotton, farmers grew fruit, castor beans, sorghum, and other grains. Jennings also had two liveries, a blacksmith, and a machine shop. Three churches and the weekly Jennings News newspaper served the community. In 1918 four hotels offered lodging to oil-field workers as well as travelers. By the 1930s a cotton gin, a pipeline company, and eleven oil and gasoline plants operated. In the mid-1940s Jennings had several service/gasoline stations, a drug store, a hardware store, and a combination grocery and restaurant. By 1955 one service station and the hardware store had ceased to exist.

In 1903 the Arkansas Valley and Western Railway (later the St. Louis and San Francisco Railway) constructed a line from west Tulsa to Steen (northeast of Enid) that passed through the outskirts of town known as North Jennings. That same year the Missouri, Kansas and Oklahoma Railroad (later the Missouri, Kansas and Texas Railway) laid track from Agra (in present Lincoln County) to Osage (in present Osage County) connecting Jennings with outside markets. By 1909 outbound shipments included cattle, hogs, and cotton, and coal was shipped in from southeastern Oklahoma. In 1915 as the oil fields developed near Jennings, the Oil Belt Terminal Railway (later the Atchison, Topeka and Santa Fe Railway) connected Jennings to Oilton and Drumright to the south. Also, in 1915 the St. Louis and San Francisco Railway built a 1.7 mile line from North Jennings to Jennings, connecting its line with the Oil Belt Terminal Railway. During the Great Depression oil production declined, and the latter two lines were abandoned in 1933–34.

At 1907 statehood Jennings's population stood at 380. Numbers declined slightly to 361 in 1910, but peaked at 910 in 1920 during the oil boom. As the Great Depression progressed, the population dropped to 653 in 1930. People continued to move away during the next three decades, and the town reached its lowest census of 306 in 1960. The numbers rebounded to 395 in 1980. At the turn of the twenty-first century Jennings' 373 citizens supported a school serving prekindergarten through eighth grade. Of the employed residents, 90.5 percent commuted to work in Tulsa and Stillwater. The 2010 census reported a population of 363.

The following (as per The Chicago Manual of Style, 17th edition) is the preferred citation for articles:
Linda D. Wilson, “Jennings,” The Encyclopedia of Oklahoma History and Culture, https://www.okhistory.org/publications/enc/entry.php?entry=JE005.