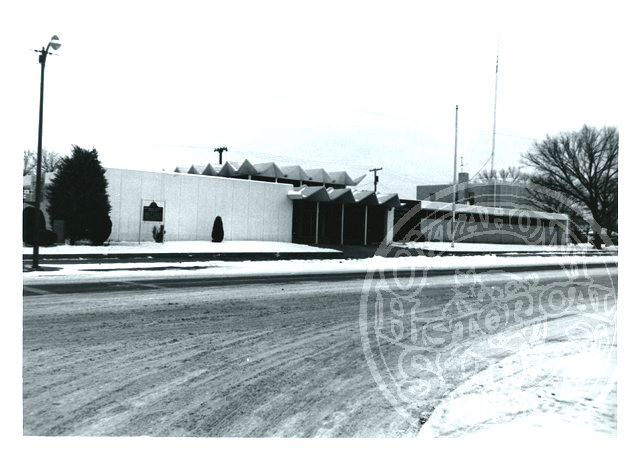 Bordered by Major and Garfield counties on the north, Logan on the east, Canadian on the south, and Blaine on the west, Kingfisher County is crossed by U.S. Highway 81 north-south and by State Highways 33/3 and 51 east-west. The Cimarron River slices diagonally through the county, entering near the northwest corner and exiting into Logan County at midboundary.

Kingfisher County's 906 square miles of land and water area lies in the Red Bed Plains of the Osage Plains physiographic region. The topography is characterized by low, rolling hills. Before the agricultural era began, prairie grasslands prevailed, and about one-sixth of the area was covered with oak timber. The breaks of the Cimarron River and its tributary creeks, including Turkey Creek from the north and Uncle John Creek and Kingfisher Creek from the south, are populated with cedar and some deciduous trees. Limited archaeological surveys revealed that precontact peoples, including Paleo-Indian and Archaic groups, may have used the area for foraging and hunting may have included Archaic (6000 B.C. to 1 A.D.) groups. The historic Osage, Cheyenne, and Comanche also accessed the broad prairies as they traveled in search of subsistence.

Transportation was important before and after the county's creation. The Chisholm Trail's meandering routes bisected the area north-south. A stage road paralleled the trail. Important stops were Baker Station, King Fisher Station, and Dover Station. Ranching, on land leased from the federal government, was the primary economy activity, but merchandise was sold at the stage stops and the Red Fork Ranch store, near present Dover. Rail access came about when the Chicago, Kansas and Nebraska Railway (owned by the Chicago, Rock Island and Pacific Railway) constructed its line from Kansas through the Cherokee Outlet, reaching Hennessey in September and Dover in October 1889. In 1900 a spur line was constructed eastward from Kingfisher to Cashion to Guthrie (abandoned in the 1930s).

The opening of the Unassigned Lands or Oklahoma District to non-Indian settlement on April 22, 1889, brought settlers to the region. Kingfisher town quickly grew up. Various explanations exist for the appellation "Kingfisher." It may have memorialized a rancher named David King Fisher, who operated north of town and gave his name to the creek; or nearby settlers King and Fisher may have been memorialized in a combined word. Or a rancher named John Fisher and his nephew, first name King, may be honored; in this version, Uncle John Creek is named for Fisher.

Created as a county in Oklahoma Territory in the Organic Act of May 2, 1890, the area originally consisted of sixteen full townships and two partial townships lying northeast of the Cimarron River and west of the 98th Meridian. The county's northern border was the south line of the Cherokee Outlet. Thus, the present boundaries include a strip approximately one-quarter mile deep in Township 20 North, Ranges 9 through 5 West. The county's area was increased pending the opening of the Cheyenne and Arapaho country in April 1892. Seven full townships and two partial townships (southwest of the Cimarron River and west of the 98th Meridian, as established by the 1858/1870 surveys) were added on the west, bringing the total area to 906 square miles. As specified in the Organic Act, the county was called County Five, the number reflecting the counties created from the Unassigned Lands, and Kingfisher City was named the county seat. Also as directed by the legislation, on August 5, 1890, during the first election for territorial representatives from County Five voters overwhelmingly selected "Kingfisher" as the county's name, over "Hennesey" and "Harrison."

Some new residents were natives of foreign lands. Germans and Germans from Russia who had earlier emigrated to the Midwest and to Kansas came to Kingfisher County to settle in the early 1890s. The Germans formed ethnic enclaves in Park and Harrison townships, in the south-central part of the county, and by 1910 they made up 5 percent of the residents. More than half were farmers, and another quarter owned businesses in Kingfisher, Hennessey, and Okarche. Most were Catholic or Lutheran. In 1890 Germans comprised 1 percent of the county's 8,332 population, and in 1900, 2 percent of 18,501. One German resident, Joseph Danne, developed a wheat variety called 'Early Triumph', which by 1954 produced more than half of America's wheat crop. A considerable number of Mennonites settled in the Hennessey vicinity. Germans from Russia (ethnically German but historically living on the Russian steppes) settled in Kingfisher County as well. The town of Loyal, originally Kiel, was one center for their population dispersed throughout Otter Township. Others settled in River, Omega, Kingfisher, and Logan townships.

By the time of 1907 statehood Kingfisher County registered 18,010 inhabitants in the census. Their primary occupations were farming, stock raising, and retail merchandising. There were five flour mills and ten grain elevators. Kingfisher was the seat of county government, whose officers leased the Central Hotel for their headquarters until a three-story, brick courthouse was constructed in 1892 by William Grimes and Abraham J. Seay.

Educational institutions were important to county residents. Kingfisher College existed at Kingfisher, and Lincoln College (for African Americans) operated at Dover in the early decades of the twentieth century. In addition to public high schools at Kingfisher and Hennessey and graded schools at Cashion, Kiel, and Dover, the county supported 116 school districts, most reflecting the location of a center of dispersed rural population or a settlement with a post office and store. At the end of the twentieth century six school districts operated. In addition, serving four All-Black towns and black farm families throughout the county were twenty separate (segregated) schools and a separate high school for black children. The African American population in 1910 totaled 2,392.

Oil prospecting in the mid-1920s brought additional prosperity and a new economic stimulus. The activity was most prevalent around Hennessey, Cashion, and Dover. Roxana, the county's only real "oil boom town," emerged in 1927 when oil was struck at the McCully Number One well. Roxana had approximately a thousand residents within a year but rapidly declined and became a ghost town. The Hennessey-Dover Field was ultimately determined to be within the Sooner Trend and in 1973 was one of the nation's top one hundred producers.

The following (as per The Chicago Manual of Style, 17th edition) is the preferred citation for articles:
Dianna Everett, “Kingfisher County,” The Encyclopedia of Oklahoma History and Culture, https://www.okhistory.org/publications/enc/entry?entry=KI012.