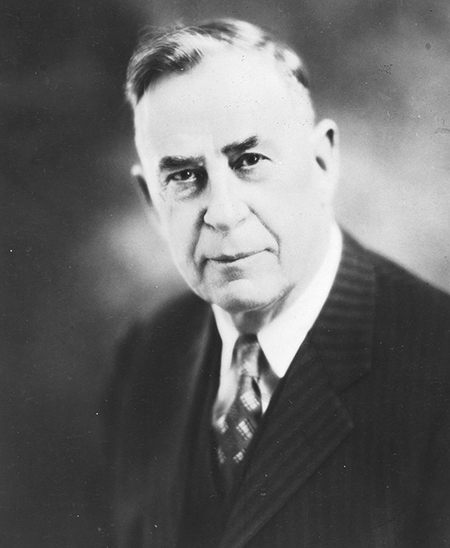 Domeless for nearly a century, Oklahoma's Capitol is the premier legacy of Solomon Andrew Layton, early-twentieth-century architect who richly influenced the state's built environment. Layton practiced architecture in Oklahoma for forty-one years, heading a firm from 1902 until his death in 1943.

The National Register of Historic Places lists twenty-two Layton-designed buildings, a statewide record unlikely to be broken. Important as the Capitol itself is the powerful influence of Layton's works, setting a standard of stability and design that continued sixty years after his death. His contribution to Oklahoma City's building heritage became evident in the 1995 bombing of the Alfred P. Murrah Federal Building. Eleven major downtown buildings that sustained damage yet remained structurally sound are designs of Layton and his partners. Seven of these are on the National Register.

His parents were Andrew and Jennette Miller Layton. Born in Lucas County, Iowa, on July 22, 1864, into a family of carpenters and builders, Solomon Layton learned their crafts as a boy. His architectural career began in Denver in 1887. He moved to El Reno in 1902 and soon afterward established a practice in Oklahoma City. With a succession of partners, including George Forsyth, S. Wemyss Smith, Jewell Hicks, and James W. Hawk, he produced well more than one hundred public, educational, and commercial buildings over the state and twelve or more homes, including his own (now razed) house at Northeast Thirteenth and Lincoln in Oklahoma City.

Layton and his partners, including S. Wemyss Smith, were so well established that by 1911 they successfully competed for the Oklahoma Capitol design contract. Work began in 1914. Layton intended the massive, neoclassical building to have a dome, but the state had no money. Almost a century later, in 2002 a dome was finally added, financed through private contributions.

His firm shaped the early character of Oklahoma City University and the University of Oklahoma (OU) campuses and of the Oklahoma Medical Center in Oklahoma City. Principal creations on the OU Norman campus include the administration building, the original law college, the Bizzell Memorial Library, and Memorial Stadium. At the Medical Center and Health Sciences Center campus the firm's Children's Hospital and medical college buildings are still in use.

Before 1929 Layton designed fourteen downtown multistory buildings in Oklahoma City, and more came later. On Main Street stood the Halliburton department store and the Patterson and Mercantile buildings. A block south of Main was the Baum Building, a replica of the Doge's Palace in Venice, Italy. A number of Layton designs survive in downtown Oklahoma City, including the Medical Arts Building, now 100 Park Avenue, and the former Skirvin and Skirvin Tower hotels, all showcases of early oil wealth.

Other Layton works remaining in the downtown Oklahoma City area include the Oklahoma County Courthouse, a classic Art Deco work, Central High School, restored as One Bell Central, the Oklahoman Building, now the YMCA, the Braniff and Petroleum towers, since incorporated into Kerr-McGee corporate headquarters, Oklahoma Gas and Electric Company's building, the Journal-Record Building, originally Shrine Temple and now part of the Oklahoma City Bombing Memorial, and the sixteen-story Southwestern Bell tower at 415 North Broadway. His work includes the MidContinent Building at Northwest Thirteenth and Classen Drive. In the Capitol Complex are the Governor's Mansion and the Wiley Post Building, original home of the Oklahoma Historical Society.

Also of historical significance nearly equal to that of the Capitol are the two Skirvins, occupying two corners of the intersection at Broadway and Northwest First (now Park Avenue). The original Skirvin Hotel, built as a hobby of oil multimillionaire William B. Skirvin, became the capital city hangout of his oil-baron friends. They liked to sit around the elegant lobby in their oil-stained boots and take their meals in the fine dining room. The Skirvin was also home to the Skirvin family, and the founder's daughter, Pearl, gave her first parties there. Pearl changed the spelling of her name at about the time she married Pittsburgh, Pennsylvania, steel magnate George Mesta, and she became famous as a Washington, D.C., hostess.

Solomon Layton married Alice Wood in 1885, and their union produced two daughters, Fern and Agnes. The state's premier architect died on February 6, 1943, in Oklahoma City and was laid to rest in Rose Hill Cemetery.

The following (as per The Chicago Manual of Style, 17th edition) is the preferred citation for articles:
Mary Jo Nelson, “Layton, Solomon Andrew,” The Encyclopedia of Oklahoma History and Culture, https://www.okhistory.org/publications/enc/entry.php?entry=LA036.