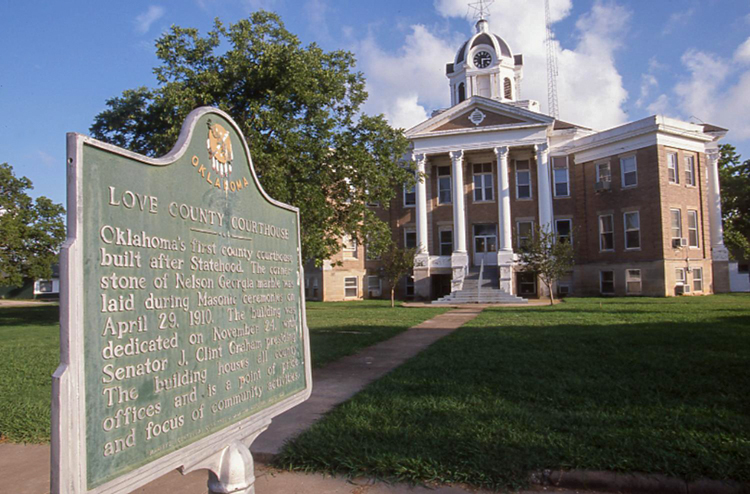 Established at 1907 statehood, Love County was originally known as Recording District Number 26, Pickens County, Chickasaw Nation, Indian Territory. Located in the southern part of Oklahoma it is bordered on the south by Texas and the Red River, on the north by Carter County, on the east by Marshall County, and on the west by Jefferson County. It is composed of 531.94 square miles of land and water with three incorporated towns: Marietta (the county seat), Leon (established 1883), and Thackerville (established 1882), and two unincorporated postal areas: Burneyville (post office established 1879) and Overbrook (post office established 1887).

Love County lies within the Red River Plains physiographic region. The topography is rolling to hilly, and the Red River and its tributaries drain the entire area. Principal tributaries are the Simon Creek, Hickory Creek, Walnut Bayou, and Mud Creek with the drainage being to the southeast. Early-day Love County teemed with wildlife including buffalo, elk, antelope, wild turkey, prairie chickens, wolves, coyotes, and bears. Lakes Murray and Texoma touch the northeastern and southern county boundaries, respectively.

At the turn of the twenty-first century archaeologists had identified twelve prehistoric sites. Two sites related to the Paleo era (prior to 6000 B.C.), five to the Archaic period (6000 B.C. to A.D. 1), two to the Woodland (A.D. 1 to 1000), and three to the Plains Village (A.D. 1000 to 1500). Representative of the Archaic era is the Pumpkin Creek site at which hunting groups found high quality stone for the fabrication of tools and spear points. Plains Indians would use the area as hunting grounds.

In 1803 the United States purchased from the French the area known as the Louisiana Purchase. This area included present Oklahoma except for the Panhandle. American explorers and traders soon traversed this territory to gain knowledge of the resources and to extend trade routes to Santa Fe. In 1818 the Quapaw ceded to the United States the area south of Canadian River, and the Choctaw settled there after their removal in the 1830s from southeastern United States. With the removal of the Chickasaw in 1837–38 they were given land in the central portion of the Choctaw Nation in Indian Territory, and in 1855 the Chickasaw formally separated from the Choctaw.

Early whites in the area included Holland Coffee and Abel Warren, who operated trading posts along Walnut Bayou around 1837. Prominent Chickasaw who settled in present Love County include Overton Love. In 1843 twenty-year-old Love came to Indian Territory from Mississippi and settled in Love's Valley (about six miles east of the Marietta area). Initially, Overton, one of the largest landowners of the Chickasaw tribe, farmed and raised cattle on his 8,000 acres of Red River bottomland. An astute entrepreneur he owned businesses and houses in Marietta. Love was a member of both houses of the Chickasaw National Council, served as judge of his county and district, and was a member of the Dawes Commission in Washington, D.C. He died in 1906, one year before statehood. To honor and show their appreciation, the delegation from Judge Love's district at the 1906 Constitutional Convention named Love County for him.

Marietta was founded in 1887 after the Gulf, Colorado and Santa Fe Railway (later the Atchison, Topeka and Santa Fe Railway) laid tracks north from the Texas border to Purcell. Much of this area was owned or leased by two of the largest ranchers in the Chickasaw Nation, brothers Jerry and Bill Washington. Some sources state that Jerry's wife was named Marie Etta, and the town was named in her honor. Others contend that the name refers to Marietta, Pennsylvania. On December 20, 1887, the Marietta, Indian Territory, post office was established, and Jerry Washington served as the first postmaster. The county courthouse, built in 1910, is listed in the National Register of Historic Places (NR 84003148). Designed by Walter E. Taylor, the edifice was built by the Falls City Construction Company at a cost of $65,000.

At 1907 statehood Love County's main crops were comprised of grain, hay, and cotton (a principal crop of the Chickasaw). In 1908 Love County had one grain elevator and twenty cotton gins. Livestock numbered twenty-five thousand cattle, seventy-five hundred hogs, five thousand horses and mules, and five hundred sheep and goats. Cattle breeds included Limousin, Simmental, Charolais, Hereford, Angus, and Brangus. The Dooley Ranch, near Marietta, pioneered embryo transplanting in cattle. By 1930 the county ranked third in the state for production of pecans. Diversification of crops also included the growing of peanuts and watermelons. Farms numbered 1,626 with an average size of 138 acres and a 72.1 percent tenancy rate.

In addition to agriculture-related businesses the principal employers have included the Marietta Bakery, Murray Biscuit Company, Marietta Sportswear, Robertson Hams, Rapistan Systems, Earth Energy Systems, and the Joe Brown Company. Butane, propane, and natural gas have been manufactured by Texaco, Chevron, and Cimarron Transmission. The Marietta Monitor, a weekly newspaper, has been owned and operated by the same family since 1896.

Early transportation was benefited by a number of ferries that operated and crossed the Red River, connecting future Love County with markets in Texas. One of the early operators was John Martin Tuck, who owned a ferry located eight miles southeast of Marietta. The Gulf, Colorado and Santa Fe Railway, constructed in 1887, ran north and south through the county. With the advent of automobiles in the early twentieth century, roads were built. At the turn of the twenty-first century Interstate Highway 35 and U.S. Highway 77 traverse the area in a north-south direction. State Highway 32 runs east and west, and State Highway 76 accommodates north-south traffic in western Love County.

Recreation areas include Lake Murray, Lake Texoma, and Hickory Creek. Lake Murray was constructed by the Works Progress Administration (WPA) and the Civilian Conservation Corps (CCC) and is known for water sports and camping. The Lake State Park is listed in the National Register of Historic Places (NR 96000490). Lake Texoma was completed in 1944 and offers fishing, camping, and water sports over its 91,200 acres of water. Hickory Creek's 8,000 acres of public year-round hunting covers the area from Lake Murray to Lake Texoma and includes Oil Springs, formerly famous for its medicinal waters.

The following (as per The Chicago Manual of Style, 17th edition) is the preferred citation for articles:
Susan L. Webb and Sandra L. Thomas, “Love County,” The Encyclopedia of Oklahoma History and Culture, https://www.okhistory.org/publications/enc/entry.php?entry=LO020.