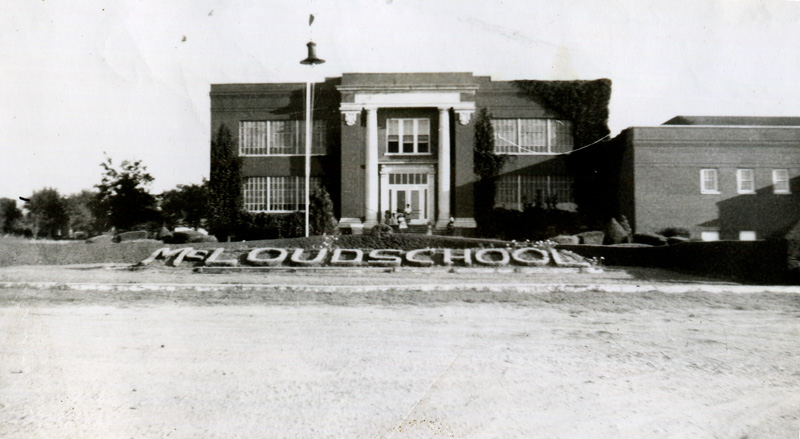 McLoud is situated in the northwestern quarter of Pottawatomie County, thirty miles east of Oklahoma City, at the intersection of U.S. Highway 270 and State Highway 102, three miles north of Interstate 40. Located on the North Canadian River, early-day McLoud was one of several towns known for manufacturing and selling whiskey to whites and American Indians. When flood destroyed the original, the small group of businesses moved about a mile south to higher ground. The McCloud post office, named after railroad attorney John William McLoud, was established in June 1895, and the spelling was changed to McLoud in October 1895. In 1900 McLoud had a population of 498, and by 1907 statehood it had risen to 783. In both cases it was the third largest town in the county. It reached 812 residents by 1930 and 837 by 1960. By 2000 the population was 3,548. By 2010 it had grown to 4,044. American Indians, predominantly Kickapoo, made up 14.1 percent of the population, and African Americans accounted for 6 percent.

By 1904 McLoud was an agricultural center with five cotton gins and two brick factories. Large quantities of produce, including fruit from local orchards, were shipped to outside markets by train. In 1949 the city was recognized as "the Blackberry Capital of the World" when the Chamber of Commerce sent a crate of blackberries to Pres. Harry S. Truman. McLoud continues to celebrate an annual Blackberry Festival in July. Over the years the town has served as a commercial center for nearby farm families. By the turn of the twenty-first century McLoud had become a "bedroom" community with many residents working in surrounding towns.

The following (as per The Chicago Manual of Style, 17th edition) is the preferred citation for articles:
Leah Horton Bird, “McLoud,” The Encyclopedia of Oklahoma History and Culture, https://www.okhistory.org/publications/enc/entry.php?entry=MC035.