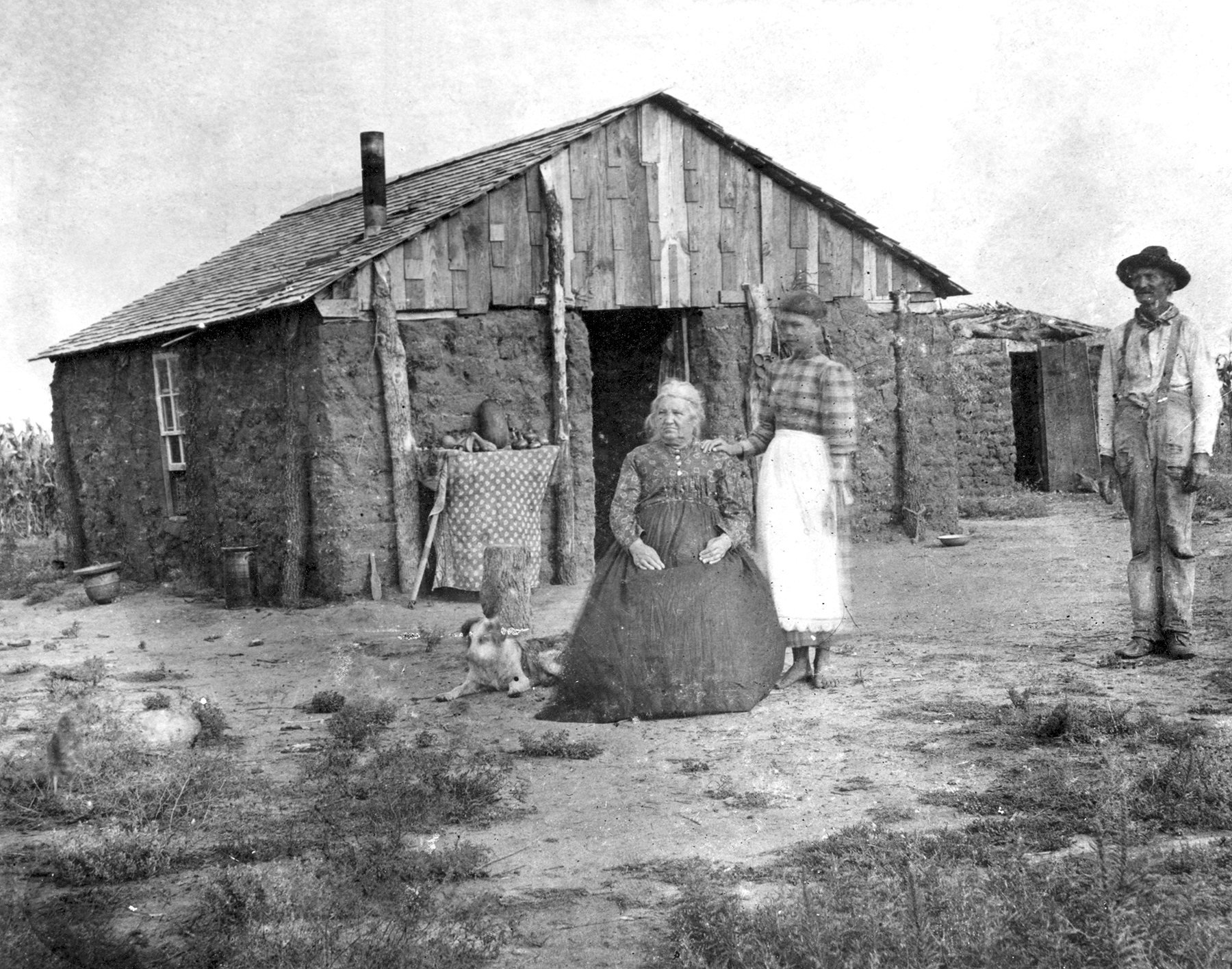 A family outside their sod house near Okeene, circa 1892
(14132, Oklahoma Historical Society Photograph Collection, OHS).

Okeene is located in the northeastern corner of Blaine County at the intersection of State Highways 8 and 51, twenty-two miles northeast of Watonga, the county seat. A townsite company established Okeene on April 19, 1892, during the Cheyenne-Arapaho land opening. T. H. Mansfield coined the town's name from the last syllables of Cherokee and Cheyenne. Originally the name was pronounced as a three-syllable word, O-Kee-Ne. A post office was established January 27, 1893, and the town was incorporated December 18, 1901. At 1907 statehood its population stood at 775. The 1910 and 1920 censuses reported 920 and 1,084, respectively.

The local economy has been based primarily on farming, cattle, and agricultural related industries. Many farmers in the surrounding area were of German descent. The Deutscher Anzeiger was published at Okeene at the turn of the twentieth century. Situated at the center of the Cimarron Valley, the town is surrounded by productive farmland suitable for diverse crops. However, wheat and hay are principally grown. Two railroads, the Enid and Anadarko Railway (conveyed to the Chicago, Rock Island and Pacific Railway in 1903) and the Blackwell, Enid and Southwestern Railroad (later the St. Louis and San Francisco Railway), connected Okeene with outside markets.

Okeene's population climbed slowly to 1,170 in 1950 and to 1,421 in 1970, peaking at 1,601 in 1980. Numbers declined to 1,343, 1,240 in 1990 and 2000, and 1,204 in 2010, respectively. Christman Airfield and Farmrail, a short-line rail system, served western Oklahoma's wheat-growing region. The town had two banks and a weekly newspaper, the Okeene Record. A public library and a number of churches, clubs, lodges, and organizations satisfied the cultural interests. A swimming pool, golf course, and city park provided recreational facilities. Nearby Roman Nose State Park and Canton Lake afforded additional recreation. The International Association of Rattlesnake Hunters was headquartered at Okeene, and a rattlesnake hunt was held annually. Local structures listed in the National Register of Historic Places were the Okeene Flour Mill (NR 76001555), the Shinn Family Barn (NR 83002076), and the Sooner Coop Association Elevator, West (NR 00001040).

The following (as per The Chicago Manual of Style, 17th edition) is the preferred citation for articles:
W. Dale Reynolds, “Okeene,” The Encyclopedia of Oklahoma History and Culture, https://www.okhistory.org/publications/enc/entry.php?entry=OK003.