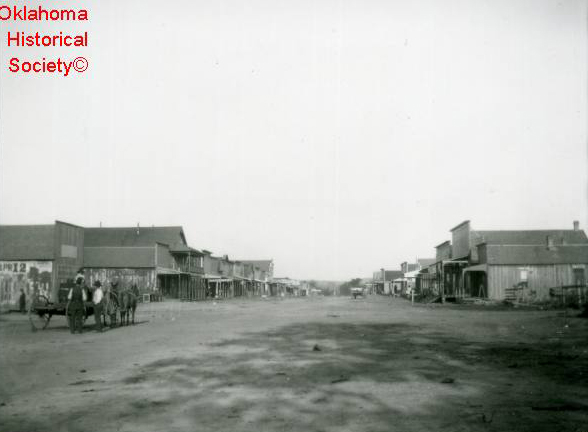 A namesake of the nearby Poteau River, Poteau, the Le Flore County seat, is located near the county's center, about twelve miles west of the Oklahoma-Arkansas border. In the early eighteenth century a band of French explorers entered this region and established trading posts, trafficking with the area's American Indians in furs and hides along the river they named Poteau. Their description of eastern Oklahoma, as well as their maps, somewhat accurately depicted the area. The French word, Poteau, translates into English as "post" meaning "military post" or outpost.

The town is situated in the valley between the scenic Cavanal and Sugar Loaf mountains. U.S. Highways 59, 270, and 271 serve the Poteau area. U.S. Highways 271 and 59 share a common route through the town. Poteau is the southern terminus of State Highway 112, whose northern terminus is the Oklahoma-Arkansas border near Arkoma and entire length is thirty miles.

Most of the Choctaw who removed to the West in the 1830s arrived by boat on the Arkansas River. They disembarked a few miles west of Fort Smith at a point they called Skullyville, which became the town at which they received federal annuity payments. It also served briefly as the Choctaw Nation's capital. A few of these new citizens traveled the thirty miles due south to establish residency in the present Poteau area. They were the vicinity's only inhabitants until the mid-1870s. Three white families had moved there by 1879.

In 1886–87 the Fort Smith and Southern Railway, soon purchased by the St. Louis and San Francisco Railway, laid tracks through the area on its route to Paris, Texas. Its line included a station at Poteau. In 1896 Kansas City, Pittsburg and Gulf Railroad (acquired by the Kansas City Southern Railway in 1900) initiated service through town. In 1887 a post office was established, and in 1898 the community incorporated. Poteau's location and the advent of rail service assured its becoming the region's principal city.

Poteau's greatest growth occurred between 1900 and 1915. In that interim, the population expanded from 1,182 to approximately 2,500. Coal mining served as the vicinity's earliest and most successful industry, and cotton production was sufficient to command a gin. Other twentieth-century industries have included hotels, and the manufacture of wood products such as chairs, glass bottles and cylinders, and bricks. Several other smaller businesses and retail outlets served the residents. By 1930 the population stood at 3,169 and increased to 4,428 by 1960.

Several newspapers have reported local news, including the Poteau Leader, the Poteau News, the Poteau Herald, the Poteau Journal, the Poteau Sun, the Poteau Valley Times, and the Poteau News and Sun. In 1926–27 the county constructed its present courthouse. In 1927 Poteau residents elected Nora Shaw as one of Oklahoma's first woman mayors. In 1933 Poteau Junior College opened. In 1971 it was renamed Carl Albert Junior College and in 1990 became Carl Albert State College. In 1950 the Le Flore County Memorial Hospital, later the Eastern Oklahoma Medical Center, opened. In 1955, after the Brown v. Board of Education of Topeka (Kansas) decision (1954), Poteau became the first state school district to announce that it would integrate. Veterinarian John Montgomery, a graduate of the Tuskegee Institute, spearheaded the integration policy and led the area's Civil Rights movement. In 2000 he was inducted into the Oklahoma Hall of Fame. In the 1950s Robert S. Kerr established a ranch outside of Poteau, and after his 1963 death, in 1978 the family donated it to the state. It later became the Kerr Conference Center and Museum.

The following (as per The Chicago Manual of Style, 17th edition) is the preferred citation for articles:
Harold Crain, “Poteau,” The Encyclopedia of Oklahoma History and Culture, https://www.okhistory.org/publications/enc/entry.php?entry=PO025.