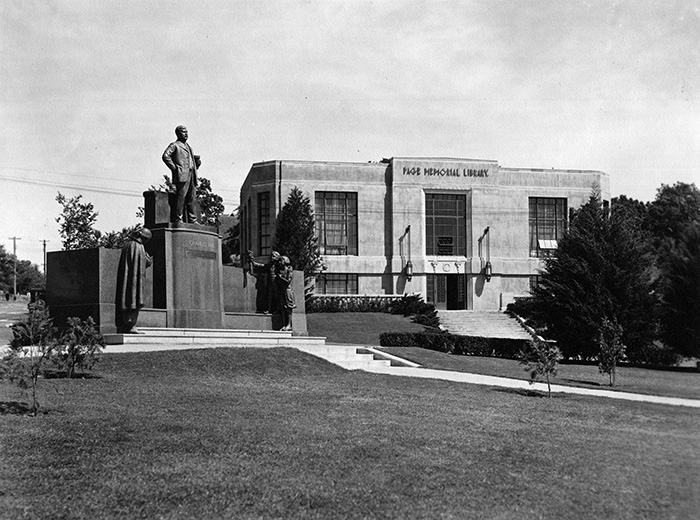 The city of Sand Springs is located in Tulsa County at the junction of U.S. Highway 64 and State Highways 51 and 97. The first recorded settlement in the area of what is now Sand Springs can be traced to as early as 1826 when a small band of the Cherokee resided in that general location. However, due to treaties with the Creek this area was transferred from the Cherokee to the Creek. Soon after the Creek took possession of the area, a Confederate Indian veteran of the Civil War, Lt. Thomas Adams, settled in the area with his family. The place was known for its clear springs used as a source of drinking water. However, eventually the Creek would also be moved. The only remaining sign of their settlement is a small cemetery located in the parking lot of the Keystone Plaza Shopping Center.

The history of Sand Springs began in 1908 with the purchase of 160 acres of land by Charles E. Page. He had become wealthy in the oil boom and was looking for a suitable place to give back some of the wealth and create a home for orphaned children. Starting with only a tent housing seven of them, the facility would grow into the Sand Springs Home. The tent was quickly replaced by a frame building capable of serving more than fifty children.

The early story of Sand Springs is the story of Charles Page and his wish to give back to the area. To that end and to help the children he decided to build a park, and according to the Tulsa World, in November 1909 Page received a shipment of deer that would form the basis of a small herd of deer, antelope, and bison for the Sand Springs Park, which also came to include amusement rides. By April 1915 all of the eighty-acre park with amusements, including a carrousel, a Ferris wheel, and a roller coaster, were in place. In addition to the park he also established a zoo.

Page built the Sand Springs Railway, which began in 1911 with the laying of line that carried two gasoline-engine rail cars to connect Sand Springs to Tulsa. Electric trolleys soon replaced this mode of transport. Receipts from the railroad and money from royalties from the gas wells located on Page's land supported the home. The interurban line lasted until January 2, 1955, when the last revenue-passenger car made its run from between Sand Springs and Tulsa. The Sand Springs Railway was also the last operating interurban in the state. Owned by Sheffield Steel since 1993, the railway still operated at the beginning of the twenty-first century.

Page also decided to form the City of Sand Springs to the west of the home. He offered free land to anyone who wanted to relocate. He established the aforementioned a transportation system connecting Tulsa and Sand Springs and offered companies a twenty-thousand-dollar relocation bonus.

The townsite of Sand Springs was laid out in 1911 with the building of the interurban, and the city was incorporated in 1912 with a population of approximately four hundred citizens. Along with the growth of commerce and residences, in 1917 a brick-and-steel edifice replaced the children's home building. Also in 1918 Page established a "widow's colony" there, allowing widows to maintain and keep together their families.

By 1918 Sand Springs's population had grown to an estimated nine hundred. They supported two banks, a hotel, a local newspaper (the Leader), and all of the amenities equal to any city in the state. Some of these were the Kerr Glass Manufacturing Company, Commander Mills, Southwest Box Company, and Sinclair Prairie Refineries. The city was also known for its social and medical institutions, including the Sand Springs Home, Oakwood Sanitarium, Poole Hospital, the Salvation Army Maternity Home, and the Sand Springs School for the Deaf.

Other city services also developed. In 1920 the census indicated that the population had grown to 4,067. In 1920 a dam was constructed across Shell Creek to supply the growing community with water from newly formed Shell Creek Lake. Because he was in competition with the Spavinaw Water Project, Page offered to sell some of the new lake's water to Tulsa. Tulsa declined the offer. The Simms Airport opened as a private airport in 1947 and closed in 1986. Sand Springs opened its municipal airport in May 1971. The name was changed in 1975 to William R. Pogue Airport to honor the Skylab 4 astronaut.

Sand Springs would continue its growth and remain a center for industrial development. By 1930 the city's population had risen to 6,674. In 1932 the community was home to seven auto businesses, a canning plant owned by the Sand Springs Home, a creamery, a foundry, two glass factories, two cotton gins, two ice companies, three laundries, an oil refinery, a textile mill, and many more businesses. This was not to say all that was well, as Sand Springs lost part of its population during the Great Depression years. The population declined to 6,137 in 1940. By 1950 the figure reached 6,994. This trend would continue, and in 1960 the figure was 7,754, and in 1970, 10,565. The 1980 population stood at 13,121, and in 1990, 15,346 persons resided there. The city had a charter in place by 1969 and since that time has operated under a council/manager form of government. In 1965 Sand Springs also annexed Prattville, on the south side of the Arkansas River, an event that explains the large jump in population in the1960s.

In 2000 the city had a population of 17,451 persons. Sand Springs at that time was home to a number of companies, such as Webco Industries, Sheffield Steel Corporation, Rader Diagnostic Center, Smith-Fibercast, Cust-O-Fab, Piping Companies Incorporated, and Baker Petrolite. In addition to Charles Page other Sand Springs personalities include Jerry Adair, a retired baseball player and Oklahoma State University Hall of Fame Athlete, and well-known professional basketball player Marques Haynes, a Basketball Hall of Fame inductee. In 2010 the census counted 18,906 residents of Sand Springs.

Clarence B. Douglas, The History of Tulsa, Oklahoma: A City with a Personality (Chicago: S. J. Clarke Publishing Co., 1921).

The following (as per The Chicago Manual of Style, 17th edition) is the preferred citation for articles:
Carl E. Gregory, “Sand Springs,” The Encyclopedia of Oklahoma History and Culture, https://www.okhistory.org/publications/enc/entry.php?entry=SA017.