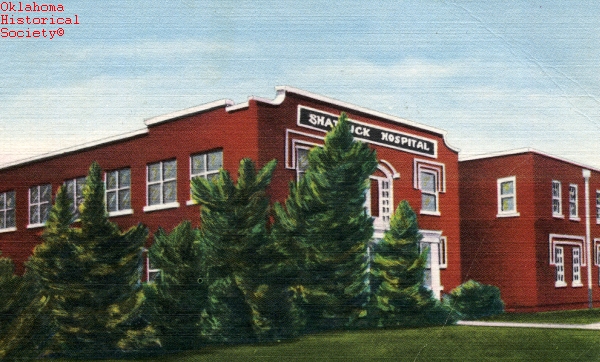 The Ellis County town of Shattuck is located in the central part of the county, twelve miles northwest of Arnett, the county seat, and on State Highway 15, twenty-nine miles southwest of Woodward. U.S. Highway 283 also runs through the town. This section of Oklahoma, once the realm of Plains Indian peoples, was later part of the Cherokee Outlet. In 1887 the Southern Kansas Railway (later part of the Atchison, Topeka and Santa Fe Railway) built tracks across the corner of northwestern Oklahoma from Kiowa, Kansas, through Fargo, Gage, and Shattuck to Higgins, in the Texas Panhandle. A railroad water station called Norice existed at the site of future Shattuck from that time. When the area was opened to non-Indian settlement by land run in 1893, it became part of Woodward County. Farm families soon populated the townships. As a blacksmith shop, a store, and a school appeared around Norice, it was given a postal designation of Shattuck, named for a Santa Fe railroad director, in November 1893. The post office was housed in T. N. Miller's store, and William H. Robb was the postmaster. The original town was surveyed and platted in 1901.

In addition to Anglo-American homesteaders during and after the 1893 opening, Germans from Russia (German in ethnicity but Russian by birth) settled in the area in 1901 and 1902. They had previously lived in Marion County, Kansas. Their settlement was homogeneous, in that most of them had come from four towns in the Volga River valley and most were Seventh-Day Adventists. In Ellis County the Germans from Russia formed an ethnic island around Shattuck, and they made their living by wheat farming. As Shattuck is only seven miles from the Texas state line, others settled around Higgins, in Lipscomb County.

A bustling railroad, agriculture, and livestock center, Shattuck was incorporated in 1906 from surrounding Ohio Township. At 1907 statehood, when Ellis County was created, it took in the portion of Woodward County in which Shattuck was situated. Shattuck residents campaigned to make their town the new county's seat, and an election held in August 1908 between Gage, Shattuck, and Arnett resulted in a runoff between the latter two. The more centrally located Arnett won, although Shattuck was a larger town.

The 1907 census counted 1,009 residents and the 1910 census, 1,221. By then the city government maintained a municipal water system and electric plant. Economic activities included the Ingle brothers' broomcorn warehouse, Frank Fox's glove factory, the Ellis Stone Manufacturing Company, a sorghum mill, a brick factory, and a cigar maker. Numerous general stores and numerous specialty establishments provided goods. Two banks and three churches served the residents. Agribusinesses included a cotton gin, a roller mill, and a grain elevator. The Square Dealer and the Monitor printed the news. Ten years later many of the same types of retail and service businesses remained, though fewer in number, and the manufacturing establishments had closed. The 1920 population reached 1,365. Other newspapers serving Shattuck and the surrounding area have included the Ellis County News and the Shattuck Homesteader. The Ellis County Socialist published in the pre–World War I decade. The Northwest Oklahoman and Ellis County News began in the 1930s and continued in publication at the end of the twentieth century.

Shattuck grew steadily through the first decades of the century, due to its location on the railroad. In 1920 the Santa Fe Railway completed a new line from Shattuck to Spearman, in the Texas Panhandle, connecting to Colorado markets. The town sheltered 1,490 inhabitants in 1930 and supported seven grocers, five restaurants, four elevators, a mattress factory, and a flour mill. Cream stations and produce dealers were also active. After losing about two hundred during the Great Depression, by 1950 the community had recovered to 1,692. Businesses active during the post–World War II decades included the usual grain and produce buyers, implements dealers, and feed/seed dealers typical of a moderate-sized agricultural service center. Providing medical care was Newman Memorial Hospital, locally called "the Mayo of the Plains," founded in 1908 as Northwest Sanatorium by Dr. O. C. Newman, who later trained at the Mayo Clinic. In the 1920s and 1930s he enlarged the building and in 1949 gave the hospital to the city for municipal health care. The facility has served a four-state region throughout the century.

Shattuck's population remained steady through the 1960s and reached its peak at 1,759 in 1980. Representing the region's heritage, the Shattuck Windmill Museum and Park exhibits more than fifty reconstructed early-day windmills and a dugout house. The First State Bank (NR 83004170) and Shattuck National Bank (NR 83004171) buildings are listed in the National Register of Historic Places. As the twentieth century ended, large reunions of German-Russian families such as the Schoenhals and Pshigodas still occurred annually, and a Heritage Fest was held each summer and a Harvest Fest each autumn. Shattuck native and music composer Val Johns, author of "I'd Like to Teach the World to Sing" and recipient of two Grammys and an Academy Award, has resided there since retiring. In 2000 the census recorded 1,274 inhabitants. In 2010 Shattuck had grown to 1,356 and remained the largest town in Ellis County.

Doug Hale, The Germans From Russia in Oklahoma (Norman: University of Oklahoma Press, 1980).

The following (as per The Chicago Manual of Style, 17th edition) is the preferred citation for articles:
Dianna Everett, “Shattuck,” The Encyclopedia of Oklahoma History and Culture, https://www.okhistory.org/publications/enc/entry.php?entry=SH010.