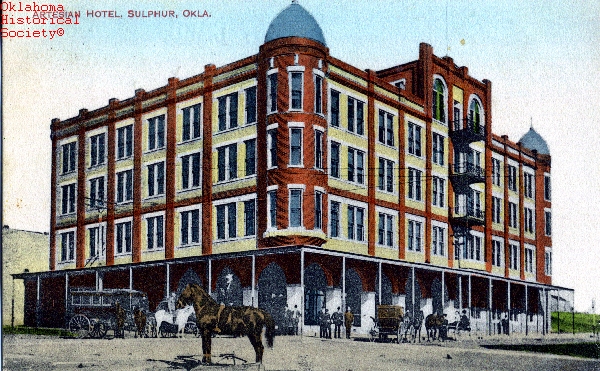 Sulphur, the county seat of Murray County, is situated at the intersection of U.S. Highway 177 and State Highway 7, eighty-four miles southeast of Oklahoma City. Even before the town's founding the Sulphur vicinity was known for its mineral springs. In 1878 Noah Lael, son-in-law of former Chickasaw Gov. Cyrus Harris, established a ranch south of Pavilion Springs. His house was Sulphur's first residence. Lael sold the ranch to Perry Froman, an intermarried Chickasaw, in 1882.

Sulphur developed in the early 1890s when conventions and gatherings were held at the springs. Around 1890 fishermen built a clubhouse there. They enlarged and sold the building as a hotel. Richard A. Sneed, a lawyer and farmer and future Oklahoma secretary of state and state treasurer, visited the area circa 1890 and afterward organized the Sulphur Springs Company. He and stockholders bought land from the Froman Ranch and platted a townsite. The Sulphur post office was established on October 2, 1895, with William J. Bloomer as postmaster. The Sulphur Headlight, the town's first newspaper, was published in 1899. In 1900 the community had 1,198 inhabitants. The Sulphur Springs Railway reached Scullin in 1902 and was sold to the St. Louis and San Francisco Railway in 1907.

In 1902 the federal government created the 640-acre Sulphur Springs Reservation. When the Chickasaw Nation deeded the land to the Department of the Interior, the town's residents had to relocate. Some moved to a hill on the east side of Rock Creek. Others settled west of the reservation but vacated again after the government added more than two hundred acres to the park in 1904. They moved north and resided west of the creek. Thus, there was West Sulphur and East Sulphur on opposite banks of Rock Creek with no bridge between. A rivalry developed as the sections vied for prominence. Then in 1909 residents built the Washington Bridge. Inside the structure they buried a hatchet for peace and a horseshoe for prosperity. In 1904 the name of Sulphur Springs Reservation was changed to Platt National Park, the present Chickasaw National Recreation Area.

Sulphur flourished as a resort. Stores and refreshment stands were built around Pavilion Springs. The post office was the center of the "East Side," and businesses opposite the springs developed the "West Side." The Belleview Swimming Pool was billed as Oklahoma's largest, and the Vendome Well remains the state's largest artesian spring. Its sulphur water fed a stream that converged with Travertine Creek and formed a small lake. People smeared the lake's mud on their bodies to cure ailments.

The Sulphur public schools opened in 1904. On December 9, 1908, Sulphur defeated Davis in an election determining the county seat. The State School for the Deaf was established in East Sulphur in 1908, and the Soldier's Tuberculosis Sanitarium (presently a Veterans Center) was constructed in Platt National Park in 1922. Sulphur was incorporated in 1908. Its economy remains dependent upon tourism. Local asphalt, lead, and zinc mines were once profitable.

The following (as per The Chicago Manual of Style, 17th edition) is the preferred citation for articles:
Dennis Muncrief, “Sulphur,” The Encyclopedia of Oklahoma History and Culture, https://www.okhistory.org/publications/enc/entry.php?entry=SU005.