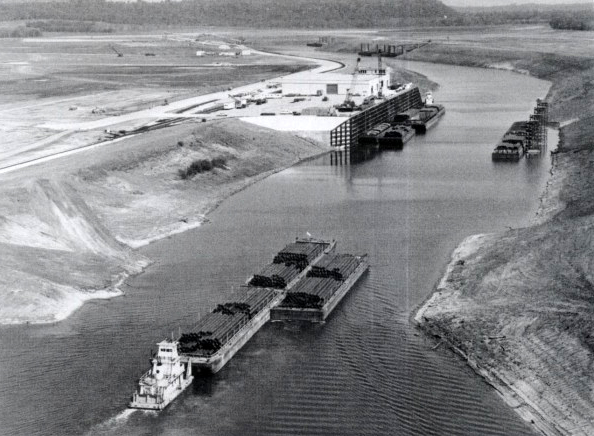 The Tulsa Port of Catoosa is the head of navigation of the McClellan-Kerr Arkansas River Navigation System, a 445-mile waterway that links the Verdigris and Arkansas Rivers, the Arkansas Post Canal, the White River, and the Mississippi River. The waterway provides a nine-foot-deep channel with a total lift of 420 feet through eighteen locks and dams, thirteen in Arkansas and five in Oklahoma. Each lock chamber is 110 feet wide and 600 feet long.

Modern navigation in eastern Oklahoma can plausibly be dated to 1907 when Gov. Charles N. Haskell asked Congress to authorize a study of the feasibility of navigating the flood-prone Arkansas River. Authorized in 1938, the study was completed five years later. In 1943 a catastrophic flood in the Arkansas River Valley prompted Congress to pass the Rivers and Harbors Act of July 24, 1946, which allotted funds to transform the Arkansas River into a navigable waterway. Pres. Harry Truman signed the legislation that year.

The U.S. Army Corps of Engineers developed the Arkansas River for navigation, creating the Corps's largest civil works project to date. In addition to allowing safe passage for barges, the project aimed to control flooding and provide for hydroelectric power generation. Bank reconstruction along the Arkansas River began in 1952, and lock construction in 1963. Total cost was estimated at $1.2 billion.

The last section of the waterway, from Muskogee to the soon-to-be-dedicated Tulsa Port of Catoosa, was opened on December 31, 1970. On January 5, 1971, the waterway was named for U.S. Sen. John L. McClellan of Arkansas and U.S. Sen. Robert S. Kerr of Oklahoma. Both had worked to realize the dream of a navigable waterway. As a former Oklahoma governor and as chair of the U.S. Senate Rivers and Harbors Subcommittee of the Public Works Committee, Kerr had used his political power to secure the project's funding.

On January 21, 1971, a barge carrying newsprint from Tennessee completed the first commercial trip along the water corridor from the Mississippi River to Catoosa. On February 20 the Tulsa Port of Catoosa officially opened for business. In June Pres. Richard M. Nixon formally dedicated the McClellan-Kerr Arkansas River Navigation System (MKARNS).

The two-thousand-acre Tulsa Port of Catoosa is designated a foreign trade zone. The Tulsa port is MKARNS's largest and is also the largest, most inland port on the twenty-five-thousand-mile Gulf Intercoastal Waterway. By linking mid-America to New Orleans and the Gulf Intercoastal Waterway, MKARNS provides access to domestic and worldwide markets for agricultural and industrial products. Barges annually carry an estimated thirteen million tons and offer significant cost savings compared to other modes of transportation. The Tulsa Port of Catoosa handles a wide range of agricultural products, fertilizer, and industrial cargo including, sand, rock, steel, petroleum products, natural gas industry supplies and equipment, and petrochemical plant equipment.

Kathleen M. Wallis, People of the Past: A Brief Guide to the McClellan-Kerr Arkansas River Navigation System from Catoosa to Fort Smith (Tulsa: Corps of Engineers, Tulsa District, 1978).

The following (as per The Chicago Manual of Style, 17th edition) is the preferred citation for articles:
Michael J. Hightower, “Tulsa Port of Catoosa,” The Encyclopedia of Oklahoma History and Culture, https://www.okhistory.org/publications/enc/entry.php?entry=TU028.