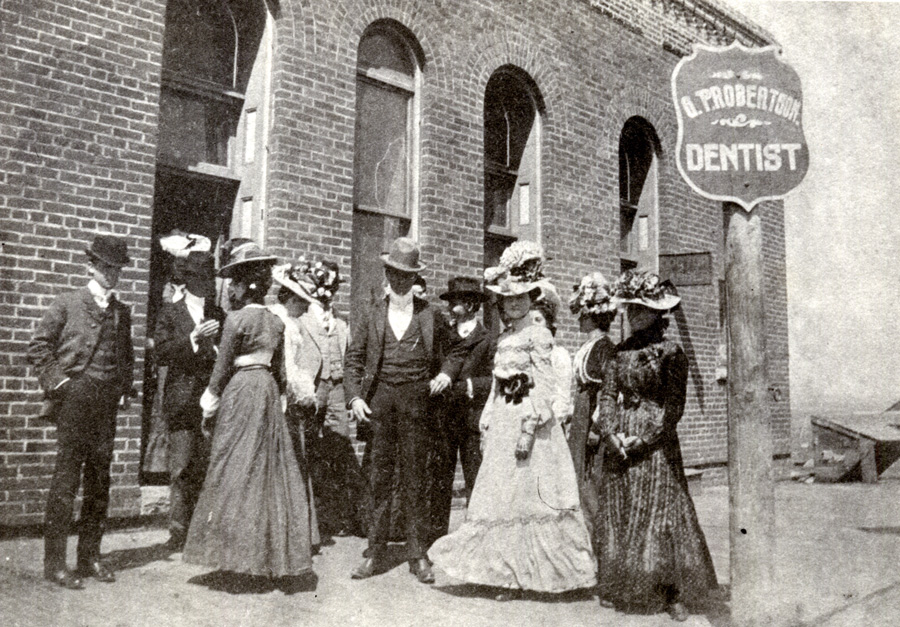 Yukon is located in the central portion of the east side of Canadian County, just outside Oklahoma City. In addition to U.S. Highway 66, also called historic Route 66, the town is traversed by State Highways 4 and 92 and is immediately north of Interstate 40. A. N. Spencer founded the town in 1891. Associated with the Choctaw, Oklahoma and Gulf Railway, Spencer made an agreement with Minnie Taylor and Luther S. Morrison to plat a townsite and lay the train tracks through the town in exchange for half the lots. Taylor and Morrison, who had acquired the land by homestead following the opening of the Unassigned Lands in 1889, deeded the land to Spencer, who then platted it before deeding half of the lots back to Taylor and Morrison.

As planned, the railway company laid its track through Yukon in 1891, causing the abandonment of the nearby town of Frisco, population 1,000. Beginning in about 1898 Yukon began attracting a sizeable Bohemian population. Following World War I and the dissolution of Bohemia into Czechoslovakia and Moravia, the Yukon Bohemians became "Czechs." This heritage is still recognized today. Yukon has been proclaimed "the Czech Capital of Oklahoma" and since 1966 has held an annual Czech Day in October. A tangible reminder of the Czech presence is the historic Jan Zizka Lodge Number 67, popularly known as Czech Hall (listed in the National Register of Historic Places, NR 80003258), located two miles south of town.

Situated in proximity to fertile farmland, Yukon quickly thrived as the urban center for area farmers. By 1905 the town had an organized library and by 1927 a dedicated public library building (NR 84002977) was constructed on Elm Street. Dominating Yukon's industry for decades was the Yukon Mill and Grain Company. Founded in 1893 as a small elevator and acquired by John F. Kroutil, Frank L. Kroutil and A. F. Dobry in about 1903, the mill became the largest flour plant in the state as well as in the Southwest. By the 1930s the mill had a capacity of two thousand barrels of flour per day. Selling out in 1933 to the Kroutil family, the Dobry family started a second mill across the street, aptly called Dobry Mills. Both mills continued in operation for many decades before being sold to larger corporations, with Shawnee Mills purchasing the Yukon Mill and Grain Company and Mid-Continent the Dobry Mills. In 1972 Mid-Continent purchased the historic Yukon Mill and Grain Company, and it remains in operation on Yukon's Main Street. Also on Main Street is the historic Mulvey Mercantile (NR 82003670). Constructed in 1904, the general store was the largest retail operation in Yukon until the 1930s when the Great Depression forced its closure.

The main thoroughfare in Yukon has further acclaim due to its association with U.S. Highway 66. Designated in 1926, Route 66 was a major transportation artery through the town for decades before the four-lane Interstate 40 displaced it in the 1960s. Like its predecessor, Interstate 40 has created a commercial vacuum, attracting restaurants, gas stations, and other businesses along its off-ramps. The commercial strip at the main Yukon exit, renamed Garth Brooks Boulevard in the 1990s for one of the town's favorite sons, has expanded to the south side of the Interstate. A major construction boom occurred there just after the beginning of the twenty-first century.

Another momentous event in the 1960s was the annexation of the surrounding area by Yukon and Oklahoma City. Oklahoma City annexed property nearly all around Yukon, whose city officials responded by annexing any remaining land. With such proximity, Yukon quickly began to attract numerous workers from Oklahoma City who sought a smaller town environment. In addition to fueling massive housing development, particularly on the south and east sides of town, commercial development also received a significant boost.

Yukon has had several newspapers throughout its history. The Yukon Register began publication in 1893 and the Yukon Weekly in 1894. The latter continued through 1900 before combining with the Yukon Sun. The Yukon Sun was succeeded by the Yukon Oklahoma Sun in 1923, which continued to publish under that name until 1966. In 1967 the Yukon Review opened operations and continues to be the town newspaper. The city uses a council-manager form of government.

The following (as per The Chicago Manual of Style, 17th edition) is the preferred citation for articles:
Cynthia Savage, “Yukon,” The Encyclopedia of Oklahoma History and Culture, https://www.okhistory.org/publications/enc/entry.php?entry=YU002.