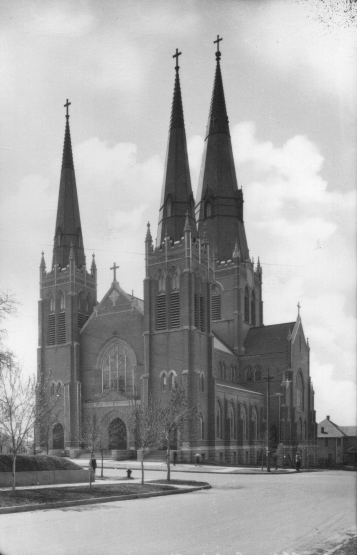 The expeditions of Francisco Vásquez y Coronado and Hernando de Soto into middle America in 1541–42 had among their stated aims the evangelization of Native inhabitants. Each expedition included about a dozen Roman Catholic priests who were assigned to minister to the expedition members and to preach the gospel to the Indians. To the extent that either of these exploratory ventures can be said to have come into or near the region that is present Oklahoma, these efforts represent the earliest Catholic presence in the state.

Evidence of Catholic missionary activity in Oklahoma is well documented in 1830. A Jesuit priest from Belgium, Charles Van Quickenborne (1788–1837), operating from a mission near St. Louis, Missouri, visited the Claremore band of Osage. Records state that he offered Mass at Chouteau's Post, at Nathaniel Pryor's Osage subagency, and at some point along Cabin Creek. In 1847 the Jesuits established a mission for the Osage in present Neosho County, Kansas, and priests from this locality made periodic visits to the Indian Territory over the next forty years. Other missionaries, stationed at Fort Smith, Arkansas, in Kansas, and Texas, occasionally attended the Indian camps and military forts scattered throughout the region. Arkansas priest Michael Smyth encouraged Irish railroad workers to build Oklahoma's first Catholic church, St. Patrick's at Atoka, in 1872.

Two French Benedictine monks, Isidore Robot (1837–87) and Dominic Lambert (1838–1915), became the first permanently resident Catholic missionaries when they arrived in October 1875 to establish a new monastery for their brethren who were being threatened with expulsion from France. Sacred Heart Mission in the Potawatomi Nation was established in May 1877. From this foundation grew today's St. Gregory's Abbey and University.

Although early activity was focused on the American Indians, especially the Osage, Potawatomi, Quapaw, and to a lesser extent, the Choctaw, the Catholic ministry to Oklahoma would be grounded in Caucasian immigration. The arrival of Italian coal miners, German and Polish farmers, and Irish and Lebanese merchants would provide the church's foundation in Oklahoma. The 1889 Land Run and the successive openings that followed it provided the real impetus for further church growth.

In 1891 Bishop Theophile Meerschaert (1847–1924) was appointed to the newly established Vicariate Apostolic (missionary region) of Indian Territory. With his headquarters first at Guthrie and then at Oklahoma City, he remained bishop in Oklahoma until his death in 1924. During his tenure the vicariate was raised to a full-fledged diocese (from August 17, 1905). Meerschaert also initiated the "sacramental wine case," DeHasque v. Atchison, Topeka, and Santa Fe Railroad Company (1918), a notable event in the history of American religious freedom. In this case, Oklahoma State Supreme Court held that the "Bone Dry Law" (Oklahoma's legislation against alcoholic beverages) did not to apply to wine used in religious ceremonies.

Among the notable members of the Catholic clergy in this period was William Henry Ketcham (1868–1921). The first priest ordained by Meerschaert (in 1892), he was first pastor at Muskogee, responsible for some eighteen thousand square miles in northeastern Oklahoma (1892–96), and then at Antlers (1896–1900), in charge of evangelizing the Choctaw. In these assignments he opened several churches and built Indian mission schools at Muskogee, Quapaw, and Antlers. In 1900 he became assistant director of the Bureau of Catholic Indian Missions, Washington, D.C., and the following year he was named a director, a post he held until his death. Pres. William Howard Taft, a personal acquaintance, appointed him in 1912 to the U.S. Board of Indian Commissioners. In 1906 he brought to a successful conclusion before the U.S. Supreme Court the case of Quick Bear v. Leupp (1908), which upheld the legal disbursement of federal trust funds to private religious schools, at the designation of Indian tribes, as tuition religious schools. He also was a principal agent in bringing about separate tribal status for the Mississippi Choctaws.

Meerschaert's successor as bishop of Oklahoma was Francis Clement Kelley (1870–1948). A well-respected author, lecturer, and publisher, Kelley had founded a successful missionary funding organization, the Catholic Church Extension Society. His twenty-four years in Oklahoma were marked by several significant advances, although his efforts were frustrated by national conditions in the 1930s and 1940s. In 1930 the Diocese of Oklahoma was renamed the Diocese of Oklahoma City and Tulsa, to recognize the importance of Tulsa's Catholic population within the diocese. Kelley suffered a series of small strokes in 1942, and his condition led to the appointment of Bishop Eugene McGuinness (1889–1957) as the diocesan administrator in 1944. At Kelley's death, on February 1, 1948, McGuinness automatically succeeded him.

The optimism of the postwar period, tempered by new threats from the Soviet Union and China, encouraged Catholic growth nationally and in Oklahoma. McGuinness concentrated on recruiting priests for his expanding flock. So successful was he that during the 1960s Oklahoma actually had one priest for every 250 Catholics.

Victor J. Reed (1905–71) was Oklahoma's fourth Catholic bishop, appointed by Rome in 1958 following McGuinness' death. His tenure was marked by the major changes engendered by the Second Vatican Ecumenical Council (Vatican II, 1962–65) and American military involvement in the Vietnam War (1962–73). Vatican II gave rise to severe tensions between those who were anxious for further reforms and those who were unprepared for any reform. Rising expectations caused the departure of many priests and sisters. Attitudes toward the war and the church's reexamination of its traditional stance toward war caused further friction. In 1967 Reed became the first American Catholic bishop publicly to question the war when he signed a petition for a group called Negotiation Now.

Reed also began the official process, interrupted by his sudden death in September 1971, toward the creation of a second diocese in Oklahoma. The process was carried forward by his successor, John R. Quinn (1929–2017), when he took office the following January. Formal ceremonies took place on February 6, 1973, in Oklahoma City, which became an archdiocese with Quinn as archbishop, and in Tulsa the following day. Selected as first bishop of the new Tulsa diocese, comprising thirty-one counties in eastern Oklahoma, was Bernard J. Ganter (1928–93), of Houston, Texas. Ganter served in Tulsa five years until his transfer to Beaumont in 1977. He had responsibility for erecting the organizational infrastructure of the new diocese.

In 1977 Archbishop Quinn was appointed to lead the Catholics of San Francisco, California. He was subsequently elected president of the United States Conference of Catholic Bishops. He also chaired the national bishops' committee on doctrine and helped adjudicate several church controversies. He retired in 1995.

Quinn's successor in Oklahoma City was Charles A. Salatka (1918–2003). During his fifteen years as archbishop he consolidated the fiscal resources of the see and situated the church better to serve the needs of the growing Hispanic population in Oklahoma. He also moved the archdiocesan headquarters to the site of a former seminary built by McGuinness on Northwest Expressway in Oklahoma City.

Bishop Ganter was followed in 1978 by Eusebius J. Beltran (1934– ), from Atlanta, Georgia. He concentrated on developing Catholic Charities of Tulsa and on rescuing a diocesan school system in difficulty. He also was active in recruiting men for the priesthood; while in Tulsa he ordained some thirty-five new priests. When Salatka retired in 1992, Beltran was appointed third archbishop of Oklahoma City.

At the end of the twentieth century the bishop of Tulsa was Edward J. Slattery (1940– ), a Chicago priest and formerly head of the Extension Society founded by Bishop Kelley. He had been ordained bishop in Rome by Pope John Paul II in January 1994. In 2000 the Catholic population of Oklahoma stood at 160,898, or approximately 4.6 percent of the total population, a percentage that had held steady over the past one hundred years.

James D. White, Getting Sense: The Osages and their Missionaries (Tulsa, Okla.: The Sarto Press, 1997).

James D. White, The Souls of the Just: A Necrology of the Catholic Church in Oklahoma (Tulsa, Okla.: The Sarto Press, 1983).

The following (as per The Chicago Manual of Style, 17th edition) is the preferred citation for articles:
James D. White, “Catholic Church,” The Encyclopedia of Oklahoma History and Culture, https://www.okhistory.org/publications/enc/entry.php?entry=CA072.