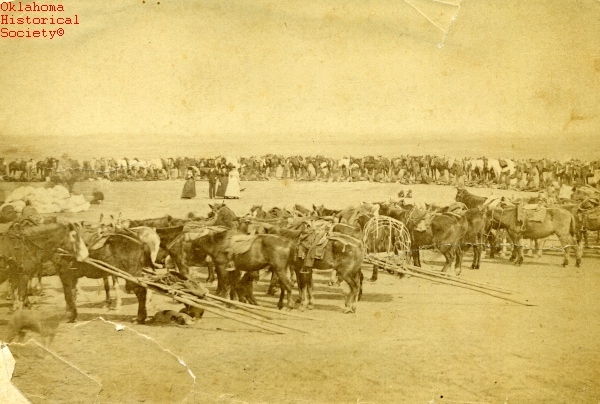 The Comanche Nation of Oklahoma is headquartered in Lawton and had approximately ten thousand members in 2003. The name Comanche is probably from a Southern Ute word meaning "enemy," or more generally "stranger" or "other." The Comanche called themselves numunuu and spoke a language related to that of the Shoshone of Wyoming and Idaho. An oral tradition ascribed the split to a dispute between two camps that was settled by one group moving south to become the Comanche while the other moved west to become the Shoshone. Of possible equal importance in the Comanches' move south was the desire to gain access to the Spaniards of New Mexico and Texas.

Comanches were reported in northeastern New Mexico in the early 1700s and, although the majority lived there and in Texas, they utilized various parts of Oklahoma. Historically, the eastern Kotsotekas ("buffalo eaters"), some of whom were later called Tenewa ("downstream"), was the most important Comanche division in Oklahoma before the reservation, although Yamparika ("root eaters") were frequent visitors to the North Canadian valley in the Panhandle. By the 1780s villages of Comanches Orientales (Eastern Comanches) were along the Red River and in the Wichita Mountains. The Penatekas ("honey eaters") historically ranged from south to central Texas, and the Kwahada (Quahadi, "antelope") resided in the high plains of the Llano Estacado.

In 1834 the Dodge-Leavenworth Expedition visited a Comanche village in the Wichita Mountains, and in 1835 the Treaty of Camp Holmes was signed by (probably) Tenewa Comanches. Comanches frequently visited the Camp Holmes trading post of Auguste P. Chouteau and Chouteau's post at Fort Gibson. In the late 1830s, armed with firearms supplied by the Chouteau family, the Comanche and their Kiowa allies fought several battles along the North Canadian River in the Oklahoma Panhandle against encroaching Southern Arapahos and Cheyennes. Comanches sometimes visited the Salt Fork of the Arkansas in northern Oklahoma.

Members of other Indian nations in the Indian Territory often visited Comanche villages to trade for horses. In October 1858 a Penateka Comanche encampment was attacked by U.S. Army forces under Earl Van Dorn during the Battle of the Wichita Village near present Rush Springs. In the late 1850s the Penateka were forced out of their reservation in Texas and were reestablished at Fort Cobb on the Washita River, although there was no official reservation for them. The Treaty of the Little Arkansas in 1865 established a reservation including much of western Oklahoma and the Texas Panhandle. The 1867 Treaty of Medicine Lodge Creek reduced this to a reservation totally within the boundaries of Oklahoma. It was not until 1875, with the arrival of the Kwahada Comanches, under Quanah Parker, that most of the Comanches inhabited the reservation.

Initial Comanche settlement on the reservation was centered on Fort Sill, with a secondary center at Anadarko. Soon, groups spread out along East and West Cache creeks and their tributaries and along the Washita and Little Washita rivers. There is no evidence that the prereservation local bands and regional divisions retained any coherence in the postreservation settlement pattern. After protests, which reached the U.S. Supreme Court in the infamous Lone Wolf v. Hitchcock (1903) decision, the Kiowa-Comanche-Apache reservation was allotted to individuals in 160-acre parcels in 1901. Except for several parcels set aside as wood reserves and pastures, the remainder was declared surplus and op-ened for settlement. Those reserved pastures were allotted in 1906.

The English terminology utilized to describe Comanche social structure is vague and often confused, with the term "band" used to refer to several different levels of organization. The principal unit of Comanche domestic economic production and consumption was the extended family, living in several adjacent tipis. Groups of related extended families that regularly lived and traveled together are best characterized as "local bands" or "villages"; they recognized the head of the core family as the group's headman or paraivo. At the regional level were "divisions," groups of bands that shared common political interests; the divisional leader was selected (some reports say "elected") from among the constituent local band headmen. There was a freedom of movement between all of these units, and Comanche political history is marked by a fluidity of organization.

Prereservation Comanche economy was focused on the products, animal and vegetal, of the Great Plains. While the latter were harvested primarily for domestic use, the former provided meat, tallow, and hides, which could be traded for other necessities. Later those products included the animals themselves, in the form of horses and cattle, which were traded both east and west. However, Comanches did not actively raise those animals but obtained them in raids into Texas and Mexico. During the Civil War the Union army in New Mexico encouraged those raids; indeed, the army's own beef contractor was often in Comanche camps to arrange purchases.

During the reservation period government policy was aimed at trying to make farmers out of individual Comanches; this generally failed. There was slightly better luck at encouraging horse and cattle raising, but again with minimal success. The agents managed the leasing of reservation lands, initially to Texas cattlemen and, after allotment, to individual farmers. Oil and natural gas leases from the bed of the Red River provided some tribal income in the 1930s, and in the 1970s and 1980s some individuals became wealthy from leases on their allotments. Following the legalization of Indian gaming in the 1990s, a casino was opened at the tribal headquarters in Lawton. By the twenty-first century proceeds were funding numerous tribal initiatives.

Traditional Comanche law-ways distinguished between the private and domestic sphere and the public sphere. Domestic affairs included berry picking, hide tanning, and the specifics of trade; marriage arrangements (including divorce), nanawoku (damages for adultery), and even murder, were private matters. In the event the private and domestic became public and political, as when a nanawoku feud began with a refusal to pay damages, or in retaliation for damages taken, "the chief usually stepped in and tried his best to quiet things down." Communal hunting, intertribal trade, and peace making were public and community matters, subject to discussion and debate at informal gatherings, called "smoke lodges," and at more formal councils.

Various Comanche groups made treaties with the Spanish, Mexican, United States and Confederate governments. Of those, the most important was the 1867 Treaty of Medicine Lodge Creek, which laid the foundations of Comanche relations with the federal government for the next half century and beyond. The Comanche signers, mostly Yamparikas, agreed to a joint reservation in western Oklahoma and to political confederation with the Kiowa and Plains Apache (the present Apache Tribe of Oklahoma); this confederation became known as the KCA. A joint KCA "tribal" business committee was established, although never fully formalized, in the late 1890s. After allotment, because there were no longer any "tribal" assets, the KCA was inactive between 1917 and 1922. The KCA was never a strong organization, and in the 1930s several joint KCA and separate Kiowa, Comanche, and Apache tribal constitutions were composed both within and outside the provisions of the Oklahoma Indian Welfare Act. The Bureau of Indian Affairs (BIA) did not specifically accept any of them. In the early 1960s a group of Comanches managed to gain control of a KCA business meeting and declared that the Comanche tribe was a separate organization. Although initially rejected by the BIA, a tribal constitution was drafted and accepted by Comanche voters in 1966.

Traditional Comanche religion was a personal matter, although there were common cultural elements. Personal power (puha) could be obtained from the spirit world and could be shared with a small group of others. The two broad kinds of power were protection in war and curing; the latter was accompanied by knowledge of herbal cures. There were a few large-scale religious ceremonies, again related to group curing, well-being, and foretelling. Some herbal knowledge has been maintained.

Comanches probably learned about peyote circa 1800 as they moved into southern Texas and northern Mexico. It was first used as a war-foretelling medicine. In the late 1880s and early 1890s a small group of Lipan Apaches moved from New Mexico to Oklahoma and brought a new peyote ritual to the Comanches. Initially suppressed by the federal government, it was formally incorporated as the Native American Church in 1918.

Under Pres. Ulysses S. Grant's "Peace Policy," the Society of Friends (Quakers) were assigned as agents to the Kiowa-Comanche-Apache reservation; they made little headway. In the 1890s Roman Catholic, Episcopal, Baptist, and Mennonite missions were established. Although most of the missionaries were white, from the 1890s Comanches served as deacons, preachers, and ministers. Hymns were composed in the Comanche language using Comanche musical forms or adapting European melodies to Comanche.

In the 1880s Comanches were among the students at the Hampton Institute and Carlisle Indian Industrial boarding schools in Virginia and Pennsylvania, although relatively few attended those schools (a total of fifty-eight Comanches attended Carlisle). Attendance at Fort Sill Indian School in Lawton and at Riverside in Anadarko was more common and of late, after the closing of the former, Comanches have attended the local public schools. In recent years Comanches have attained advanced degrees in many fields including law, education, and divinity.

Although the Comanche language was once spoken across the southern plains (and was sometimes called the "court language of the Plains" due to its wide use), the number of speakers has declined. There are two Comanche language dictionaries in print, and Numu Tekwapuha Nomnekatu, the Comanche Language and Cultural Preservation Committee, has worked to reestablish knowledge of the language through a number of primers. Several Comanche-language story texts and a hymnal have been published.

The prereservation Comanches never held an exclusive membership policy. Many traced their ancestry to Arapahos, Crows, Shoshones, and even Hopis and other Pueblos. From the early eighteenth century Spaniards, Mexicans, and later Anglo-Americans and German-Texans were captured and adopted into Comanche families. However, the claim that fewer than 10 percent of the Comanches alive in the 1930s could be called "full blood" is probably an exaggeration.

The following (as per The Chicago Manual of Style, 17th edition) is the preferred citation for articles:
Thomas W. Kavanagh, “Comanche (tribe),” The Encyclopedia of Oklahoma History and Culture, https://www.okhistory.org/publications/enc/entry?entry=CO033.