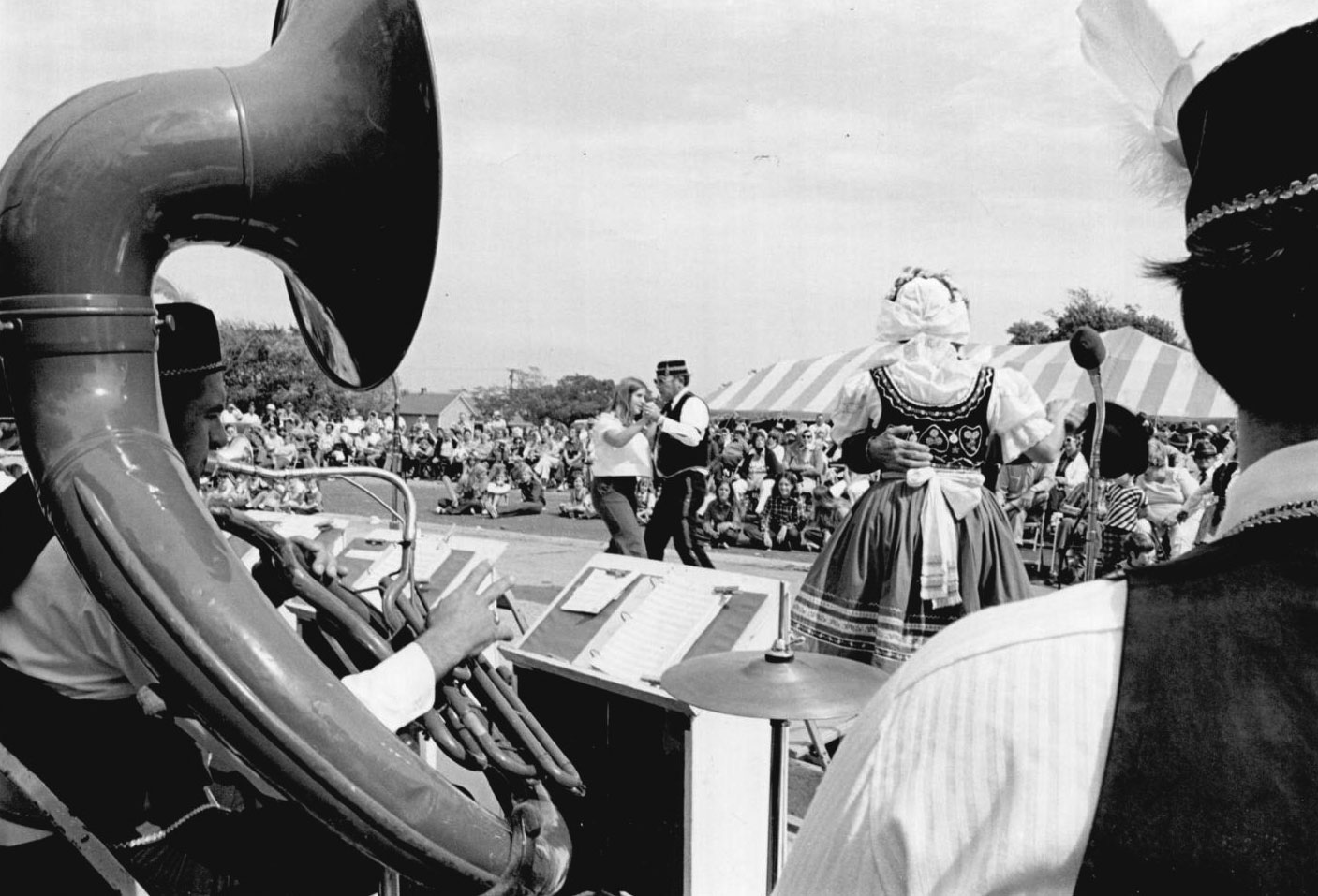 Prior to the formation of Czechoslovakia in 1918, the term "Czech" was used to describe speakers of the Czech language living in the historical "Czech lands" of Bohemia, Moravia, and part of Silesia, within the Austrian Empire. Czechs were part of a large Austrian emigration to the United States from the mid-1850s to the beginning of World War I. Among the sooners who illegally claimed land before the Land Run of April 22, 1889, were about twenty-five Czech Americans led by Anton Caha, a Moravian who had been born in the village of Klanchov in the 1850s. As a youth Caha had immigrated to America with his mother and stepfather, and he spent the first part of his adulthood in a Czech settlement in Colfax County, Nebraska. With a background as a militia leader in the Second Sioux War (1876), Caha was an adventurous man who led his Czech group into the Unassigned Lands and attempted to stake his claim at a location near the confluence of Mustang Creek and the North Canadian River prior to the legal opening. Like many others, the Czech sooners were prosecuted for their breach of the law, and Caha himself served a two-year sentence in the federal prison at Leavenworth, Kansas, before returning to Oklahoma and establishing himself as a respectable citizen.

The first major Czech settlement in Oklahoma developed in the location chosen by the Caha party. Lying west of Oklahoma City, the site incorporated the Canadian County townships of Yukon, Mustang, and El Reno. Shortly afterward, Czech family groups settled in the area that later became Kingfisher County and in the community of Mishak, Boone Township, Oklahoma County. These first groups were typical of the Czech Americans who would continue to be attracted to Oklahoma in the following two decades. The majority came from immigrant colonies that had been previously organized in Nebraska, and others came from Kansas, Iowa, and Texas. Furthermore, many of the Nebraska Czechs had previously emigrated from Wisconsin, and many from Kansas had come via Chicago.

Two additional areas of early Czech settlement include Lincoln County, where homesteads were established after the lands of the Sac and Fox Reservation were opened in September 1891, and Garfield, Grant, and Noble counties, established when the Cherokee Outlet was opened in 1893. There was no further significant Czech immigration into Oklahoma prior to 1907 statehood. The number of Czech "foreign white stock" in Oklahoma measured by the 1910 U.S. Census was 5,633. This figure included 1,624 foreign-born individuals as well as sons and daughters of at least one foreign-born parent. About two-thirds of them lived in ten north-central counties. The Czechs ranked fourth among non–English-speaking foreign stock in Oklahoma, after German, Hispanic, and Italian groups.

In the areas of their highest concentration Oklahoma Czechs, primarily involved in farming, exerted a significant influence on regional culture. The Czechs were associated with relatively intensive farming practices, emphasizing diversification of crops and conservation of resources. Women and children often participated in fieldwork. Oklahoma Czech farming communities, influenced by the traditions of peasants and small landowners from Central Europe, were networks of extended families characterized by egalitarian values and a common way of life. Cooperative activity among the people took various forms and was pervasive.

Like other Czech Americans in the Midwest and in Texas, the Oklahoma Czechs supported a variety of ethnic organizations and clubs, most notably, the fraternal societies that provided life insurance protection for its members as well as centers for social activities such as meetings, dances, picnics, and various festivals. The Česko-Slovanský Porporující Spolek (CSPS, Czech-Slavic Benevolent Society) was one of the earliest fraternal orders in the United States, beginning informal operation in a St. Louis tavern in 1854. By the 1880s it had established lodges in Czech communities throughout the country, including Oklahoma. However, in 1897 the CSPS lodges west of the Mississippi split away to form the Zapadní Česko-Bratrská Jednota (ZCBJ, Western Bohemian Fraternal Association). The ZCBJ grew rapidly in Oklahoma until the time of World War I and, after renaming itself the Western Fraternal Life Association in 1971, remained an important social institution among Oklahoma Czechs. After the first state lodge was established in Prague in 1897, other locations quickly followed: Perry (1898), Yukon (1899), Kingfisher (1900), Oklahoma City (two lodges, 1900 and 1901), Garber (1901), Medford (1903), Willow (1903), and Morrison (1907). In 1910 three new lodges were established, in Prague, Waukomis, and Willow, but after that, growth was slower. For many Oklahoma Czechs the local ZCBJ lodge hall served a function similar to that of a church for other ethnic groups and was commonly the site of weddings and funerals, for example. Another popular Czech cultural institution in Oklahoma and other parts of the United States was the Sokol (Falcon). Founded in Bohemia in 1862 by Miroslav Tyrš, it was a gymnastic society that, in addition to athleticism, promoted Czech nationalism and educational ideals. The first Sokol club in Oklahoma was organized in Yukon in 1898.

Czechs immigrants brought with them an especially complex and troubled religious heritage. Although the majority had been nominal Catholics in their homeland, loyalty to the church was often associated with the oppressive Hapsburg monarchy that had persecuted native Czech Protestants after defeating their forces at the decisive 1620 Battle of White Mountain. In addition, many of the immigrants had been influenced by the Czech Freethought movement (Svobodomyšlení), which was popular among Czech nationalists in Europe in the mid- to late- nineteenth century. Both the fraternal lodges and Sokol were associated with Freethought in the early years of their history. A majority of the early Czech settlers in Oklahoma probably can be classified as freethinkers, but only a few were militant atheists or agnostics. Much more common was a vague anticlericalism or an indifference to religion. Although they were in a minority, Oklahoma Czech Catholics founded some distinctive and enduring parishes, including St. Wenceslaus in Prague (1891), St. John Nepomuk in Yukon (1894), St. Martin's in Mishak (1905), and St. John in Bison (1909).

One of the most remarkable aspects of Czech-American culture was the development of a Czech-language press. At least 326 Czech serial publications were established during the period 1860–1910, and they helped to maintain a sense of the Czechs as a distinct ethnic group in spite of religious and cultural divisions within Czech centers in various parts of America, and the lack of a Czech national state in Europe to provide a unifying symbol prior to 1918. Because of the relatively low population in Oklahoma, efforts to establish independent Czech newspapers were not very successful, although during the years 1905–10 there were at least three such publications, notably the weekly Český Oklahoman (Czech Oklahoman), published by the Bohemian Printing and Publishing Company in Oklahoma City. However, special Oklahoma editions of Czech periodicals published outside the state were popular and successful for many years. Beginning in 1905 the Geringer publishing house in Chicago produced a special semiweekly edition of its Czech newspaper Svornost called Oklahomské Noviny (Oklahoma News) in Oklahoma City for about fifty years. The National Printing Company of Omaha, founded by Jan Rosický, for several years also published a Czech newspaper aimed at Oklahomans, the Česko-Slovanský Obzor (Czech-Slavic Horizon).

Like other Czech-Americans, Oklahomans of Czech descent celebrated the birth of Czechoslovakia in 1918 as a joyous event, but subsequent historical developments–the Nazi occupation of Czechoslovakia that began prior to World War II, and then the long Communist era that began soon after the war and lasted until the Velvet Revolution of 1989 made contact and identification with the homeland problematic for many years. After 1989 it was possible for Oklahomans of Czechs descent to travel freely to Czechoslovakia and then to the Czech Republic (after the division of Czechoslovakia into the Czech and Slovak republics in 1993) in order to visit their ancestral homeland. In Oklahoma at the beginning of the twenty-first century, there was evidence of a continuing Czech ethnic identity in two major annual festivals, the Kolache Festival in Prague and the Oklahoma Czech Festival in Yukon.

Russell Lynch, Czech Farmers in Oklahoma: A Comparative Study of the Stability of a Czech Farm Group in Lincoln County, Oklahoma, and the Factors Relating to Its Stability, Oklahoma Agricultural and Mechanical College Bulletin, Vol. 39, No. 13 (Stillwater: Oklahoma A&M College, 1942).

Ronald Naramore, "Ethnicity on the American Frontier: A Study of Czechs in Oklahoma," Papers in Anthropology 14 (Spring, 1973).

Hermina Rabstejnek, "A Tribute to Oklahoma and Its Czech Pioneers," in Panorama: A Historical Review of Czechs and Slovaks in the United States of America, ed. Vlasta Vraz (Cicero, Ill.: Czechoslovak National Council of America, 1970).

The following (as per The Chicago Manual of Style, 17th edition) is the preferred citation for articles:
Clinton Machann, “Czechs,” The Encyclopedia of Oklahoma History and Culture, https://www.okhistory.org/publications/enc/entry.php?entry=CZ001.