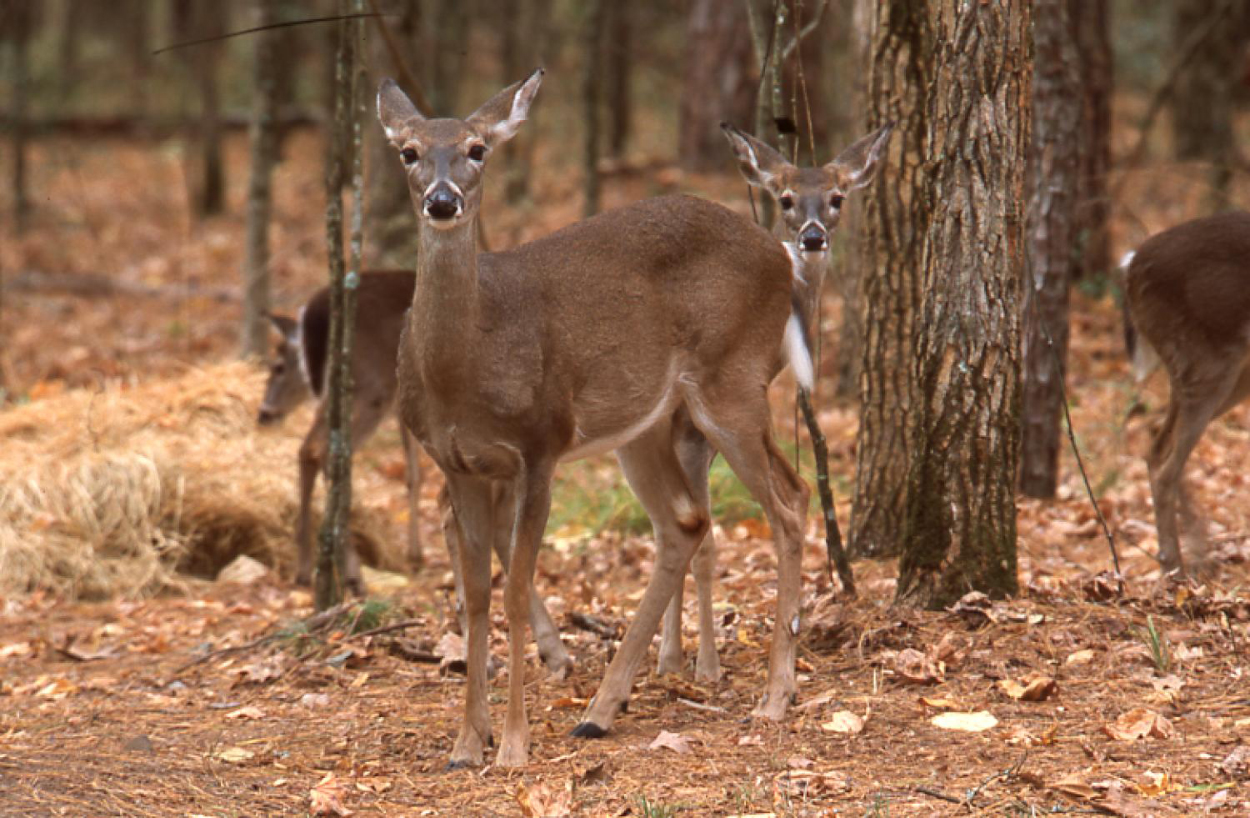 Two species of deer occur in Oklahoma. The wide-ranging white-tailed deer (Odocoileus virginianus) can be found in almost any part of the state, whereas the mule deer (Odocoileus hemionus) is restricted to northwestern Oklahoma and the Panhandle. Where the two species overlap, white-tailed deer generally prefer moister habitat, such as river bottoms, and mule deer prefer drier uplands. Deer are predominantly browsers, feeding on leaves, twigs, acorns, and berries, but will graze grasses and feed on agricultural row crops.

Deer are members of the mammalian order Artiodactyla, family Cervidae, which also includes elk, moose, and caribou in North America. Both deer species are medium-sized cervids. Male mule deer range in size from 155 to 330 pounds (70 to 150 kilograms), and male whitetails range from forty-nine to three hundred pounds (22 to 137 kilograms). Females of both species are smaller than males. Body size varies significantly with latitude in white-tails; for instance, northern individuals are much larger than the Florida Key deer, a white-tail subspecies. In Oklahoma the mean weights of adult males are near the middle of the range reported above, approximately 132 pounds (60 kilograms). Male "rut," and mating occurs in the fall with females commonly giving birth to twins after a seven-month gestation period. Antlers of males are shed after the rut and begin regrowing in late April or May.

White-tailed deer are the most important big-game mammal in Oklahoma. Prior to European settlement, there may have been as many as twenty-three million to forty million white-tails; and they were a principal source of meat for numerous American Indian tribes. These peoples used the entire animal, wasting nothing. With the advent of commercial and food exploitation by European settlers, white-tailed deer were nearly driven to extinction. By the late 1800s only three hundred thousand to five hundred thousand individuals remained. At the end of the twentieth century, as a result of sound management techniques, harvest regulations, and reintroductions, white-tailed deer have recovered, numbering around fifteen million in North America.

The following (as per The Chicago Manual of Style, 17th edition) is the preferred citation for articles:
Gregory A. Smith, “Deer,” The Encyclopedia of Oklahoma History and Culture, https://www.okhistory.org/publications/enc/entry.php?entry=DE004.