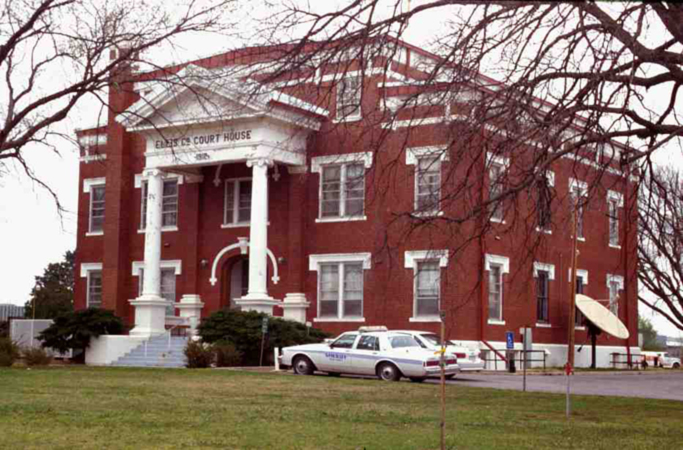 Settlement by non-Indians transpired in the late 1800s as the region developed as a transportation corridor. From the mid-1870s to the 1890s the Fort Supply (Indian Territory) to Fort Elliott (Texas) military road crossed the area, passing near present Fargo and present Gage, southward toward present Arnett, and southwestward into the Texas Panhandle. Serving troops and supply wagons, the route also had civilian stage stops, most notably at the crossing of Wolf Creek near Fargo and near Gage. In the 1880s the Western (cattle) Trail from Texas to Kansas intersected the military road a few miles northeast of Fargo. In 1886–87 the Southern Kansas Railway, later owned by the Atchison, Topeka and Santa Fe Railway system, constructed a line southwest from Kiowa, Kansas, through the future county, and along the tracks emerged Fargo, Gage, and Shattuck. A large settlement of Germans from Russia around Shattuck in 1901–02 gave Ellis County's history an ethnic aspect. By 1910 Ellis County's population of 15,375 included 526 ethnic Germans born in Russia and several thousand American-born family members.

The disappearance of the rural schools reflects highway development in the 1920s and 1930s and, at the same time, population shift to urban areas. State Highway 46 and U.S. Highway 283 cross the county north-south, and State Highway 15 and U.S. 60 cross it east-west. Good roads facilitated commuting to jobs in larger towns, often in other counties. In 2010 the incorporated towns included Arnett (the county seat), Gage, Shattuck, and Fargo. Unincorporated communities included Catesby, Peek, and Harmon.

The following (as per The Chicago Manual of Style, 17th edition) is the preferred citation for articles:
Dianna Everett, “Ellis County,” The Encyclopedia of Oklahoma History and Culture, https://www.okhistory.org/publications/enc/entry?entry=EL008.