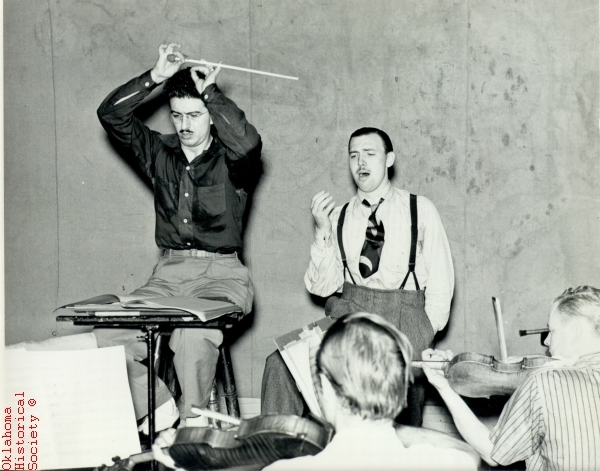 The federal government recognized that the Great Depression caused hardship and unemployment for white-collar workers and artists as well as laborers. Consequently, the government made a few efforts to assist the unemployed during the New Deal's early years, but under the Works Progress Administration's work relief program, beginning in late 1935, white-collar workers and artists received their greatest support. Collectively known as Federal One, projects were set up in most states for musicians, artists, writers, and actors.

Dean Richardson served as Oklahoma director of the Federal Music Project (FMP). His job involved identifying Oklahoma's skilled musicians who were on relief, and thus eligible for assistance, and assigning them to various projects. These included creating a symphony in Tulsa, placing music teachers in ninety-two small schools, and establishing an African American dance band and dance bands in Ardmore and Shawnee. The projects, popular with the people, fulfilled the FMP mission, which was to provide work for deserving artists and enhance people's cultural lives.

The Oklahoma FMP, like other states' projects, experienced some difficulties. Federal appropriations could not support all deserving artists, and some were inevitably left out. In addition, conservatives generally opposed the principle of federal aid to the unemployed and resisted New Deal projects. This problem surfaced quickly in Tulsa, where the local symphony supporters were willing to take federal money but were not willing to follow federal guidelines. As a result, federal support for the Tulsa symphony was terminated, and it folded in 1937. A civic symphony was not reactivated in Tulsa until 1948. The federal symphony project then moved to Oklahoma City, and it functioned as a relief project until 1939. In 1943 the Oklahoma City Symphony Society took over sponsorship and gained full control.

All Oklahoma FMP projects, except the Oklahoma City Symphony, ended in 1943. The projects never employed more that five hundred people, but they brought entertainment and culture to thousands.

The following (as per The Chicago Manual of Style, 17th edition) is the preferred citation for articles:
Kenneth E. Hendrickson, Jr., “Federal Music Project,” The Encyclopedia of Oklahoma History and Culture, https://www.okhistory.org/publications/enc/entry.php?entry=FE003.