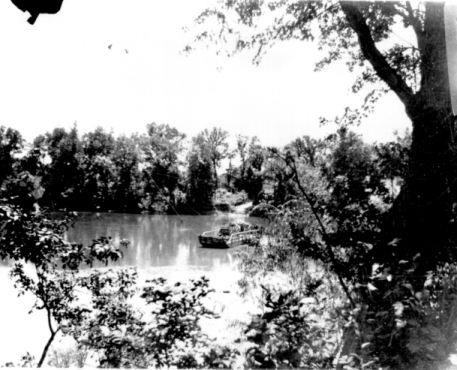 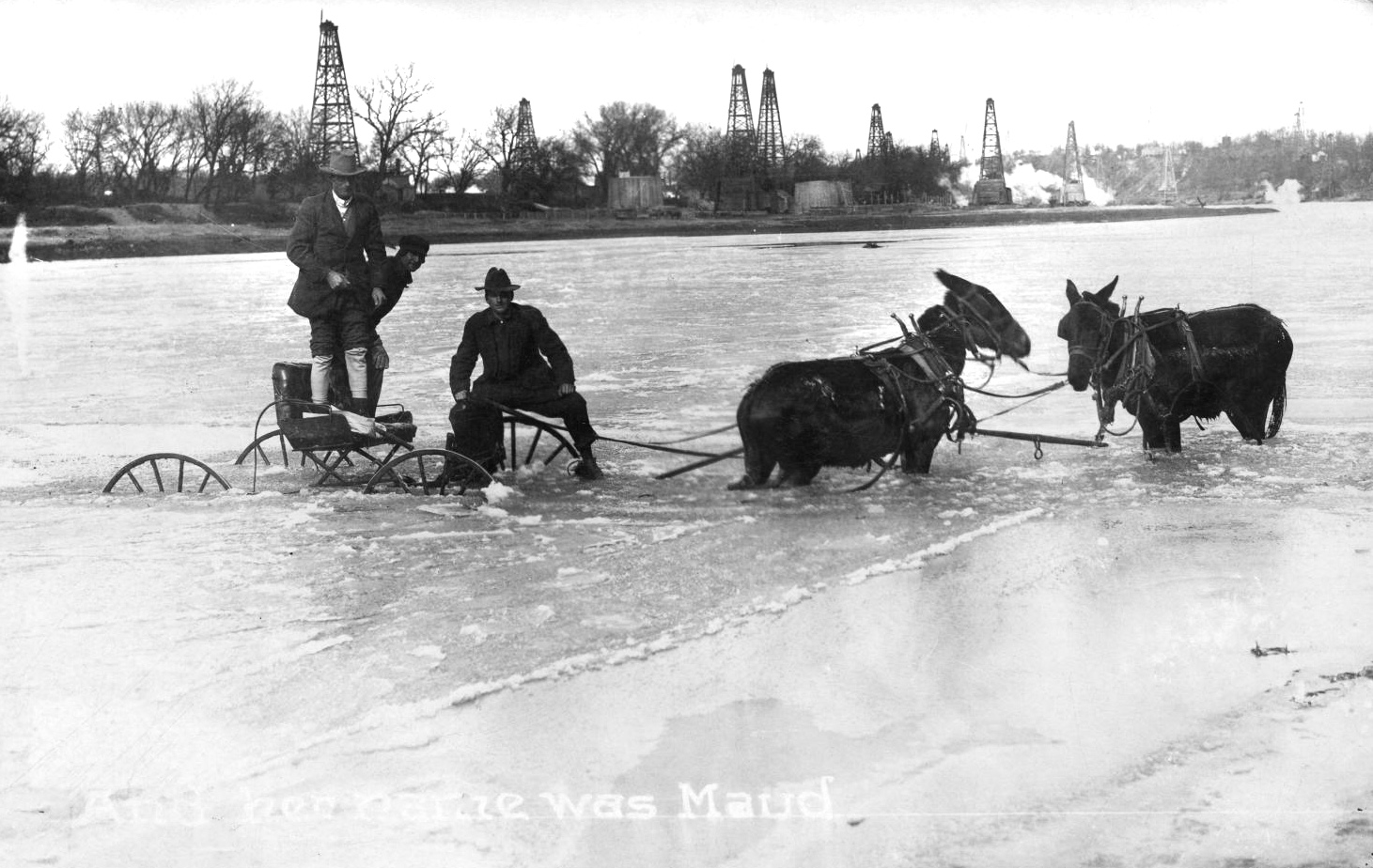 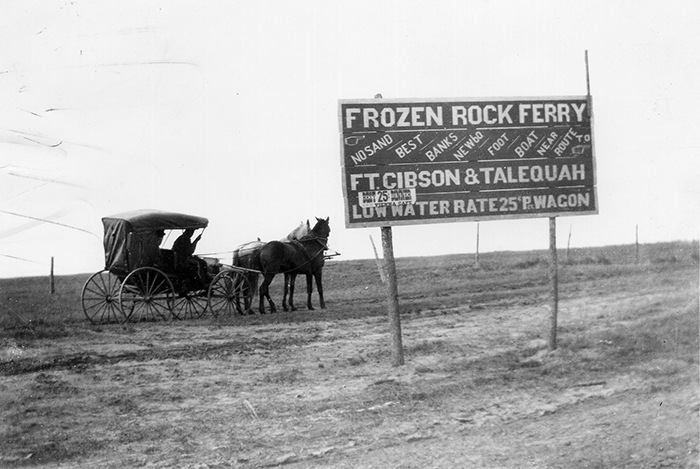 In the nineteenth century the rivers and streams of Indian Territory provided a barrier to travel, and even when they were relatively dry, their quicksand proved a danger. As the federal government forced the Five Tribes to Indian Territory in the 1820s and 1830s, enterprising individuals set up business with flatboats, using poles, ropes, cables, and, later, steam engines to carry people and cargo across the hazardous waterways. These crossings were often placed at a natural ford that had been historically used by tribes such as the Osage. To facilitate the movement of troops, supplies, and information between forts the U.S. Army operated ferries, including one across the Neosho near Fort Gibson.

Tribal governments soon began to regulate the ferry industry. In 1849 the Cherokee National Council passed an act that set an annual tax at twenty five dollars per ferry on the Arkansas, Canadian, or Grand (Neosho) rivers and five dollars per boat on the Illinois or Verdigris rivers. The law also stated that a licensed ferry must transport every traveler promptly during reasonable hours (except on Sunday) and that no other ferry could be opened within one-half mile of an established landing. Ferries within the Cherokee boundaries included the Ballew, Foreman, and Woods on the Illinois River; Rogers, Carey, McCracken, Markham, and Mayes on the Grand; Nevins at the mouth of the Verdigris; Lynch, Frozen Rock, and Smith on the Arkansas; Vann on the North Canadian; and Rip O'Lowe on the South Canadian. Several other Cherokee entrepreneurs earned income by taking people across the nation's many creeks and rivers.

The Chickasaw and Choctaw nations also required operators to obtain a license, and the governments set the fees. For example, in 1884 the Chickasaw Legislature granted William P. Worthington the right to operate a ferry on the Red River and allowed him to charge fifty cents for a wagon, ten cents for other stock, two-and one-half cents for sheep, goats, and hogs, twenty-five cents for a man and a horse, and ten cents for a footman. Beale, Colbert, Fleetwood, Kemp, Rock Bluff, Thompson, and Worthington ferries on the Red River, Fourche Maline on the Fourche Maline, Folsom on the Arkansas, Pitchlynn on the Poteau, and Wolner on the Washita were a few of the many ferries in the Chickasaw and Choctaw nations.

The Creek council also issued permits for ferry operators and usually provided that Creek citizens could cross without a charge. On the Arkansas River travelers used the Bixby, Drew, Gentry, Leacher, Smith, Perryman, and Texas ferries. The Porter ferry assisted travelers across Snake Creek, and the Chissoe ferry across the Verdigris. Moses Pooler ferry on the Neosho River served the Ottawa district, and the Audrain ferry stood west of the town of Wyandotte. Other nations also often allowed locals to utilize the ferries free of charge.

Often, the ferry operator or the owner of a toll bridge was an influential member of the nation, an entrepreneur who had a stake in transporting goods from his own considerable holdings. These included David and Robert Vann, William Carey, Joe and Mike Hilderbrand, and Joe Lynch in the Cherokee Nation, Benjamin Colbert, Peter Folsom, Charles LeFlore, Charles B. Campbell, James Tyson, Jonathan Nail, David Folsom, and John Riddle in the Choctaw and Chickasaw nations, and Pleasant Porter, L. C. Perryman, Jason Drew, and William McIntosh in the Creek Nation.

Traders occasionally operated ferries in conjunction with their stores. For example, Holland Coffee kept a ferry near the Texas Road's crossing of the Red River. Similarly, Doan's Crossing, a ford where wagons crossed the Red River, stood on the Western Trail. Several stations that operated along the Butterfield Overland Mail route contracted with the Choctaw Nation to build toll bridges or with individuals who were licensed to maintain a ferry on nearby streams or rivers. These included Geary's Stand, Riddle's Station, Nail's Station, and Colbert's Ferry. Throughout Oklahoma's history, bridges eventually replaced ferries, at or near the same sites. Railroad lines, county roads, and highways usually followed established trails that dictated where they crossed waterways.

Prominent fords were often named for the persons who controlled the land where a road crossed a river or a creek. Examples included Nail's Crossing on the Blue River; Big Jake's, Johnson's, Perkins's, and Young's crossings on the Canadian River; Gilstrap's and Adair's on the Grand River; Boudinot's, Vann's and Mitchell's on the Illinois River; Pott's on the Poteau River; Doan's, Gaines's, Fleetwood's, Love's, and Warren's on the Red River; Bushyhead's, Brown's, Stidham's, and Sullivan's on the Verdigris River, and Moncrief's, Maupin's, Fletcher's, and Moore's on the Washita River. Some fords were named for prominent geographical features or area legends. Several rivers and streams had the same name for crossings. For example, a Dead Man's Crossing could be found on Boggy Creek, Cole Creek, and the Canadian River; a Rock Crossing was on Beaver Creek, the Canadian River, the Cimarron River, Cobb Creek, and the Washita River; Chimney, Rock Chimney, or Twin Chimney crossings were on the Cimarron River, the Kiamichi River (rock and twin chimney), and the Illinois River. Another common name extolled the road or trail that the crossing served, accounting for the numerous Military and Texas Road crossings.

Ferries and fords continued to be important even after the automobile became popular and the good roads movement generated a road-building program throughout the state. In 1919 the Daily Oklahoman reported on South Canadian River's condition and its effect on ferries at Union City, Mustang, and Newcastle. In 1923 a ferry existed in Oklahoma City at Thirty-ninth Street over the North Canadian River. In 1931 the Caddo Jake Ferry opened on the North Canadian River near El Reno. By this decade most ferries on major roads had been replaced by bridges. One exception was State Highway 34 ferry across the South Canadian River at Camargo in Dewey County. The ferry operator used a tractor and trailer to pull vehicles across when the water was too high or to free a car from the mud or sand. In 1954 the state finally erected a bridge at that location. This essentially ended Oklahoma's ferry industry.

The following (as per The Chicago Manual of Style, 17th edition) is the preferred citation for articles:
Larry O'Dell, “Ferries and Fords,” The Encyclopedia of Oklahoma History and Culture, https://www.okhistory.org/publications/enc/entry.php?entry=FE014.