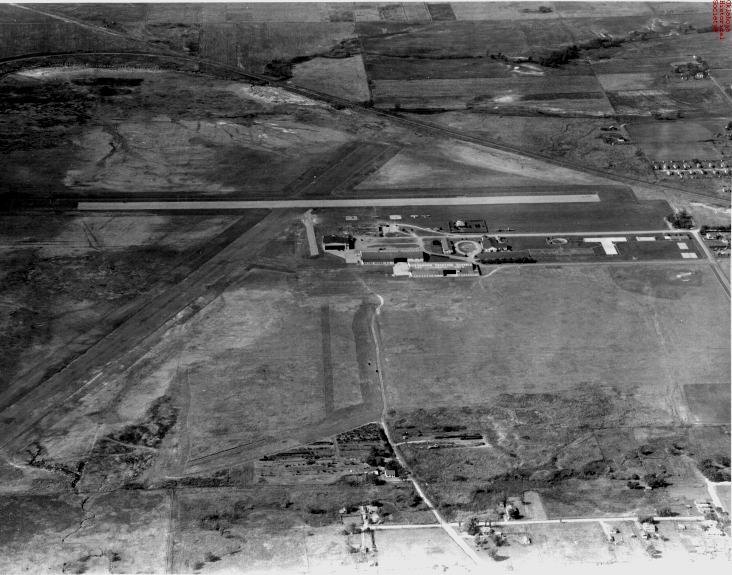 Muskogee's Hatbox Field was a general aviation airfield established in January 1921 by Joseph B. Witt and Martin H. Wood. They built the airport on 160 acres as a commercial undertaking of the Muskogee Airplane Company. The site was located three miles west of downtown Muskogee. Hatbox replaced the Oklahoma Free State Fair's grounds south of Muskogee as a flying field.

The area of Hatbox Field, formerly Overlook Park racecourse, was first used for a flying circus in early June 1920 by Okmulgee's Creek Airplane Company. It was then utilized in June and July 1920 by Joe Ben Lievre for demonstration flights in a Curtiss JN-4 "Jenny" biplane. Just before he departed, Lievre recommended the site for an airport. The land was also used by congressional candidate Alice Robertson in September 1920 when she flew to Okmulgee for a campaign speech.

Hatbox Field was first called Witt Field until Capt. Charles B. Oldfield observed from the air that the tin-roofed hangars, with walls painted in a vertical black-and-white striped pattern and the roofs a black-and-white checkered design, resembled a "lady's hatbox." The army leased rights to portions of the field and erected a new steel hangar after a fire destroyed the black-and-white structures.

Notable pilots who visited Hatbox Field included the Red Comet Grange, four around-the-world flyers, in November 1924. Charles A. Lindbergh arrived on October 1, 1927, as part of his cross-country tour following his solo trans-Atlantic flight. Amelia Earhart made an impromptu visit in September 1928. Laura Ingalls set a world record for the number of loop-de-loops at the airfield's rededication on May 26, 1930.

Muskogee sought federal assistance in paving the field's north-south runway in 1937. Then the northwest-southeast runway was paved in 1938 as a Works Progress Administration project. After the city asked the U.S. Army to establish a school at Hatbox, a Tulsa firm contracted to lease the facility in July 1940 for that purpose. Army pilots began taking preliminary flight lessons taught by the Spartan School of Aeronautics–Muskogee Division, in September 1940. The thirty-ninth and last class graduated in June 1944 ending Hatbox's role in World War II. In total, 3,732 the school graduated pilots.

The shift to jet-powered aircraft eliminated Hatbox Field from significant commercial and military use. Private pilots, however, enjoyed Hatbox's paved runways. Private and light commercial use became doubtful when questions surfaced in 1967 about the facility's value in a two-airport community. From that time alternative uses of Hatbox increased. A decade later a proposal to end flights there failed, but advancing residential subdivisions doomed the field, because area landowners increasingly voiced opposition to low-flying aircraft.

The establishment of a sports complex at Hatbox Field in 1993 foretold the field's future. Following a fatal plane crash, flying at the airport ceased in June 1998. The heritage of Hatbox Field lives on as the Love-Hatbox Sports Complex.

The following (as per The Chicago Manual of Style, 17th edition) is the preferred citation for articles:
Wallace F. Waits, Jr., “Hatbox Field,” The Encyclopedia of Oklahoma History and Culture, https://www.okhistory.org/publications/enc/entry.php?entry=HA052.