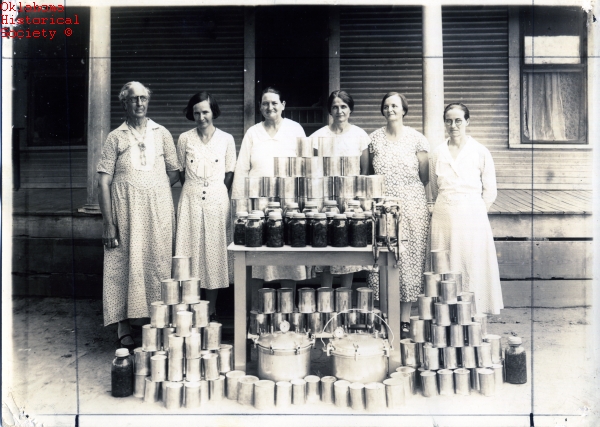 Organizations known as farm women's clubs existed as early as 1910 in Oklahoma. Gradually acquiring the name "home demonstration clubs," these groups flourished and multiplied in the state after Congress passed the Smith-Lever Act on May 8, 1914. The act mandated that state and local governments match federal funding in order to establish agricultural extension work by trained men and women agents. Their mission was to disseminate educational information on agriculture and home economics to individuals who did not attend college. As a result of the government program, which was coordinated between the U.S. Department of Agriculture and the state land-grant colleges, women agents visited the rural Oklahoma women who formed the home demonstration clubs.

When federal funding was appropriated for Oklahoma A&M College (now Oklahoma State University) in 1914, Pres. Henry G. Bennett organized the college's program to train women home demonstration agents. After their training, they traveled by train, horse and buggy, or automobile to rural Oklahoma to promote home economy. They informed women on gardening practices, poultry raising, the use of the pressure cooker to preserve meats, fruits, and vegetables, preparation of nutritious meals, sewing clothing, and household sanitation. The educational programs also provided a social outlet for rural white, African American, and American Indian women.

Before the act's passage, mothers had become interested in what their daughters were learning as members of tomato canning clubs and through 4-H work, which had started in Oklahoma in 1909. Although extension activities at this time were supposed to be limited to working with boys and girls, a Farm Women's Club formed in Stillwater in 1910, probably the first in the state. Edmond homemakers apparently established the first demonstration club in Oklahoma County. On July 27, 1910, they received help from Irma Mathews, a faculty member from A&M College, in organizing a Farm Women's Club. By 1912 Oklahoma had employed eleven women agents, including African American Annie Peters Hunter of Boley. Another early club in Oklahoma's history was the Purvis Hill Home Demonstration Club in Harmon County, organized in 1913. Women formed clubs with catchy names such as the Busy Bees, Casa La Mia, and Sunshine Club, and women who worked outside the home chose names such as After Five and the Night Owl Club.

In 1915, one year after the passage of the Smith-Lever Act, Emma A. Chandler, an A&M graduate in domestic science, was selected to direct the state's women's home demonstration work. Norma M. Brumbaugh, the third woman to hold that position, served from 1929 to 1959. By 1918 seventy-three of Oklahoma's seventy-seven counties had home demonstration agents, with four African American agents serving Lincoln, Muskogee, Okfuskee, and Okmulgee counties.

Home demonstration club members held monthly meetings in homes, schools, and churches, and a county agent or a district representative would give demonstrations on home economics. Eventually some organizations purchased and furnished a small building to serve as a club house. For example, by 1941 ten of the fourteen Harmon County organizations had club houses. Some home demonstration clubs met bimonthly, with one meeting for business purposes and the second meeting for an all-day sewing and quilting get-together. Their quilts and sewing projects helped the needy in their respective communities. Pride in accomplishment culminated when the women entered their canned goods and sewing projects into competition at the county and state fairs.

In 1910 the "Better Wheat" train, with speakers from Oklahoma A&M, Texas A&M, the Oklahoma Board of Agriculture, and the U.S. Department of Agriculture, came to Oklahoma City. Women observed demonstrations on bread making using different types of flour. During the Great Depression agents taught women to remake clothes and to make mattresses. The mattress-making program extended into seventy-five Oklahoma counties. In the early 1930s McCurtain County farm women used surplus cotton to make two thousand mattresses. Community canning centers opened in Krebs and other small rural towns; the demonstration club furnished canning equipment, and the city furnished gas, water, and a kitchen. During World War I and World War II club members worked with the Red Cross, helped with the war bond and saving stamp drives, conserved home resources, and performed other vital tasks on the home front. For instance, extension agents actively worked with county clubs to save cooking grease to be used to make explosives during World War II.

After the war the home demonstration movement remained vigorous. In 1952 the Oklahoma Agricultural Extension Service annual report indicated that in 1951, 119,126 Oklahomans had made home improvements, with 27,267 residents being reached for the first time as a result of home demonstration work. Major emphasis continued in food conservation and sewing. In 1952 alone, agents assisted almost 200,000 families in food production and preservation and 83,000 Oklahomans in conserving clothing and home furnishings. By 1954 Oklahoma's seventy-seven counties had 1,935 home demonstration clubs with 36,916 members.

As technology and women's needs changed, the kinds of information distributed by agents changed. During the 1950s freezers replaced the need to can foods, and ready-made clothing relegated sewing to a hobby. In the 1960s as more women worked outside the home, the thrust of home demonstration projects shifted toward building stronger families and managing family resources. In 1968 the name changed to Extension Homemakers Groups. By the 1980s women working full time benefited from quarterly mailings that kept them informed of the latest in food preparation and nutrition.

At the turn of the twenty-first century extension work, open to both genders, continued under the new name of Oklahoma Association for Family and Community Education, adopted in 1992 when state membership numbered 14,568. From 1991 to 1994 Oklahoman Judy Weinkauf served as president of the National Association for Family and Community Education. Tulsa had hosted the national conference in 1948 and 1995.

Grace Lee Spivey, "The Need For Content in Home Demonstration Programs as Indicated by Club Members in the State of Oklahoma" (Ph.D. diss., Cornell University, 1963).

The following (as per The Chicago Manual of Style, 17th edition) is the preferred citation for articles:
Linda D. Wilson, “Home Demonstration Clubs,” The Encyclopedia of Oklahoma History and Culture, https://www.okhistory.org/publications/enc/entry?entry=HO020.