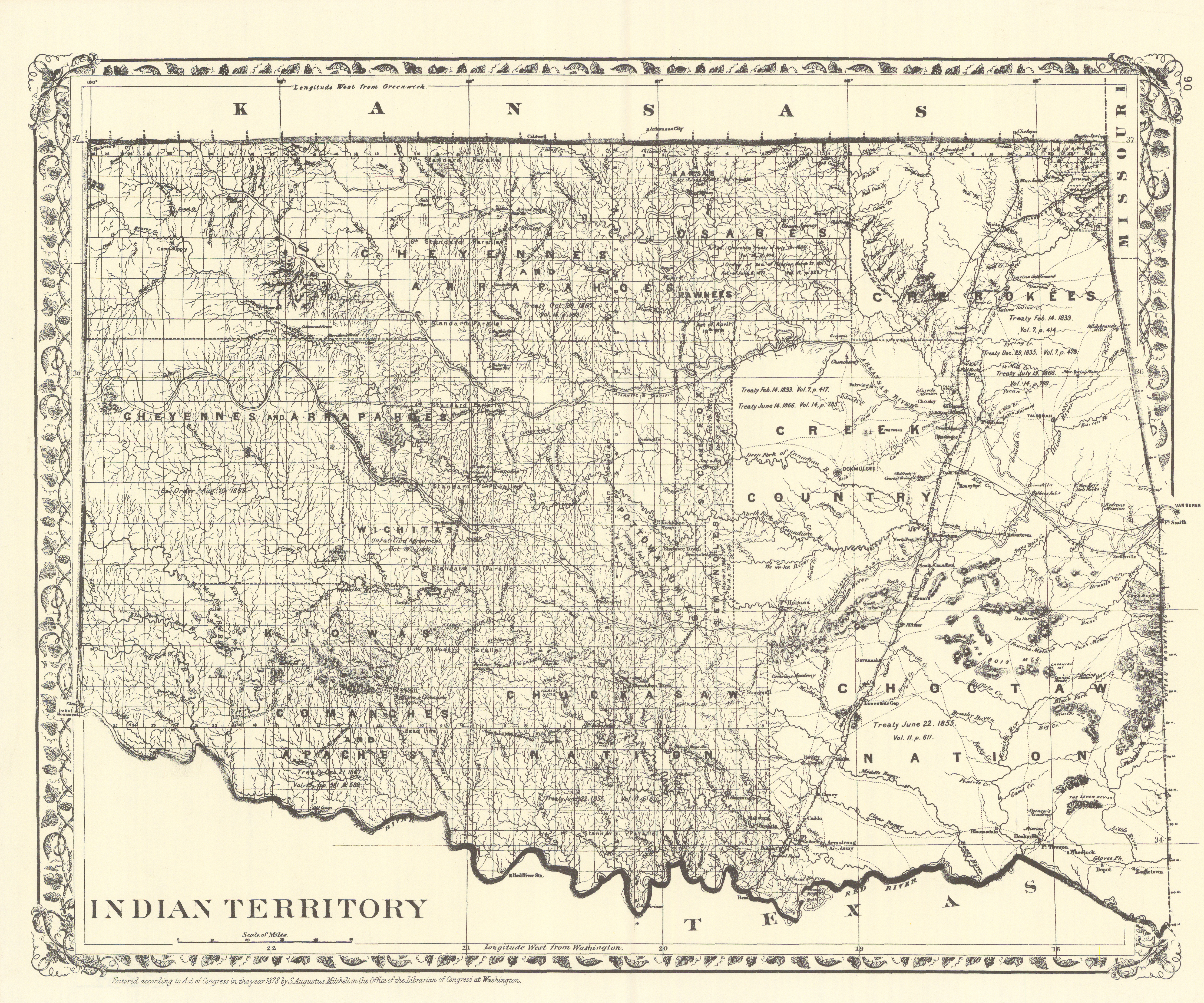 
INDIAN RESPONSE TO THE BOOMER MOVEMENT.

The Boomer Movement represented the aspirations of potential homesteaders in Indian Territory, but to the citizens of its Indian nations the movement symbolized their perennial fear that they would once again face dispossession and removal.

Federal laws and treaties barred all non-Indians from Indian Territory, except federal employees and residents under permit of the Indian governments. "Intruders," those illegally in the territory, were subject to expulsion by federal troops for the first offense, with a thousand-dollar fine added for each subsequent offense. Non-Indian immigration, legal or otherwise, accelerated in the post–Civil War period with economic development of the territory, which included railroad construction, expansion of the range-cattle industry, and increased tenant farming. Some immigrants from "the States" held permits, but many more were intruders willing to flout Indian and federal regulations to exploit Indian resources. The principal chiefs of the Five Tribes called in vain on the federal government to honor its treaty obligations to remove these invaders; so by the late 1870s Indian citizens began to fear submersion in an "alien flood" of immigrants.

In this context, then, Indian citizens saw the Boomer Movement that developed in the late 1870s as especially ominous. Already non-Indian residents of new railroad towns such as Muskogee complained about the lack of civil rights under Indian regimes and called for "home rule." At the same time, businessmen in neighboring states protested that the exclusive Indian Territory was an obstacle to development of the whole southern plains region. Its population of "savages," in their opinion, should be exported elsewhere, perhaps to Alaska. In Washington, D.C., the railroad lobby agitated constantly for the opening of the territory to non-Indian settlement, thus to maximize profits through development of new markets. Consequently, each year bills to dissolve the Indian governments, open the Indian lands to homesteaders, and require formal territorialization were introduced in Congress. In self-defense the Indian nations annually sent diplomats, called "delegates," to the federal capital to argue against such legislation and to remind the federal government of its treaty obligations to protect Indian nations' borders, sovereignty, and land tenure.

This tension escalated sharply after February 1879 when Elias C. Boudinot, a Cherokee railroad promoter, announced in the Chicago Times that some two million acres in Indian Territory had never been assigned to any tribe. These formerly Creek and Seminole lands, ceded by them under duress in their Reconstruction treaties, were, in his opinion, public domain and were therefore eligible for homesteading. "Boomers" who sought the opening of the territory to non-Indian settlement seized on his rationale to challenge their exclusion from the lands they called "Oklahoma." Boudinot's widely publicized argument threatened to turn the seepage of immigrants into the territory into that dreaded "alien flood." Understandably, some Indian leaders vilified Boudinot as "the Benedict Arnold of the Indian Race."

Realizing that Boudinot's article might set off a large-scale intrusion, the principal chiefs quickly moved to counter it. The following month, the Creek principal chief warned the chiefs of the Sac and Fox, Kickapoo, and Shawnee tribes—those nearest the Unassigned Lands—to keep watch for intruders and to report them to their agents for expulsion. Then the leaders of the Indian nations called the first of a series of international councils, drawing representatives from many territorial tribes. The councils emphasized the dangers of intrusion and the need for unified action against the boomer threat common to them all.

Although there were a number of boomer leaders, the one who seemed most dangerous was David L. Payne. His strategy was to form colonies of homesteaders to intrude en masse into the Indian Territory. His expulsion in April 1880, followed by a second in June, resulted in his arrest and delivery to the Federal District Court for Western Arkansas for trial before Judge Isaac C. Parker. There Payne intended to challenge the laws excluding homesteaders from "Oklahoma."

The leading men of the Indian nations, many of them college educated, politically astute, and well informed by their own newspapers and delegates to Washington, D.C., understood Payne's intent and the threat he represented. Should his challenge succeed, homesteaders would quickly fill the Unassigned Lands and magnify Anglo-American pressure to dissolve the Indian nations and open the rest of the territory.

To prevent that eventuality, the international council accepted Parker's invitation to send Indian representatives to help prosecute Payne. A five-man Committee of Prosecution, representing each of the Five Tribes, first visited the boomer camps on the Kansas border to evaluate Payne's followers. Their report in territorial newspapers on the impoverished and ill-equipped would-be homesteaders dampened antiboomer rhetoric and threats of armed resistance in the Indian press. Meanwhile, the Indian delegates in the nation's capital argued for continued protection of territorial borders, including the Unassigned Lands, in congressional offices, the Department of the Interior, and the Anglo-American press.

After nine tense months, placing their faith in federal treaties, laws, and courts proved the correct course for the Indian nations in the boomer crisis. Judge Parker ruled in May 1881 that even though the Creek and Seminole nations had ceded the Unassigned Lands to the federal government in their Reconstruction treaties, they retained an interest in them. Until they yielded that interest, those lands were ineligible for homesteading. Payne and his followers would continue to be classified as intruders subject to arrest, expulsion, and fine.

Indian resistance to the Boomer Movement in the early 1880s relied on weapons wielded by politically astute Indians in the territory and in Washington. Favorable publicity, determined lobbying, and cooperation with the federal court played a role, but perhaps the most important tool was the International Councils, which rallied the tribes into unified action against a common threat.

Mary Jane Warde, "Fight for Survival: The Indian Response to the Boomer Movement," The Chronicles of Oklahoma 67 (Spring 1989).

The following (as per The Chicago Manual of Style, 17th edition) is the preferred citation for articles:
Mary Jane Warde, “Indian Response to the Boomer Movement,” The Encyclopedia of Oklahoma History and Culture, https://www.okhistory.org/publications/enc/entry?entry=IN016.