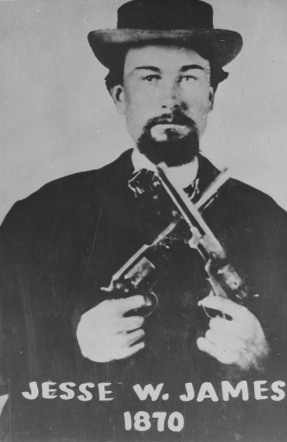 Historians generally discount stories linking the James brothers with Indian Territory. However, popular lore abounds concerning the gang's presence. The stories may derive from the brothers' association with Quantrill's Raiders in Missouri. Quantrill did operate in Indian Territory in 1863–64, but no evidence documents the James's participation there. Local legends tell that during the postwar years the Jameses and Youngers "hid out" at Robbers Cave near Wilburton, in Blue Canyon in Nowata County, at Buzzard's Roost near Cement, and on Bear Creek in Garfield County.

Further, several generations of treasure hunters have diligently sought a two-million-dollar cache or caches of gold supposedly hidden by the Jameses in the Wichita Mountains. This story was popularized in J. Frank Dobie's 1930 book Coronado's Children: Tales of Lost Mines and Buried Treasures of the Southwest, which devoted a full chapter to treasure(s) of the Wichitas and Frank James's futile effort to find the location: "Frank James bought a little farm so that he might have a strategic base from which to search." The farm in question was located near Cement and Fletcher, in Caddo County. In 1948 Lawton resident Joe Hunter claimed to have found clues that led him to part of the buried gold.

Did Frank James ever live in Oklahoma? In 1905 a traveler calling himself Frank James arrived in Muskogee. In a newspaper interview he stated that he had been near the present town of Broken Arrow in 1863 and had decided to move to that area when possible. He had returned to Indian Territory to buy farmland. Frank James may have lived on a farm near Fletcher, in western Oklahoma, from 1906 until about 1911. In February 1911 the Oklahoma City and Kansas City newspapers reported that Zerelda Samuels, mother of Frank and Jesse James, after visiting her son Frank near Fletcher, died on the train near Oklahoma City while returning to Missouri.

Did Jesse James surface in 1948 in Lawton? In May of that year a Lawton centenarian named J. Frank Dalton announced that he was Jesse James, alive and well after having faked his death in 1882. A flurry of excitement seized the town, and then the nation, when the story was broadcast on radio. Dozens of locals, as well as residents of Kearney, Missouri, either verified the story or vilified the old man. He alleged that his gang had robbed stages and trains in Oklahoma and buried the loot in the Wichitas. Dalton died in Granbury, Texas, in 1951. In 1995 the body in Jesse's Missouri grave underwent DNA testing and proved to be a James. Five years later a body exhumed from Dalton's Texas grave proved to be neither Dalton's, nor James's. Nevertheless, at the end of the twentieth century the story persisted. At the Cement Historical Museum a Jesse James exhibit details the stories of Jesse and Frank James and Joe Hunter.

Oddly, Ed Kelly, the man who killed Robert Ford, Jesse James's assassin, was killed in Oklahoma City in a gun battle in 1904 while resisting arrest. Tantalizing lore thus keeps alive the hope that the James gang may have maintained a lengthy association with Oklahoma, but hard evidence lacking, the mystery will remain in the realms of legend and tourism.

The following (as per The Chicago Manual of Style, 17th edition) is the preferred citation for articles:
Dianna Everett, “James Gang Lore,” The Encyclopedia of Oklahoma History and Culture, https://www.okhistory.org/publications/enc/entry.php?entry=JA005.